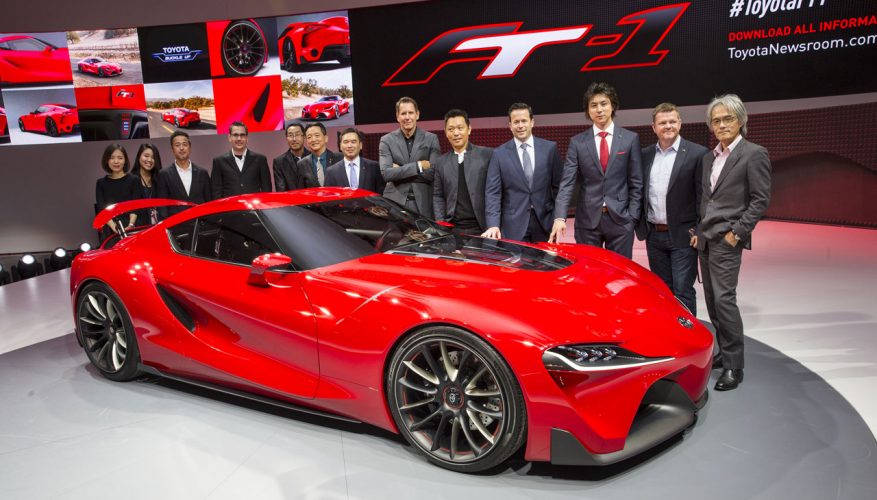 By: Simon Hill
First, Toyota launched the sporty rear-drive 86, which is marketed in North America as the Scion FR-S. Then it teamed up with BMW to develop high-end performance coupes. Now the Japanese automaker has debuted a pulse-quickening sports car concept at Detroit’s North American International Auto Show. Clearly Toyota is serious about shaking its staid image as a builder of "bland cars that your parents drive."

The unveiling was one of the few real surprises of the show, as Toyota had kept it under a tight veil of secrecy, with no teasers or leaks leading up to the big reveal. The concept, which was designed by Toyota’s North American Calty Design Research group, hints at the possible direction a new Supra might take.

The front-engine, rear-wheel drive concept is named the FT-1 (for "Future Toyota 1"), and is the result of a two-year development project described as a dream assignment and a labour of love for the designers. “Our team was heavily influenced by Toyota’s sports car past, especially Celica and Supra," said Alex Shen, Calty’s Studio Chief Designer, "and we sought to capture some of that history. It is an aggressive, track-focused sports car concept with a presence that has been amplified for shock and awe."

While Toyota’s design decisions have traditionally been driven by consensus among a large group of stakeholders, the process for the FT-1 was streamlined under company president Akio Toyoda’s stated directive to invigorate Toyota products with energy, passion and “Waku-Doki” (translation: a palpable heart-pounding sense of excitement).

Calty’s designers pitched the project to Toyoda with the help of a Gran Turismo driving simulator that bought the car to life, allowing the company president to take the concept for a virtual timed lap on a true-to-life digital representation of the Fuji speedway. An accomplished racecar driver, Toyoda completed the virtual circuit faster than his best real-world lap time at Fuji in his LFA. From that moment, he was convinced and the concept was approved to be built in model-form for the international auto show circuit.

While the FT-1 concept doesn’t offer any technical specifications beyond the basic drivetrain layout, a Toyota press release accompanying the debut promised "an ideally balanced front-engine, rear wheel-drive layout that is powered by a high-technology, high performance internal combustion engine. Beneath a transparent glass hood, an ambiguous engine cover hides a powerplant left to the imagination of the onlooker."

The low-slung cockpit is a functional, driving-focused "place of business" with an F1 inspired steering wheel, and A-pillars set far back to help optimize cornering vision. A delta-shaped display zone surrounds and integrates the driver to provide "an exhilarating sense of being connected to the vehicle."

According to Toyota’s press release, the FT-1 concept embodies the possibilities of an exciting design mission ahead. "Sports cars represent the ultimate driving expression in its purest form. As car enthusiasts ourselves, this is the kind of project we dream about working on," said Calty Design Research president Kevin Hunter. "Beyond its obvious five-alarm visual impact, FT-1 is symbolic of a new chapter for Toyota Global Design. This provocative concept truly captures the passion, excitement, and energy of the Toyota we are evolving into and embodies elements of the emotion and performance that Toyota will imprint upon future production designs."