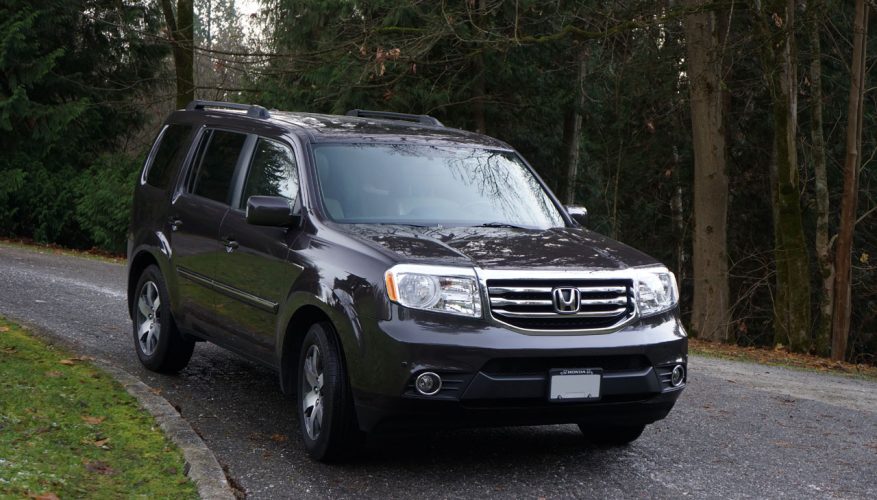 By: Trevor Hofmann
Today’s midsize sport utility vehicle comes in a variety of shapes and sizes, some sleek and sporty and others tall, boxy and utilitarian. There was a time that all SUVs were the latter, back when every single one was based on a body-on-frame truck-type chassis and designed to perform well off-road. Not anymore.

The Honda Pilot might look like a traditional sport utility vehicle, but its tall, boxy styling is just that, styling. Under the sheet metal it rides on a modified version of Honda’s midsize car and minivan platform architecture, a unibody that’s strong and tough enough to live up to 99 percent of SUV buyers’ expectations, which include hauling family and life’s gear over paved roads that are sometimes covered with snow, trekking across the occasional dirt road during summer vacation at which time a small trailer may be in tow, and doing it all in relative comfort without breaking the bank when it comes time to fill up the tank.

To this last end the Pilot gets the best fuel economy of any eight-occupant SUV at a claimed 11.8 L/100km city, 7.8 highway and 10.0 combined in front-wheel drive form and 12.3, 8.2 and 10.5 with all-wheel drive, partially because there are few other car-based crossovers that can carry eight people, this class otherwise made up of old-style truck-based, V8-powered SUVs.

The Pilot can only be had with one engine, Honda’s 24-valve, SOHC 3.5-litre V6 good for 250 horsepower and 253 lb-ft of torque. It’s the last CUV in existence with a five-speed automatic transmission, all of its rivals migrated to six-speed autoboxes or continuously variable types to save fuel, but it’s a reliable gearbox and shifts smoothly. In base trim the Pilot can be had with front-wheel drive, but most Canadian owners opt for its Variable Torque Management 4-wheel drive system (VTM-4) that improves all-weather security, not to mention while optional in base LX trim it comes standard on all higher trims.

Incidentally, that AWD system primarily powers the front wheels to save fuel, but during acceleration, when it detects wheel slippage or when put into manual lock mode, useful for more challenging terrain at speeds below 30 km/h, the rear wheels engage.

Back to trim levels, above LX the 2014 Pilot can be had as an EX, EX-L or Touring model, my tester being the latter. Base LX models, which start at $36,863 in FWD or $39,863 in AWD, plus a bit over $1,800 for freight, pre-delivery prep and levies, come nicely outfitted with the usual standard features, such as powered windows, remote keyless access, tilt and telescopic steering, illuminated steering wheel-mounted audio controls, Bluetooth hands-free phone connectivity with streaming audio, a reverse camera with rearview mirror display, a compass, cruise control, trip computer, variable intermittent wipers, intermittent rear wiper, tinted glass, and roof rails, plus a few unexpected standard items such as automatic headlamps, heated mirrors, active noise cancellation, tri-zone automatic climate control, an eight-inch TFT i-MID (intelligent Multi-Information Display), 229-watt seven-speaker AM/FM/CD/MP3 audio system with aux and USB ports plus a 2-gig CD library, an exterior temperature gauge, rear air conditioning controls, and an integrated trailer hitch, while standard safety features include four-wheel ABS-enhanced disc brakes, traction and stability control and tire pressure monitoring. All the usual airbags are there too, although it’s missing some extra ones its competitors are touting, such as front knee airbags. Eighteen-inch five-spoke alloys on 235/60 all-season tires come standard too, with larger rims and rubber available as dealer-installed accessories.

The EX-L, at $45,363 plus destination, adds leather upholstery, a leather-wrapped steering wheel, a four-way powered passenger seat, auto-dimming rearview mirror, powered glass sunroof, satellite radio, an overhead console with a handy sunglass holder plus an integrated conversation mirror for keeping an eye on rear passengers. An EX-L RES model can be had that adds rear DVD entertainment with a nine-inch display, remote control and wireless headsets featuring personal surround sound for $46,863.

Missing from the Pilot are any high-end driving aids, such as lane departure warning, cross-traffic warning, pre-collision warning and the list goes on, features that many of Honda’s competition are now offering. There’s no panoramic sunroof option either, while the two-way seat heaters could use at least another setting, as the top temperature might be a bit hot for some (I loved its therapeutic capabilities however). Expect some of these features and more when the next-generation Pilot hits the road later this year. I hope that Honda will upgrade the Pilot with some nicer finishings too, such as a bit of soft-touch plastic instead of rugged hard plastic just about everywhere; the only soft-touch surfaces are the padded door inserts and armrests while the rubberized door uppers are almost soft to the touch.

I’m guessing that not much will be done with the Pilot’s suspension system and setup when that new model arrives, mind you. Its styling is expected to be sportier than the current one, but there’s nothing at all wrong with the current Pilot’s MacPherson strut front and multi-link rear arrangement as it feels like a luxury SUV when shuffling around town and when the road starts to wind it handles quite well. After all, if it’s good enough for the very capable Acura MDX it should be good enough for the Pilot that shares the same underpinnings. There’s ample passing power and it’s quick enough off the line too, while the dash-mounted shifter has always been a favourite of mine, although Honda doesn’t take advantage of its location by adding a manual mode.

Inside, the Pilot feels a lot larger than its competitors, but it’s mostly due to its squared off design and eight-occupant capability. The front seats are big, fat and fabulously comfortable, although all that interior space meant that I needed to reach a long way to get to the dash-mounted infotainment dial; something similar on the lower console would be welcome. That lower console provides tons of storage, incidentally, along with dual cupholders. The Pilot’s second-row is very accommodating too, and the third row is actually big enough for adults. Its 60/40-split seatbacks fold completely flat into the cargo floor, creating 589 litres of capacity. The second row is split 60/40 too, and also lies completely. Fold all the seatbacks down and it makes for a cavernous cargo hold.

I put 482 kilometres on my Pilot Touring tester and must admit to loving every minute behind the wheel. It’s not the quickest, best handling or most luxurious among its peers, but there’s something uniquely special about the Pilot that really speaks to my love of true sport utility vehicles. It’s the most SUV-like of the current crop of crossovers, with upright styling, a tall ride height, and superb visibility, while it’s one of the best for toting family and gear, let alone for making those occasional trips to the buildings supply store. I like almost everything about it, which makes me worry a bit that a lower, sportier 2015 Pilot might lose some of this model’s utility and charm. The current Pilot sets itself completely apart from its competitors, something that has always made me a big fan.
©(Copyright Canadian Auto Press)
Car Shopping Tools