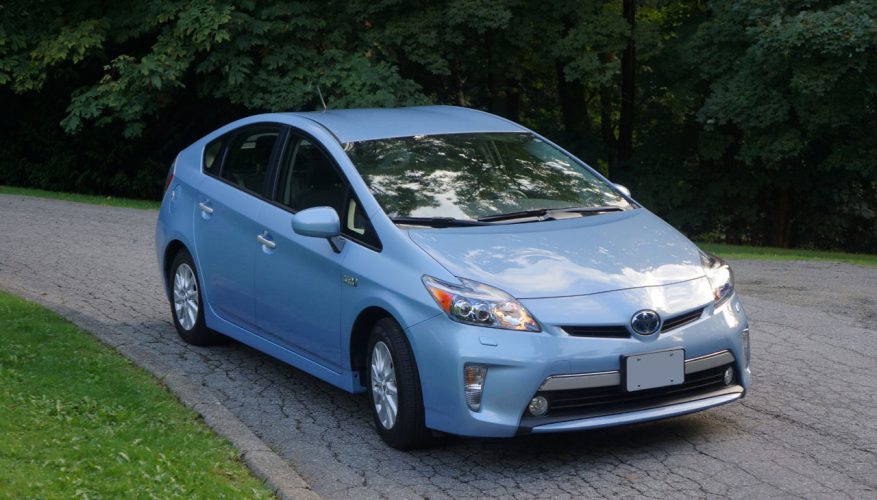 By: Trevor Hofmann
Toyota has sold more than five million Prius models around the world since the nameplate’s introduction in 2000, but that’s still a small fraction of cars sold during that time. Still, Prius sales dwarf every other gasoline-electric hybrid ever introduced, even Toyota’s own Camry Hybrid and Highlander Hybrid models. In order to build on the Prius success story, the Japanese automaker smartly expanded Prius into a brand. It’s more of a sub-brand being that the four Prius models within continue to wear Toyota’s namesake logo and are sold from Toyota retailers, but the move shows that Toyota is well aware of Prius brand power.

That power has now been channeled into the Prius Plug-in Hybrid. Toyota, which has almost singlehandedly built up global acceptance of hybrid-electric propulsion to the point that most every automaker, including sports car and supercar makers, has a hybrid or plug-in electric in production or at least on the drawing board, needed a plug-in just to stay on the cutting edge, and rather than coming up with an all-new exclusive plug-in model the best-selling Prius was the perfect candidate (and yes, I know Honda was one of the first in the hybrid game and has had some success too, but all of its hybrids together haven’t attained anywhere near the market share of the lone Prius).

Before I delve into just why the Prius Plug-in is more advantageous than a regular Prius and therefore the best choice, let’s discuss why the regular Prius does so well in the first place. Of course, there’s something called critical mass. Your neighbour bought one and always raves about passing by gas station after gas station not to mention boasting about all of its other fine attributes, and then your brother-in-law was talking to him about it over the fence during the holidays and therefore just bought one too, plus every time you turn around there’s another smiling Prius owner driving by (at least they’re smiling until they start sneering at you in your gas guzzling SUV), and now you’re feeling the pressure to go green from all directions, not to mention your kids thanks to something their favourite boy band member said about David Suzuki quoting Al Gore on Facebook (and we know all that stuff is true), not to mention a very real desire to save on ridiculously expensive fuel prices, so why not get the same trusty Prius they bought instead of rocking the boat with something totally different. After all, if thousands of cabbies think it’s a safe bet for driving hundreds of thousands of kilometres without problem (some even into the millions), why shouldn’t a Prius safely get you back and forth from work?

Some of the attributes your neighbour raves about are its general ease of use, comfortable front seats and totally accommodating midsize rear quarters, impressively large cargo area with 60/40-split rear seatbacks, a flat loading floor and handy hatchback design, plus of course fuel economy, which is rated at 3.7 L/100km city, 4.0 highway and 3.8 combined. So why not one-up your neighbor and opt for the new Prius Plug-in?

Why not indeed? Fuel economy would benefit from the decision, to a claimed 2.0 city, 1.9 highway and 2.0 combined, exactly half the gas used by the regular Prius. The reality is that you might not use anywhere near as much fuel as estimated if you live in an urban environment where EV mode likes it best and don’t travel very far each day. Then again if you have a longer commute via the highway you’ll go through your battery power faster and therefore won’t likely achieve such optimistic efficiency. Like anything, how you use it determines your results.

After a full night’s charge my Prius Plug-in showed 15.2 kilometres of potential EV range. As I’ve learned with other plug-ins and EVs, you can’t go by this range indicator alone, with projected range extended if you drive slower or faster, or in the case of my first outing, 0.2 kilometres were added as I rolled down my alley and coasted down the connecting road. Range clicked off incrementally as I silently made my way through urban streets, with nothing ticking off at all while lined up in thick morning traffic on a downhill grade ahead of the highway onramp. Once on the highway, purposely averaging just under 100 km/h (100 km/h is the point where EV mode kicks over to HEV and therefore uses gasoline), power from the 207.2-volt Lithium-ion (Li-ion) battery pack almost completely evaporated in another 9.2 kilometres, the 134 net-horsepower 1.8-litre four-cylinder Atkinson-cycle gasoline engine quietly coming to life to take me on the remaining 20-km stint of my journey. This of course meant that the entire 38.6 km trip back home was in regular electric-gasoline hybrid mode, not the most efficient way to get this car around. Just the same, even including its near 10-km highway run the Prius Plug-in managed more than 18 kilometres in EV mode, which is impressive considering Toyota only claims a total EV range of 22 km in the city.

When back home I immediately recharged it to full in about an hour and a half, and on my next outing, which was primarily urban, found my EV range went a great deal further than the 18.2 km now showing on the indicator. After a week of similar mornings and afternoons, my EV range was pretty close to Toyota’s 22 km estimation, although mileage wasn’t quite as good. It was nevertheless very good, more along the lines of the U.S. EPA numbers that rate the new Prius Plug-in at a metric-converted 2.4 L/100km city, 4.7 highway, and 3.0 combined. Like I said, I was hardly complaining.

Along the way the Prius Plug-in Hybrid was the same comfortable companion as the regular Prius I’ve tested many times before, and while the 153 lb-ft of instant torque from its 60 kW electric motor makes sure it takes off quickly the car’s continuously variable transmission (CVT) remains a bit less than sporty, then again its handling is a lot more engaging than you’d probably expect. That’s because of its light 1,435-kilo curb weight, only 55 kilograms more than the standard Prius, although the standard 15-inch alloy rims on 195/65 all-season rubber won’t elicit any cheers from the sport compact crowd. It’s a quiet cabin mind you, especially when in EV mode, that is until the beeping reverse warning system idiotically sounds off inside the car instead of outside, where it might otherwise be useful to pedestrians.

I’d love to hear someone at Toyota try to explain that one. Search “Prius reverse beeper” on Google and the first entry is “How to Disable Reverse Beep in a Toyota Prius: 11 Steps,” the second result titled “Disable backup alarm in a Toyota Prius. Stop the Beep! – YouTube,” and all additional results either complaining or helping owners disable the annoying feature. Obviously I’m not the only one who strongly dislikes it. One post claims that Toyota added it to inform new Prius owners that their car is in reverse, the odd shifter possibly causing confusion to new buyers. Well, that odd shifter has been on the market now for a very long time so maybe Toyota can give us the benefit of the doubt and remove the bleeping beeping on the next generation Prius? Please?

I happen to love the shifter. It’s an efficient little lever that looks especially nice topped off in digital-patterned clear blue plastic trim. I’d appreciate seeing more of this cool blue plastic used elsewhere, as the mostly light grey on dark grey two-tone cabin could use a little more pizzazz. I suppose practical Prius owners don’t need such excitement to spark enthusiasm, but the rest of us would enjoy a few more soft-touch surfaces to go along with the car’s impressive assortment of high-tech displays and mechanical wizardry.

Toyota will point to recyclability being the Prius’ priority instead of luxury, and they have a point. The Prius is one of the most recyclable cars available, and many of its materials are made with alternative ingredients too. I say ingredients because Toyota sources its eco-plastic from plant-sourced matter instead of petroleum, while the seat foam is made from soybeans. That’s cool, but the Softex “leather” upholstery on top of that foam in my Technology package-equipped tester is anything but cool in the heat of summer. My notes exclaimed, “Scalded my backside again!” I’m sure it’s just as intense in winter, albeit with opposite effect. At least front seat heaters come standard. Toyota should also consider standard perforated Softex with ventilation so the sticky, clammy surface breathes better.

And how much more does a Prius Plug-in cost than a regular Prius, let alone a Plug-in with all of the Technology Package model’s extras? First of all, the base conventional hybrid version starts at $26,105 and the Plug-in starts at $35,705, plus $1,620 in freight and pre-delivery preparation charges (although your computer skills will need to be close to professional hacker levels in order to find this very hidden fee in the “Build a Car” section of Toyota’s retail site). While these prices receive a big check mark beside them when building a car, as if you’ve chosen them, oddly there’s a “Standard Package” price just below that’s also preselected, which costs more at $26,360 for the base Prius and $35,960 for the Plug-in. This one is the actual price for the two models, the other “ghost” price there for some other reason. If we want to compare pricing between the two models fairly, it’s important to dress up the standard Prius with the same features as the base Plug-in, so a closer price comparison is between the regular Prius with the Moonroof Upgrade Package, which adds some of the items that come standard on the Prius Plug-in such as Smart Key access, display audio (that shows artist, song and album art for a connected iPod, navigation, infotainment with SMS-to-speech and email-to-speech capability, satellite radio, advanced voice recognition, but the Plug-in can’t be had with the moonroof with solar panels or the integrated garage door opener. This car retails at $29,605, which means the upgrade to the Prius Plug-in along with all of its state-of-the-art advancements costs $6,355 plus maybe a thousand for the missing features. If you upgrade to the Technology Package that number grows to $6,750.

Before you get discouraged at the improbability of ever paying back that much money in fuel savings, you’ll need to factor in the governmental rebates that are available. If you reside in British Columbia, Ontario or Quebec you qualify for provincial government rebates of $5,000, $8,000 and $8,500 respectively, dropping the base price to $30,960, $27,960 or $27,460. In other words, in Ontario and Quebec you’ll need to pay quite a bit more for a similarly outfitted non-plug-in Prius that doesn’t qualify for the rebates than the new Plug-in Prius. Go figure? In BC it’ll only set you back $1,355 (or so), and I’m sure it’s not too difficult to figure out how you can save that much in fuel over the life of your car.

Thanks to these provincial governments rebates, taking the higher tech option is a no brainer no matter how far you drive each day or if it’s urban or suburban driving. Those in other provinces will have to seriously consider these factors because the regular Prius is already a fine car without the plug-in upgrade. It’s certainly nice to have the choice though, isn’t it?
©(Copyright Canadian Auto Press)
Car Shopping Tools