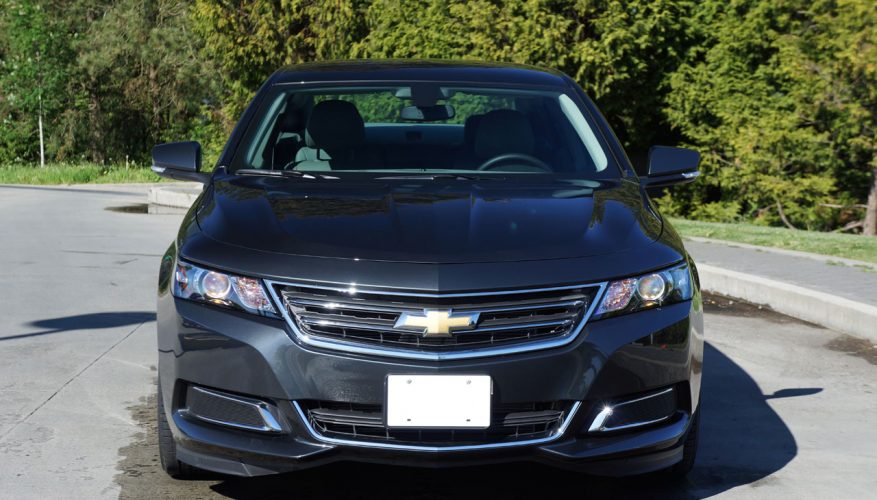 By: Trevor Hofmann
Prior to the entirely new 2014 model, the last time I drove an Impala was more than a decade ago. It was the old General’s version of a mid-to-full-size “ahem-cough” luxury car, and a good indication of why the automaker that once was the world’s largest slid to second in command and soon after almost went belly up in the global auto sales battlefield.

That was then, this is now, and the 2014 Impala is as clear an indication that a new, better-trained General has taken control of the Detroit-based company. What’s good for Detroit is also good for Canada, or at least Oshawa Car Assembly with respect to the Impala, where the big sedan is manufactured alongside the Camaro and Equinox. That it looks a bit like the Camaro from the front is hardly a coincidence, Chevrolet doing its darnedest to add excitement to its large car division so as to pull customers back from Chrysler’s 300, Dodge’s Charger, Ford’s Taurus, Hyundai’s Genesis, Kia’s Cadenza, Nissan’s Maxima, and Toyota’s Avalon, each of which has done a better job wooing full-size sedan buyers than the bowtie brand over the last decade or so. GM hasn’t exactly been asleep at the wheel, its Buick LaCrosse an impressive contender albeit trying to lure in near-premium buyers.

That Buick shares underpinnings with the Impala and Cadillac’s new XTS, all riding on the new stretched Epsilon II platform architecture that’s sometimes referred to as Super Epsilon. A drive in each will make their targeted rivals obvious, the Cadillac going after premium players like Audi, BMW, Mercedes-Benz and Lexus, the Buick courting those who might otherwise buy an Acura, Chrysler, Lincoln, or top-line Toyota, and the Chevy hunting down buyers that lean toward Dodge, Ford, Hyundai and Nissan. Whether or not the market can sustain three additional full-size sedans at a time when peoples’ purchasing decisions are at least partially biased by fuel economy is another question, but it has nothing to do with just how good each of these cars are.

First and foremost the Impala looks good. From front to back it has long, lean, elegant lines with enough curves to pull memories of Impalas past, the rear haunches reminding me of the nameplate’s late ’60s and early ’70s era. It immediately leaves thoughts of the outgoing Impala where they deserve to be, rusting away in police cruiser and taxicab scrap heaps. Driving that 2003 Impala made me feel like a plain-clothes cop, traffic immediately slowing down all around and blocking my forward progress. The new Impala turns heads for a different reason, and I’m guessing if one of our men or women in uniform drove up to the precinct in a 2014 version their coworkers might be questioning whether or not they’re on the take.

My LT tester was mid-grade, the entry-level LS below and top-line LTZ above. I’ve driven an LTZ and it nudges up against the Cadillac XTS’ levels of refinement and features, let alone the Buick LaCrosse, while the LT was impressive in its own right. A curving two-part dash assembly features leather-like soft-touch plastics on top, stitched together with contrasting thread, the same treatment given to the shroud over the primary gauges, while the surface underneath is soft to the touch too, and despite getting split in half by a thin strip of chrome and some very real looking and substantive feeling woodgrain, continues two-thirds of the way down down the dash. The same goes for the door panels front and rear, the Impala a cut above most of its competition not to mention anything Chevy has done before.

Fabric-wrapped A-pillars add to the Impala’s premium-like persona, although the middle and rear pillars aren’t so lucky. I’m being picky, of course, because everywhere else you look is a feast for hungry eyes. Blue ambient night lighting across the dash and door panels add that special touch which keeps the love alive long after the honeymoon is over, and I’m a big fan of the transparent surfaces and integrated digital temperature displays on the HVAC knobs, gorgeous! My Impala LT’s Chevrolet MyLink graphics were fabulous, too. This is easily the best General Motors car yet for digital displays. Possibly the easiest phone pairing I’ve ever experienced, Chevy’s in-car technology is also superb. There’s a USB plug in a storage compartment hidden behind the cool powered pop-up infotainment display, but it’ll be useless for charging/connecting a smartphone unless Chevy integrates text-messaging software into the infotainment system; fortunately there’s a USB in the centre console too. That system’s audio quality is quite good too, almost the only sound you’ll hear inside the Impala’s vault-silent cabin.

As mentioned my tester was finished off in LT trim, which included most of the features found on the lesser LS such as remote keyless entry with a really nice switchblade style fob, a tilt and telescoping steering wheel with Bluetooth, cruise and audio controls, a six-speaker AM/FM/CD/MP3 audio system with satellite radio and an auxiliary input, plus automatic headlights, power windows with driver auto-up/down and auto-down for all other windows, power heated mirrors with integrated turn signals, air filtration, a driver information centre, an eight-way powered driver seat, front passenger seat powered height adjuster, OnStar, a content theft alarm, electronic immobilizer, four wheel disc brakes with ABS, traction and stability control, a full assortment of airbags including two for the driver and front passengers’ knees and rear seat-mounted outboard bags, plus more. And oddly, while the much sportier award-winning new Cadillac ATS uses an archaic foot-operated parking brake, the Impala gets a state-of-the-art electronic one.

That trunk is gigantic at 532 litres, and if you fold down the 60/40-split rear seatback it turns into a veritable wagon. Rear seat room is expansive too, although seeing overtop rear passengers and that high deck lid behind is a bit difficult due to a narrow rear window.

Visibility out the front and sides is ideal, though, important as the Impala can really move with its optional V6. The base LS comes standard with a 2.5-litre four-cylinder good for 196 horsepower and 186 lb-ft of torque, while GM’s eAssist mild-hybrid powertrain can also be had, a 2.4-litre four and electric assist system capable of 182 horsepower and 172 lb-ft of torque. My tester’s 3.6-litre V6 made an invigorating 305 horsepower and 264 lb-ft of torque, good for a very entertaining sprint off the line and even more engaging run up to highway speed, although when turning during takeoff this front-driver’s torque steer is evident. You’ll need to use a toggle on top of the gearshift knob for manual mode that actually holds redline, not the two switches that feel like paddles on the back of the steering wheel spokes. I kept clicking them and the transmission didn’t shift, as they’re actually for the audio system volume control on the right side and tuning in radio favorites on the left. The V6 engine note is sweet too, and the six-speed automatic’s changes are quick and positive when on the run, relaxed and unobtrusive when tooling around town or stretching its legs on the highway where it’s ride is ultra-smooth and handling is quite good, although in tight curves it doesn’t exactly feel like a locked down sport sedan.

The highway is where the Impala is the most fuel-efficient too, the big V6 good for a claimed 6.9 L/100km when all conditions are ideal, it’s city rating said to be 11.1. That’s not too far off of the base four-cylinder’s 9.9 city and 6.3 highway rating, while the mild hybrid is better but not shockingly so at 8.7 city and 5.8 highway, and all use cheaper regular fuel.

Impala pricing is one of the reasons this car could become more popular than some of its full-size peers, with the base LS starting at only $28,445 plus $1,600 for freight and dealer prep. My tester was in 2LT trim and therefore priced out at $33,045 plus destination, while the top-line 2LTZ starts at $39,645 ahead of the aforementioned options.

With the addition of the 2014 Impala, Chevrolet now has one of the most varied car lineups in the industry. From the tiny little Spark to the subcompact Sonic and compact Cruze, the midsize Malibu and this new full-size near-premium entry, and let’s not forget the muscular Camaro, supercar-quick Corvette and ultra-green Volt. Truly the bowtie team has all bases covered.

If a big, comfortable, well-made, value-priced luxury sedan is what you’re looking for, I believe you’ll be impressed with the new Impala.
©(Copyright Canadian Auto Press)
Car Shopping Tools