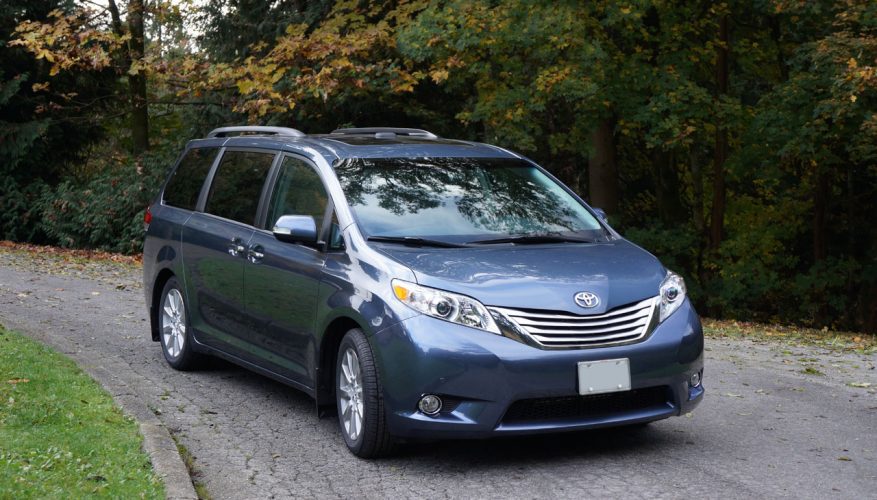 By: Trevor Hofmann
What to do, what to do? I have so many errands requiring the roominess of a van that a week simply won’t do. The question shouldn’t be what to do, but rather what to do first?

Haul a load to the dump and another one to the recycling centre. Take some more summer/fall stuff to my storage locker and pick up winter clothes and the family ski gear (if the snow ever comes). Swap the kids loft bed and the foldout sofa underneath for a new bunk bed, plus pick up a new twin mattress. Buy another shoe cabinet and some other furniture from Ikea. Go get the almost-new used stove and overhead fan/microwave from a Craigslist ad and dump the old one off at the dump. Pick up the new bathroom vanity. The list goes on and on, and then this coming weekend it’ll be loaded up with significant other, kids and luggage for a five-hour road trip to visit my brother and his family.

It’s easy to appreciate how the minivan becomes an essential part of some families’ lives. It’s a vehicle that’s near impossible to live without once you’ve become accustomed to it. Try to do everything you want to do in a crossover utility, even one of the larger seven-occupant types, and its shortcomings quickly become evident. No, the only vehicle more utile than a minivan is a full-size van, and then there’s the matter of parking it in underground and multistory lots. The minivan is clearly the way to go. So now that we’ve come to this decision, which one is best for your needs?

Toyota would like you to choose the Sienna, and for the most part it’s hard to argue against them. The Sienna is good looking, for a van, has plenty of power and handles well, for a van, gets pretty good fuel economy, for a van, can carry as much as eight occupants in comfort along with cargo, is filled with safety features, plus it’s well-built and reliable. What’s not to like?

What you want and don’t want in a minivan will come down to how you use it, and while to some folks they all might look like the same full-size monobox in a different wrapper, the various minivans currently on the market certainly have very different ways of going about the business of hauling people and cargo. There are vans that prioritize performance and then others that up the luxury ante, while some can optimize utility by folding both rear rows right into the floor. In typical Toyota fashion the Sienna fits nicely in the middle, by offering a good mix of performance, luxury and utility. No, you can’t drop the second-row seats into the floor, but they do flip forward and/or lay their backsides flat. Hauling them out in order to fit a big load of 4×8 building material is doable albeit a challenge, although when fixed in place your second-row passengers won’t complain as they’re the most comfortable captain’s chairs in the industry, at least in XLE trim where each seat integrates a “La-Z-Boy” style ottoman that can be raised for resting the legs.

My tester came with a Limited package that can only be added to XLE trim. It includes proximity sensing Smart Key access with pushbutton ignition, Optitron electronic gauges, a woodgrain and leather-wrapped steering wheel, woodgrain trim, premium leather upholstery, power-folding heated auto-dimming exterior mirrors with integrated turn signals, puddle lamps and reverse tilt-down, driver’s side memory, a four-way powered passenger seat, a navigation system, a panorama rearview camera, front and rear clearance sonar, a JBL audio system with a four-disc CD/MP3 changer, a dual-view DVD rear seat entertainment system with wireless headphones, dual sunroofs, automatic headlamps, rain-sensing wipers, and a chrome grille for $48,935 plus $1,620 for freight and dealer prep, which is $9,195 over the $39,740 XLE’s point of entry. All-wheel drive, a Sienna exclusive, can be added for a mere $1,685 over front-wheel drive in higher trims, not much to pay for the extra traction if needed.

Of course some of these items are redundant in Limited trim, but a lot of the XLE’s gear gets transferred over to the fancier van as do many features from the Sienna LE, such as three-zone independent automatic climate control, a powered driver’s seat, Bluetooth hands-free phone connectivity, illuminated entry, front centre console box, an overhead console with storage for sunglasses, steering wheel-mounted audio controls, USB audio input, XM satellite radio, a multi-information display, auto-dimming rearview mirror, an outside temperature gauge, compass, dual sliding doors, second- and third-row retractable sunshades, and a garage door opener, whereas the model’s very handy 40/20/40 second-row with stowable centre seat for up to eight occupants, easy-clean seat fabrics, and standard backup camera are exclusive to the LE trim level. And if you opt for AWD, you’ll also get heated front seats and 18-inch alloy wheels, although it comes without the stowable second-row centre seat so maximum seating is kept to seven. The Sienna LE starts at $33,365 plus destination whereas the all-wheel drive version adds $2,825 for a total of $36,190.

On top of all the LE and XLE content, a number of the base van’s features carry over into the XLE Limited including auto up/down windows, tilt and telescopic steering, an auxiliary input for the audio system, variable intermittent wipers, heated mirrors, an ECO driving indicator to help you save fuel, a flip-down conversation mirror, cruise control, rear privacy glass, a 60/40 split-folding third-row seat, front and rear splash guards, roof rails, a rear spoiler, a windshield de-icer, rear washer/wiper, and a host of safety features such as a full suite of airbags including one for the driver’s knees, plus active front head restraints, tire pressure monitoring, ABS-enhanced brakes, traction and stability control, and more. You can get into a base Sienna for as little as $29,120 plus destination charges, although it should be noted this price has gone up by about a thousand due to the four-cylinder engine being discontinued. Incidentally, base Sienna features that don’t carry over to the XLE Limited include tri-zone manual climate control, the regular removable second-row captain’s chairs, and 17-inch alloys on 235/60 all-season tires.

My favourite Sienna is the SE, a sport-tuned model that comes complete with reworked front and rear fascias, a sport mesh grille, smoked headlamps and taillights, a sweet set of 19-inch alloy rims on 235/50 all-season rubber, and other goodies to make it look and go quicker than its more conservative siblings, but that’s not to say my XLE Limited tester was a slouch.

All Siennas get Toyota’s ubiquitous 3.5-litre V6, tuned to produce an impressive 266 horsepower and 245 lb-ft of torque. It comes mated to a six-speed automatic with manual mode no less. I wouldn’t go so far to call it sporty, but it’s engaging enough through the corners, the chassis holding its own albeit for some expected body lean when pushed too hard, whereas the brakes respond well after repeated stomps, but there’s a limit to their effectiveness if overused on a winding road, so be respectful (that last point was for the teenage kids of minivan owners, not the parents). After all, the Sienna XLE without all the extra kit that comes with the Limited package weighs in at 2,020 kilos, which is a very even 4,444 lbs for those of you who struggle to compute metric equivalents in your head, which is a lot of weight to fling through curves.

That weight does allow for a reasonably good 1,585-kilogram tow rating, although I rarely see minivans being used for tugging along the camp trailer on summer holiday. There’s so much room inside I’m guessing that most campers must prefer to load up a big family tent, which can easily be done when all seven or eight seats are being used. The Sienna allows 1,107 litres of gear behind its third row, 2,466 if they’re folded flat, and a gargantuan 4,248 litres of stuff with the middle seats removed.

Overall fuel economy will suffer if you load it up often though, but unladen it’s good for a claimed 11.4 L/100km city and 7.9 in FWD or 12.4 and 8.6 in AWD trim. My FWD tester managed just above 11 in combined city/highway driving, which is very close to the official U.S. EPA rating of 11.2 combined. Fortunately Toyota’s V6 only requires regular gas, so another 10-percent savings can be had.

At the end of my test week I loved the 2014 Sienna XLE Limited for everything it did well, such as go quickly, ride comfortably, entertain brilliantly via its JBL audio and rear DVD systems, and haul five people plus cargo successfully. For all my DIY handyman needs a second-row seat that flips right under the floorboards would be more useful, although I’ve been told that most people rarely use their vans for hauling large loads of building materials, furniture and the like, so the Sienna will likely serve you and your family’s needs perfectly, while delivering limousine-like second-row comfort in a van that is arguably the best looking in the industry. You decide, of course, but it’s hard to go wrong with the 2014 Toyota Sienna.
©(Copyright Canadian Auto Press)
Car Shopping Tools