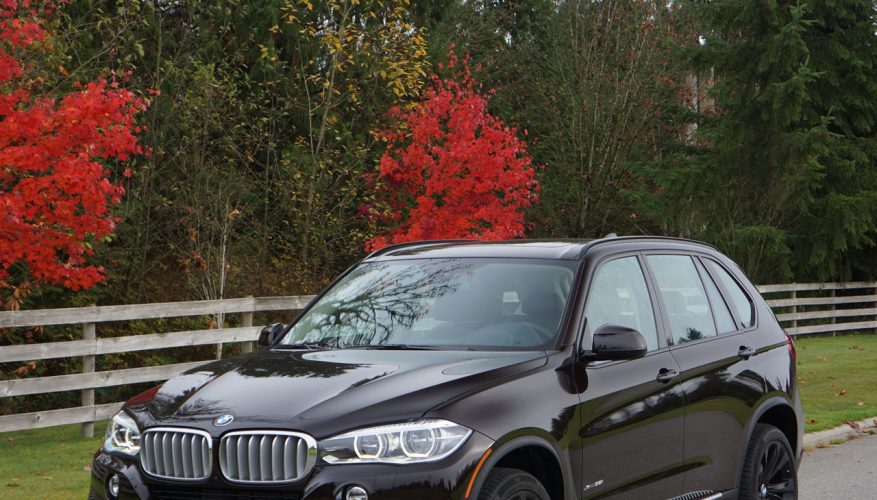 By: Trevor Hofmann
No one will mistake the 2014 BMW X5 for anything else, as the changes are purely evolutionary. The grille is a bigger and bolder version of BMW’s classic twin-kidney design, headlight treatment now inspired by the new 3 Series, and revised taillights larger iterations of other LED-enhanced lenses already available in the ever-expanding BMW lineup. Those who liked the outgoing X5 and BMW’s new design direction should really like what they see in the 2014 model. I happen to love it.

A car, or crossover sport utility in this case (or sport activity vehicle in BMW-speak), is always much more than the sum of its parts. It’s one thing to say the grille is bigger and bolder and contemplate how its 3 Series-inspired headlamps bookend those chrome-enhanced kidneys, or for that matter how its new chiseled LED tail lamps pull cues from its predecessor as well as various other more current BMW products, but take a walk around the vehicle from 10 metres away and it’s easy to see how harmoniously the new 2014 X5 comes together. The new model is easily the best X5 yet. The look is at once strong and purposeful, more masculine in every respect, yet it continues forward with a certain elegant athleticism. An ideal balance of grit and poise, power and endurance, like the finely sculpted shape of an Olympic diver mixed with the fluid movements of a master fencer. But I digress. This is a seven-passenger crossover SUV we’re talking about, after all.

To that end the X5 remains one of the best in the business, following through on its well-balanced styling with an ideal mix of comfort and sport on the road. The chassis soaks up even the harshest pavement irregularities let alone dirt and gravel, while maintaining its Germanic firmness that equates to brilliant at-the-limit handling. It’s almost as if it’s saying, “I dare you to throw me off-line!” It’s difficult to get the X5 unsettled. Ramp up speed and then throw it into a curve without contemplating the right velocity or apex and it just nonchalantly goes about its business. “Is that the worst you can do?” it taunts. Of course none of us try and drive badly, but most of us lose ourselves in thought once in a while and then brake too late before a corner or miss our turn entirely. The result of either is often panic braking during a turn, normally the worst thing we can do, which in some SUVs can end up in bruised egos, dented fenders or worse. The X5, however, maintains its cool under just about any circumstance, and that, my friends, is the most important reason to buy a vehicle that handles corners well. Sure it’s fun through the curves where Bimmer enthusiasts like to play, but the X5 is much more than that. It might just be the safest SUV on the planet because of its ability to avoid an accident in the first place, let alone survive one thanks to its full assortment of active and passive safety features.

Getting up to speed is no problem no matter which engine you choose. The X5 xDrive35i I tested came with the model’s least powerful base inline six, a turbocharged 3.0-litre unit that puts out 300-horsepower and 300 lb-ft of torque and is joined up to a highly efficient, quick-shifting eight-speed automatic transmission. BMW claims zero to 100km/h in 6.6 seconds, and I don’t doubt them. Takeoff felt V8-like although the engine’s higher pitched growl was more akin to one of the brand’s sports coupes, all in all an invigorating experience when throttle hits floorboard. If you want to reduce that sprint time opt for the X5 xDrive50i that manages the feat in 5.3 seconds. It incorporates a twin-turbocharged 4.4-litre V8 for an additional 45 horsepower over the engine it replaces, for a total of 445 horsepower and 480 lb-ft of torque. Being that I’d rather invest in big oil via the markets rather than simply make them rich by pouring it into my gas tank I’d opt for the most energy-efficient X5, the xDrive35d turbo-diesel. This year’s version is actually down 10 horsepower to 255, while torque remains 413 lb-ft. According to BMW, however, performance is as good or better than the outgoing model.

How did BMW manage less power yet more performance despite the new X5 actually being marginally larger than the one it replaces? Unless you rework the gearing for quicker takeoff, which often results in shorter gears at the top-end and poorer highway fuel economy, BMW chose to lighten up its new X5 with more aluminum and other exotic materials. That’s the kind of progress we enthusiasts appreciate, being that it not only improves a vehicle’s go-fast goodness, but also makes it more of a joy around corners, not to mention improving fuel economy.

Of course it’s a BMW so all of its efficient dynamics combine with a level of luxury few carmaker’s can match, impressive considering the 2014 X5 starts at only $62,900 plus destination. Highly refined soft-touch plastics join beautiful leathers, authentic woods and metals plus top-drawer electronics, the infotainment system’s graphics of such high resolution it almost looked like I could have dipped my fingers right inside when pressing its various features. BMW’s iDrive, which now includes a convenient touchpad atop the controller, worked flawlessly, and unlike the company’s first forays into electronic interfaces not much education was needed to get familiar with its various functions.

No, the X5 is one of those vehicles you can climb inside and immediately feel right at home, albeit a much nicer home than you’re probably used to. Its seats are ultimately comfortable yet supportive in all the right ways, driver ergonomics ideal for most body types, exquisite attention to detail capable of pleasing even the most fastidious of automotive elitists, the performance I’ve repeatedly mentioned ad nauseam fabulous whether or not you choose the optional dynamic adaptive suspension package (although I would as it’s active stabilization system and torque-vectoring rear differential work brilliantly; a self-leveling air suspension and sport-tuned dampers are available too), and all the while the X5 provides the type of work-a-day functionality expected of a crossover SUV, including an ultimately flexible 40/20/40 split-folding second row and optional seven-occupant seating.

All-round, the 2014 X5 not only has what it takes to maintain its popularity in the luxury crossover segment, it’s so good that only your curiosity will be served if you bother driving anything else.
©(Copyright Canadian Auto Press)
Car Shopping Tools