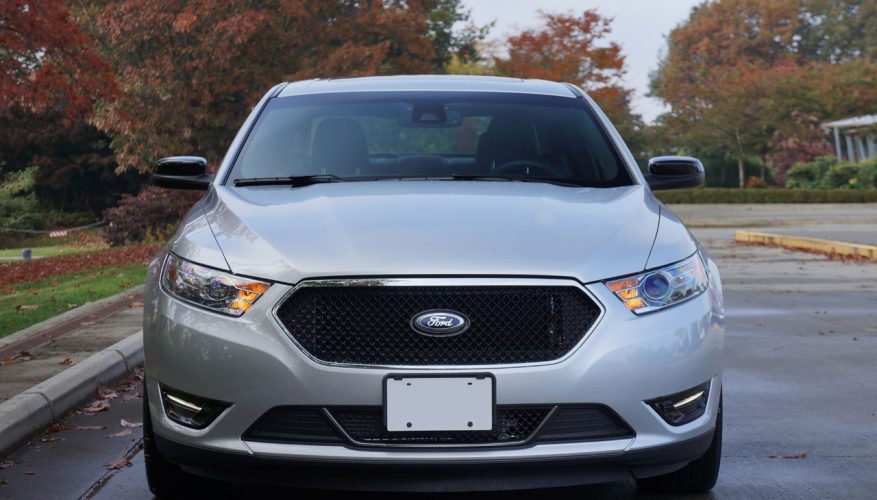 By: Trevor Hofmann
Chicago is a great town. No doubt many Canadian hockey fans disagree, only considering their hatred of the gritty, talented, oft-winning Blackhawks, but if you want a beautiful downtown filled with great architecture, including some of the tallest buildings in the U.S., fabulous food and some of the best live entertainment anywhere, there’s no better place to enjoy a night out. Chicago Assembly is also home to the Ford Taurus.

There was a time not too long ago that “Made in America” was something to avoid, at least when it came to cars. Not anymore. Ford’s quality, design, technology and performance are amongst the best in the industry. The Taurus is no exception. While you’ll likely see many more Fiestas, Focuses and Fusions on the road than Taurus sedans, it’s more a sign of today’s smaller car buying practices than any indication of this large four-door’s capability. The Taurus is a very good full-size sedan.

I’ve driven it in various trim levels with each drivetrain offered, last year’s tester boasting the new 240 horsepower turbocharged Ecoboost four-cylinder that actually makes more torque available sooner in the rev range than the standard 3.5-litre V6, the numbers reading 270 lb-ft at 3,000 rpm compared to 254 at 4,000 rpm, although the larger engine makes more power at 288. Of course, Ford created the Ecoboost four for fuel-efficiency first and foremost, the smaller engine claimed to use 9.2 L/100km in the city and 6.2 on the highway compared to the 3.5 V6 at 10.7 and 6.9. The V6 can be had with AWD, however, and in the case of my tester, with direct-injection and turbocharging for its own Ecoboost moniker along with three coveted letters tacked onto the front fender engine vent grilles and trunk lid: SHO.

That engine is special. Maybe not as special as the Yamaha co-developed and solely-produced V8 in the 1996 Taurus SHO, or even the 100-percent Yamaha-developed and -build V6 in the 1989 original, but merely because these early engines were only used for Super High Output Taurus models, not finding there way into any other FoMoCo vehicles, whereas today’s much more sophisticated and resultantly more powerful 3.5-litre Ecoboost V6 is offered in everything from this Taurus SHO to family crossovers and pickup trucks. That doesn’t make it any less special to drive, mind you.

It has gobs of power at takeoff that never seem to end, and there’s zero turbo lag while the split dual exhaust sounds sensational. For obvious reasons I didn’t spend a lot of time thinking about its fuel economy, although its 12.2 city and 7.8 highway rating is superb for a large, luxuriously appointed car that scoots down the road as quickly as the Taurus SHO; 5.8 seconds to 100 km/h despite its 1,969-kilo curb weight. The 3.5 Ecoboost makes 365 horsepower at 5,500 rpm and 350 lb-ft of torque at an incredibly tractable 1,500 to 5,000 rpm, while the power goes down to all wheels via a SelectShift six-speed automatic transmission with steering wheel-mounted paddle shifters. It’s a very smooth drivetrain if driven casually, yet reacts with punchy effectiveness when right foot meets floorboard. A Sport mode exacts the most performance out of the transmission, the console-mounted gear lever or steering wheel paddles necessary for shifting before redline, where the engine will automatically upshift if not prompted before.

Likewise the SHO feels very athletic in the corners, like a much smaller and lighter car than it really is. It’s shod with meaty 245/45YR20 V-rated all-season rubber on 20-inch machined aluminum rims with cool black painted pockets, a wheel and tire package that did its job, digging into the tarmac for grippy response to turn-in from the nicely weighted electric power assisted steering.

The steering setup was recalibrated as part of the optional $1,200 Performance Package that came on my tester, a combination of goodies that also adds upgraded front and rear calipers plus performance friction pads to an already impressive ABS-enhanced four-wheel disc setup, as well as a special track mode for the AdvanceTrac traction and stability control system which includes a “true off” feature, so you won’t burn out your brakes when flinging it around a racecourse. The above tires are actually part of this package too; the base SHO shoes running without the special performance summer tire combination given the YR designation. Likewise the SHO’s performance-tuned suspension gets further tuned with unique shocks and springs with this package, for that extra bite I spoke of earlier. It all joins the SHO’s already strong standard suspension components and other electronic aids such as Curve Control and Torque Vectoring Control for especially impressive at-the-limit handling. Lastly, the Performance Package wraps velvety smooth suede-like Alcantara around the steering wheel for a touch of Porsche GT3 flair added to this big sedan’s SHOwy personality.

It’s an upscale cabin, with loads of premium touches to make even seasoned luxury buyers feel right at home. That steering wheel is heated and gets toasty warm quickly, and like high-end European sport sedans each pillar is wrapped in the same attractive woven cloth as the roofliner for a nice finished look and good sound absorption. Textured metal trim offers a sporty appearance and feel, while top-tier Sony audio sounds fabulous and comes as part of one of the best infotainment systems in the industry.

MyFord Touch, with its brilliant full-colour high-resolution graphics on the centre stack and at each side of the speedometer, is one of my favourites to operate, with a user-friendly interface and more functionality than most competitive systems. Soft-touch plastic surfaces abound throughout the interior, although they’re a little rubbery feeling. Just the same, the padded dash continues way down to the lower sides of the centre console so that knees of larger folks won’t scuff uncomfortably. Back on the centre stack, a piano black lacquered panel looks rich, although it’s a dust magnet. Most of the controls are beautifully backlit, however, and touch-sensitive for a sophisticated high-end experience. The perforated leather seats are ultra comfortable with good lateral support, and they’re filled with holes for a reason, allowing air conditioning to blow through them and cool your derriere and backside on hot summer days. They’re heated too, of course, as are the rear seats, while additional SHO upgrades include a unique interior appearance package that includes aluminum brake and accelerator pedals, and an exclusive floor shifter. A power moonroof, powered rear window sunshade, rain sensing wipers, a rear spoiler, and of course special badging round out the SHO upgrades.

A long list of additional features comes standard on the SHO, including most of the items found on lesser SE, SEL and Limited trims. On that note all Taurus models are totally accommodating with comfortable seating for five, although rear vision isn’t great because of a narrow rear window and a very high trunk lid. That tall rear deck results in loads of cargo space, mind you, the trunk measuring a gargantuan 569 litres and featuring access for longer items via 60/40 split-folding rear seatbacks.

You can get into a base 2014 Taurus SE with the 3.5-litre V6 and front-wheel drive for as little as $28,999 plus $1,550 for freight and pre-delivery prep, although the SHO nudges up against $50k with an MSRP of $47,299 plus destination. Still, this is a car that can easily take on full-size premium models head-to-head when it comes to interior roominess, top-tier features and performance.