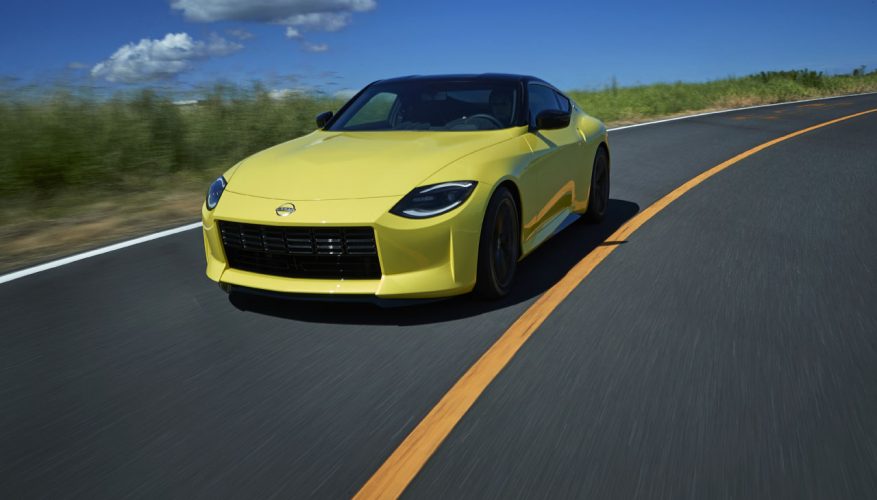 When an automaker creates a sports car as immediately classic as the now legendary 240Z, it’s often all downhill from there. It’s like the band that has a top-10 hit on their first album, and never achieves the same level of musical genius again. Could the next Z be the one that finally outdoes the original?

Sometimes we forget that Nissan (then Datsun in North America) had already experienced relative success with another great sports car before the 240Z arrived in 1969. In fact, the 1965–1970 1600 roadster (and predecessors), named Fairlady in Japan and raced in SRL 2000 form by actor Paul Newman at the very beginning of his motorsport career, was the 240Z’s (Fairlady Z’s) predecessor despite looking nothing like it. Where the 1600 roadster looked and performed similarly to British and Italian sports cars of the era such as the MGB, Triumph TR4/TR5, Alfa Romeo Duetto/Spider and Fiat Spider, the 240Z left every other entry-level competitor in the visual and literal dust, and became an instant hit because of it.

The Zs that followed gained displacement to overcome pollution equipment and therefore weren’t quite as appealing, while the 280ZX added luxury and weight, a scenario that continued to play out with the 300ZX, although the second-generation 300ZX was absolutely gorgeous and extremely powerful for the era, and is therefore considered by many as the best Z since the 240. This said the 350Z was lauded for styling and performance when it arrived, while the 370Z added more luxury and weight, and has kind of worn out its welcome after 12 years on the market. This brings us to the here and now, with hopes that the yellow beast before us all is a thinly disguised seventh-gen Z.

The Z Proto, as it’s called, appears more than just a concept. The name Proto is short for prototype after all, which outside of sports car racing circles means a near production ready concept designed to test the waters before a full introduction. Nissan has a history of near-production concepts, which bodes well for this car becoming the new 400Z, as netizen pundits are calling it.

Nissan has been teasing the next-gen Z for quite a while, first with a teaser video showing the car in silhouette a few months ago. This caused quite the stir, with many expecting a production-ready car to appear, but alas we only have a concept, albeit a nicely fleshed out one at that. The Z Proto looks like it could easily be a production model, from its graceful lines that pay greater respect to the original than any Z since the ‘70s, to its fully formed interior that continues forward with many of the key design elements that have always been part of Nissan’s much-loved super coupe.

From the front, the Z Proto immediately reminds of the early 240, 260 and 280 Z cars, particularly the blocky, rectangular grille that seems to pay tribute to a popular mod of the era which saw owners removing the thin chromed front bumper (this practice became even more popular amongst 280Z owners due to its larger safety regulated front bumper), but also shares similar sizing to the current 370Z’s frontal opening. Just the same, this has been the new Proto Z’s most criticized design element, with some thinking it’s just too big and square.

The Proto’s elegantly formed hood plays off early Zs too, but with a much wider domed centre section that begins farther rearward after a more pronounced crease down the middle. The ovoid headlights are entirely new, however, sharing some circular symmetry with the first Z, particularly the daytime running lights that are supposed to represent the circular reflection of the transparent headlamp fairings used on Japanese-domestic-market (JDM) models (and aftermarket upgraded North American cars). Their flush glass-covered sealed beam look is more in-line with the fourth-generation Z32, mind you, which incidentally housed the Z’s first Xenon HIDs as part of its 1998 makeover, but the new concept uses LED technology.

The Z Proto’s roofline, rear quarters and hatch, on the other hand, pull cues from a variety of eras, albeit mostly from the ‘70s due to moving most of its visual weight to the rear, which sees nicely upswept quarter windows as well as pillars with integrated “Z” logos, paying direct homage to first-generation models. This said, the rear lighting elements and back panel garner more influence from both the refreshed 1987-1989 Z31 and all Z32 300ZX models thanks to their large, horizontal taillight treatments, while the entire car is a major departure from both 350Z and 370Z models, necessary to provide a fresh approach to such an outdated model.

For those wanting a return to what arguably made the original 240Z a great car to drive, its superb power to weight ratio, the Z Proto’s five-inch longer body won’t be good news unless Nissan constructs it from lightweight metals and composites. Doing so, of course, would drive the price up substantially, which means we’re only likely to see the same types of high-strength steels and alloys used in the platform-sharing Infiniti Q60’s body structure, with any exotic materials allocated to the much pricier GT-R.

The new Z Proto measures 4,381 mm (172.5 in) long, 1,849 mm (72.8 in) wide, incidentally, which is exactly the same width as the Q60, plus it’s 1,310 mm (51.6 in) tall. We can expect a production version to use at least as much aluminum for its body panels as the current 370Z, which gets a lightweight hood, door skins and hatch. Aluminum suspension components will make the grade too, the current Z already using an aluminum-alloy front subframe, engine cradle, and forged aluminum control arms (upper and lower in the rear), steering knuckle, radius rod, and wheel carrier assembly.

Within that just-noted engine cradle will be Nissan’s impressive twin-turbo 3.0-litre VR30DDTT engine, an advanced power unit that delivers superb performance and much better fuel economy than the 3.7-litre V6 currently in use. It comes in two states of tune in the Q60, including 300 and 400 horsepower variants, with most pundits expecting a 400Z nameplate to accompany the most potent version. This said it would be an unusual move to limit the upcoming Z to just the top-line engine, as a 300Z’s lower price point would allow for many more sales, while a potential 300ZX could denote available all-wheel drive, currently standard in Canada in the Q60, while provide an ideal marketing connection to the aforementioned historical Z models. A six-speed manual is shown in the concept, nothing new here, while it’s possible the new Z will debut more forward gears for the automatic, which currently houses seven.

As has mostly been the case through the decades, the new Z Proto’s interior is heavily influenced by first-gen Z cars, albeit with modern-day refinement and technology that far surpass today’s model. A key giveaway includes the sport steering wheel with its classic circular centre pad endowed with a “Z” logo instead of Nissan’s usual crest, but fans will appreciate the trio of driver-canted ancillary gauges atop the centre dash even more. Along with the usual oil pressure and voltmeter dials, the Z Proto replaces the current model’s digital clock with a boost gauge, a nod to the twin-turbo V6 housed just ahead.

The digital gauge cluster and large high-definition infotainment touchscreen are the most notable improvements over all predecessors, the former necessary for respect in this segment, and allowing for much more driver usability due to the ability to incorporate sophisticated performance readouts, while the latter should come equipped with all the usual modern amenities including Android Auto and Apple CarPlay smartphone integration, a big, clear backup camera with the possible option of a 360-degree overhead bird’s-eye view, and more.

The three rotating dials used for the heating and ventilation system strangely don’t appear to provide dual-zone capability, but it is automatic so this version is at least up to par with the current car.

Speaking of the current car, the Z Proto’s side-window defog vents on the outside corners of the dash, and its uniquely shaped door handles with integrated air vents, appear directly pulled from today’s Z, a strange choice if the brand wants to wholly differentiate the upcoming model from the one it replaces.

The seats look fabulous, but such can be said for the current model’s top-tier Recaros too, all of which help to make the new Z Proto appear like a production model in waiting. Then again Nissan is calling it a “development study vehicle,” so we shouldn’t get our hopes up too high, even though the 2001 Z Concept ended up looking a lot like the 2003 350Z. Reports claim the production vehicle has been signed off and development is well under way, but so far we haven’t been given a launch timeline. Considering today’s Z is now the oldest generation of any model sold in Canada, they may want to get a move on.

On that note, the 2020 Nissan 370Z is available with up to $1,000 in additional incentives. Find out about this and other info at CarCostCanada, where you can learn about manufacturer rebates, leasing and financing deals, and dealer invoice pricing that could save you thousands. See how the CarCostCanada system works, and remember to download the free CarCostCanada app from the Apple Store or Google Play Store.

Also, make sure to check out our full photo gallery above and the three available Z Proto videos below: