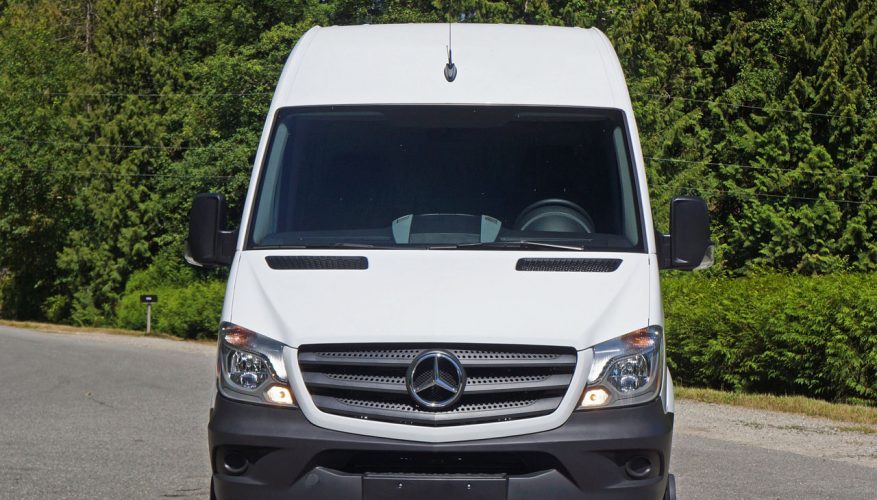 By: Trevor Hofmann
We can thank Mercedes’ Sprinter for the new wave of commercial vans available to businesses and RV owners, opening up a wide world of competitive options we’ve never enjoyed before.

Previously the North American markets only had Ford’s classic E-Series, GM’s Chevrolet Express and GMC Savana twins, and the Dodge Ram Van series, but when that final model was so far beyond its stale date that few fleet operators were willing to ante up any longer it forced then DaimlerChrysler to literally think outside the box, and both Dodge and Freightliner versions of the Sprinter were formed from Mercedes’ well proven first-generation model. This much more spacious and extremely fuel efficient alternative did so well that Ford had to step up with an alternative to its E-Series, first complementing its short-wheelbase E-150 with the European-designed and built Transit Connect, and then adding size on top of its E trims with the considerably bigger and more directly competitive full-size Transit that now leads the segment in sales, just like the E did before. This was followed up by Nissan’s full-size NV 1500, 2500 and 3500 models and then the Transit Connect-battling NV200, also badged City Express by Chevy, after which the newly formed Fiat Chrysler Automobiles’ rebranded its Euro-sourced Fiat Doblò and Ducato commercial vans with Ram ProMaster City (compact) and ProMaster (full-size) models respectively. Since then Mercedes has brought its smaller Metris to market to allow yet more choice in the burgeoning light commercial sector. Again, kudos to Mercedes’ Sprinter for motivating the others to offer these excellent options, but this in mind, is it the best choice in the large van segment?

Mercedes doesn’t update its full-size van very often, but nevertheless the Sprinter remains fairly fresh looking since receiving a mid-cycle makeover in 2013 for the 2014 model year, some seven years after the current second-generation debuted in 2006. The facelift added a deeper more attractive grille, modified headlamps, a reworked bumper and lower fascia, plus updated body panels, revised taillights and new trim front to back, while even more importantly an entirely new two-stage turbocharged 2.1-litre BlueTec four-cylinder diesel was added as the entry-level option below the 3.0-litre turbo-diesel V6 that was carried over from the previous generation, the smaller engine providing much improved fuel economy.

On top of all these improvements Mercedes followed up the following year with a new class-exclusive push-button, driver-selectable 4×4 drivetrain for V6-powered models, featuring a 35:65 torque-split between the front and rear axles and serious off-road credentials enhanced by a 75-mm (2.9-inch) increase in ride-height up front and 100 mm (3.9 inches) in the rear, while Crosswind Assist became standard with 2500 models and other small updates were added across the line. After all the changes leading up to it, this 2016 model year is pretty much steady as she goes.

I’m not going to focus on the 4×4 vans or for that matter the Passenger or Cab Chassis body styles with this review, but rather the Cargo Van 3500 High Roof 144WB (144-inch wheelbase) I drove. At $46,900 plus freight and fees it starts out $2,400 higher than the lighter duty $44,500 2500 model with the same wheelbase and tall body, and $5,000 more than the identically long albeit considerably shorter 2500 Standard Roof van. There’s a 170-inch wheelbase version available with either the High Roof or Super High Roof that ranges from $47,400 to $55,450 (the priciest EXT has an extended rear cargo area as well), so any worries that Mercedes doesn’t have your needs covered should be put to rest.

Despite being a work truck Mercedes finishes off the interior quite nicely. It makes sense, because many components appear to be plucked from the lower end of its car line. Notable details include high quality power window controls, the optional multifunction switchgear on its metallic trimmed steering wheel, the nice chrome detailing around the instrument cluster dials, a stitched leatherette shifter boot, nice quality colour infotainment and HVAC interfaces, the latter utilizing very similar rotating temperature dials to its car line, and the list goes on.

Oddly this model has a rearview mirror that stares into nothingness, so the driver who eventually gets this van may want to hang a scenic painting on the wall divider for some comic relief when traffic challenges get out of hand. Fortunately the side mirrors are plenty large and feature convex secondary mirrors for greater visibility down each side, while the view out the front and side windows is superb thanks to the Sprinter’s expansive glass and tall ride height.

That full partition is a $320 option by the way, while the aforementioned multifunction steering wheel came as part of a $670 Convenience package that also included and a classic looking orange pixel-matrix display between the gauge cluster dials, a trip computer, cruise control, a 12-volt power outlet in the driver’s seat base, a hinged lid for the centre console storage compartment, and two additional master keys. The infotainment display is standard, incidentally, but the rearview camera within was $740, the cab also getting $195 floor mats, while behind that divider a $740 Extended Cargo package added sidewall lashing rails on the waist rail, upper cargo lashing rails, a load securing rail system, tensioning straps, and lashing rail straps.

My tester came in ultimately base Arctic White paint, but astonishingly you can choose from 23 different colours if white’s not your thing, many at no charge and others from $640 to $1,160 extra, while you can also get durable black leatherette upholstery for just $100.

Yes, some of those features are downright luxurious, while Mercedes seemed to pull the Sprinter’s suspension from its lineup of premium cars as well. It’s surprisingly compliant for a heavy-duty commercial van, this not only important for anyone aboard but also helpful to keep cargo in place when traveling over rough pavement. It didn’t hurt that the base seats were so comfortable, especially for the lower back, and while DIY manual controls were needed to find my ideal position they were easy to use and provided plenty of options.

Even more surprising than the Sprinter’s comfort quotient was the reaction to throttle input and overall power delivery of its little four-cylinder turbo-diesel. It’s a smooth, quiet engine even at takeoff, while it really gets a move on when asked to perform. Again it remains quite hushed when pushed, the little engine feeling more like a big V6 than a 2.0-litre four, but of course I drove it empty and would no doubt feel more taxed if filled up to its considerable as-tested 1,980-kilo (4,367-lb) maximum payload (the Sprinter’s payload range spans 1,563 to 2,498 kg/3,446 to 5,507 lbs). Likewise if asked to tow a 3,402-kg (7,500-lb) trailer, but while it might not take off as quickly it can do it, which says a lot, while its max GVWR is a sizeable 520 tonnes (11,030 lbs).

All of this is impressive, but the reason you may want to consider the Sprinter above all others comes down to dollars and cents. First off it’s competitively priced, Mercedes charging no premium for its three-pointed star, while at least as importantly the Sprinter has taken home the Canadian Black Book Best Retained Value award for six years straight since 2010. Add to this an attractive powertrain warranty of 60 months or 160,000 km and it starts looking difficult to pass up, while making it even more tempting are large discounts for buying a 2016 model this late in the model year.

Whether you’re looking for a single addition to your one vehicle fleet or managing a large convoy, the Sprinter is a smart choice. It delivers good premium-level looks (let’s not forget this rolling billboard might be your first opportunity to make a good impression with future customers, and some of its competitors are ungainly at best), is easy to drive, powerful, fuel efficient, very capable for hauling and towing, well stocked with standard and optional features, and best in class for retained value, that last point being all you probably need to know.
©(Copyright Canadian Auto Press)
Car Shopping Tools