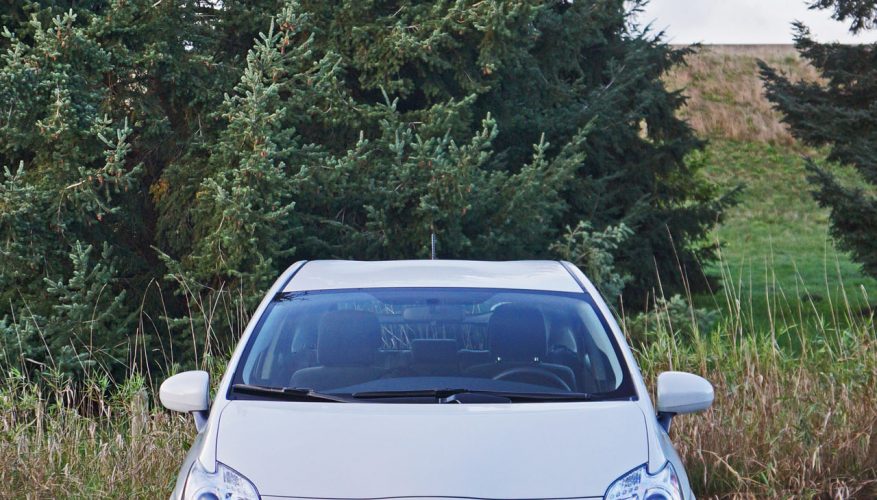 By: Trevor Hofmann
Talk about a design that’s stood the test of time, Toyota’s Prius has been a benchmark of longevity. Since the first-generation Prius sedan was redesigned as a hatchback for 2003, its basic shape has remained the same. Toyota gave it a major overhaul for the 2010 model year, with a new grille, new scalloped headlamps, new rear quarter windows and changes made to the taillights and rear bumper, which were all well received, but other than some very subtle styling revisions the design has continued forward right up to this current model. Even so, this 2015 Toyota Prius looks remarkably fresh and modern, its deep lower grille, “floating” style lip spoiler and vertical LED fog lamps appearing downright edgy, while the clear elements in its taillight lenses add a custom touch.

You can get the Prius with nice big 17-inch aluminum wheels, but my tester was completely base and therefore came with a set of 15-inch steel rims that did a pretty good job of imitating alloys. The black gloss painted steel wheels in behind are a five-spoke design just like the silver covers overtop, a much better idea than fitting five-spoke wheel covers to regular steel wheels. They look a bit small for a car that borders on mid-size, but all in all fulfill their mission as a better than average looking set of base rims. Toyota wraps these in 195/65R15 Bridgestone Ecopia EP20s, which utilize an all-season low rolling resistance tread compound integrating L.L. Carbon to resist cracking and chipping as well as O-bead construction to enhance ride comfort and improve uniformity, resulting in good expected tire life, great usability in most weather conditions, better fuel economy than other types of tires, and good customer reviews overall. I certainly didn’t find these tires held the Prius back during cornering, but rather the car kept its line very well even when pushed hard and was a joy at higher speeds.

A Prius that was a joy to drive? As you’ve probably heard, Toyota’s iconic hybrid was never meant to be a performance car, but over the years it’s been given unfair criticism for being overly boring to drive. It’s set up for comfort before speed, which is a given for most cars that sell into a segment of the market that’s more about delivering solid, dependable and affordable transportation than winning the hearts of performance enthusiasts, but to call the Prius boring is not only going to far, it totally misses the point.

The fact is that any Prius, even with base wheels and tires as tested here, takes to winding roadways confidently, tracks well on the highway and, as you’ve likely already been told, is easy to drive in busy inner-city traffic. It rolls a bit through higher speed corners and dives somewhat upon hard braking, but this could also be said of most compact to midsize competitors, and these issues don’t at all hamper its ability to get from point A to point B quickly and effectively, not to mention comfortably.

Take a seat in any Prius and you’ll be surprised at how large and accommodating its cabin is. Hip and shoulder room is excellent front to back, while leg and headroom is expansive to say the least, the rear quarters feeling more like that of a big luxury sedan than anything in the compact class. Despite rolling on the same New MC platform architecture as the Corolla, the Prius is actually EPA rated as a midsize car, something taxi companies have appreciated for more than a decade. Along with size the Prius is wonderfully comfortable, its front seats totally supportive in all the right places, and rear bench amply comfortable for three abreast, while its cargo capacity allows for 612 litres of what-have-you behind the rear seats and up to 1,121 litres when those 60/40-split seatbacks are folded flat.

Without any gauges ahead of the steering wheel, and a very efficient, uncomplicated set of touch tracer (and regular) buttons on its spokes (along with the usual audio and phone buttons plus the cruise control stalk just behind, it gets buttons for the multi-function display system/trip computer as well as the very unusual yet welcome addition of a temperature control toggle), the Prius could almost look low-tech, that is until you glance over to the right. An open, airy cabin puts a bright blue digital primary gauge package up on top of the dash, placed in the centre, which while a bit unorthodox is something that quickly becomes second nature.

A floating centre stack (with storage underneath) slopes rearward at a similar albeit opposite angle to the car’s wedge-shaped front end, and is thoroughly covered with flush buttons to operate the standard 6.1-inch full-colour display audio interface and the easy-to-use automatic HVAC system. The former sounds good thanks to six quality speakers, and features AM/FM/CD/MP3/WMA compatibility as well as the convenience of an aux jack and USB input for external devices, while Toyota’s standard Bluetooth hands-free phone system is ultra easy to set up and has never once caused me a problem. It features an automatic phonebook download as well as audio streaming too.

My favourite Prius design element is the electric blue digital-patterned gearshift knob at the lowest extremity of the centre stack, something I hope Toyota keeps in the 2016 model redesign that’s expected later this year. A large “P” button just to the left of the shift lever puts the transmission into park; so don’t go mistaking it for an electronic parking brake, as you won’t be getting very far without disengaging the foot-operated pedal. On that note I once again must ask Toyota why the Prius beeps on the inside when reversing? It should do that on the outside to warn pedestrians, but at least an effective backup camera is standard.

On that note Toyota makes sure that even entry-level Prius buyers don’t drive home empty handed when it comes to features. Remote access to the car is granted by a standard proximity-sensing Smart Key system, whereas a pushbutton ignition takes care of starting up and shutting off the engine. Some other standard items not already mentioned include tilt and telescopic steering, power windows with auto up/down all-round, powered and heated side mirrors, variable intermittent wipers, an intermittent rear wiper, a height-adjustable driver’s seat, nice quality fabric upholstery, scuff plates on the doorsills, carpeted and all-season floor mats, an overhead console with a sunglasses holder, a cargo cover and loads of standard safety equipment including ABS-enhanced brakes with brake assist and electronic brake force distribution, traction and stability control, Toyota’s Smart Stop Technology (SST) that cuts power to the engine during emergency braking, direct tire pressure monitoring, active front headrests with whiplash protection, front seatbelt pre-tensioners and force limiters, plus seven airbags including one for the driver’s knees.

If the features on my base Prius tester aren’t enough for your wants and needs, you can upgrade to one of three trim packages that start with a $3,245 Moonroof Upgrade Package, and are followed up with a $4,985 Touring Package and $8,085 Technology Package, all added to the 2015 Prius base price of $26,205 plus $1,620 for freight and pre-delivery prep. Unlike some cars upgrade process that sees each subsequent package add yet more features to the preceding package’s list of gear in a systematic organized fashion, Prius package upgrades are a bit more random. For instance, the Touring package boasts a sporty set of 17-inch alloy rims on 215/45 tires that get removed when you upgrade to the top-line Technology Package. The move from base to the second-rung Moonroof Upgrade Package doesn’t delete any equipment, however, instead adding the expected powered tilt and slide glass sunroof as well as ultimately green integrated solar panels, while navigation with voice recognition, an enhanced audio system with SMS to speech and email to speech functions, satellite radio, an integrated garage door opener, and a touch sensitive lock/unlock “button” on the front passenger door handle get added as well.

The Touring Package includes all of the features in the Moonroof Upgrade Package minus the moonroof, plus auto-leveling LED headlamps with washers, fog lamps, an eight-way powered driver’s seat, heated front cushions, and more environmentally friendly synthetic leather upholstery.

Lastly, the Technology Package adds back the moonroof plus most of the items from the Moonroof Upgrade Package, as well as some of the Touring Package features such as the heated synthetic leather seats, and then gives you a simulated leather-wrapped steering wheel, dynamic radar cruise control, AVN premium navigation, an eight-speaker JBL audio system, Toyota’s pre-collision system, and a rear bumper protector. Out of all these options the only upgrade my tester included was a $255 coat of Blizzard Pearl paint, a particularly good-looking addition just the same.

The Prius’ most impressive feature is standard mind you, its Hybrid Synergy Drive powertrain. This is hands-down the best-proven HEV drivetrain on today’s market, enhanced over the years to include a DOHC, 16-valve, Atkinson-cycle 1.8-litre four-cylinder internal combustion engine (ICE) featuring variable valve timing with intelligence (VVT-i) that gets joined up to a high-torque electric motor and high-capacity nickel-metal hydride battery for total output of 134 net system horsepower. That might not sound like a lot by today’s standards, but factor in that its continuously variable transmission (CVT) delivers that power in an absolutely seamless, progressive manner and that much of the powertrain’s energy is derived from electric sources resulting in full torque coming on instantly, and it’s easy to appreciate that the Prius will delivery truly energetic launches from standstill, especially if you press the “PWR Mode” button before you take off. Then again don’t do that all the time or you won’t get the best possible fuel economy. EV mode is where ultimate efficiency occurs, although the Prius will only allow 100-percent electric motive power if the battery is sufficiently charged and even then it won’t allow you to drive over 18 km/h before switching back into dual ICE/electric hybridized Eco mode, so it’s really only useful when driving through parking lots or in really heavy bumper-to-bumper traffic. It should be noted that the new Camry Hybrid maintains speeds nearing 40 km/h in EV mode, so EV improvements with the next-gen Prius are expected.

Efficient use of the Prius drivetrain results in extremely good fuel economy as you’ve likely already learned or experienced personally, the new five-cycle Natural Resources Canada claimed rating being 4.6 L/100km in the city, 4.9 on the highway and 4.7 combined, making the Prius one of the stingiest vehicles available today.

This is one of the key reasons people buy a Prius, plus the good feeling and well deserved respect attained from driving a vehicle that emits much less air pollution than average, not to mention uses more recycled goods in its production and at the end of its life can be recycled more thoroughly than most rivals.

That’s the Prius. An inexpensive car to buy, an even cheaper car to own thanks to fabulous fuel-efficiency plus outrageously impressive ongoing reliability and long-term durability, loaded with standard features and capable of being optioned out to the hilt, amazingly accommodating for five people and their gear, enjoyable to drive, all presented in a five-door hatchback shape that most consider a rolling icon of the environmental movement. Buy a Prius and you’re immediately a more significant part of that movement, and as importantly you’ll have purchased an excellent car that will most likely give you years of loyal service for the monthly running costs of a bus pass.
©(Copyright Canadian Auto Press)
Car Shopping Tools