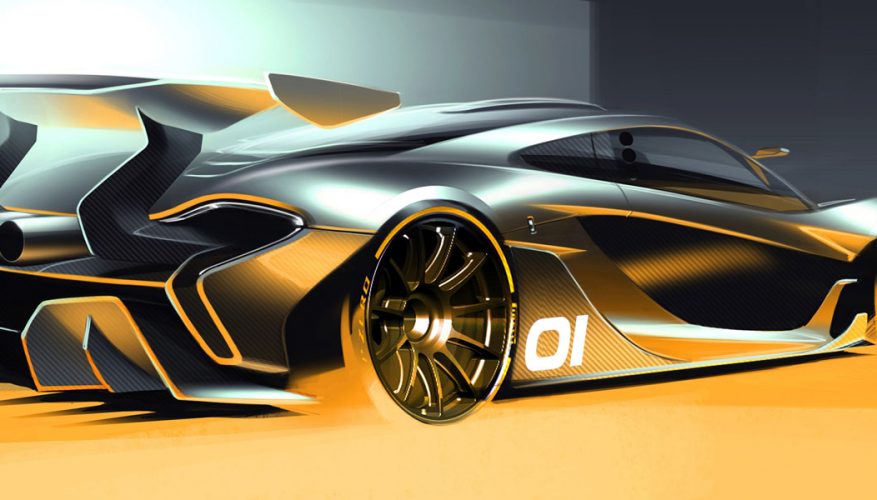 By: Trevor Hofmann
The McLaren P1 GTR makes absolutely perfect sense. After all, why wouldn’t a supercar brand that’s spent the vast majority of its 50-plus years producing racing cars want to turn its pride and joy road car into a track-dominating force to be reckoned with (especially considering that its current MP4-29 Formula 1 car isn’t exactly making headlines for the right reasons).

By the looks of a teaser image the Woking, Surrey, England-based manufacturer released yesterday, there’s very little that a production version of the P1 GTR Design Concept couldn’t do. This “ultimate track-focused” version of the P1 gets a not so subtle aerodynamic treatment that includes an angularly protruding rear diffuser only dwarfed in size by the mighty rear wing that stands much taller than the low-slung super coupe’s roofline. We can’t see the front-end design from the single-angle image McLaren provides, but we can imagine similar styling upgrades making for an intimidating presence. The body shell is completed with exposed carbon-fibre surfacing ahead of the car’s pièce de résistance set of twin canon tailpipes mounted up high in the fuselage in the same fashion as a superbike.

Like the MP4-29 and every other F1 car taking part in the 2014 Formula One World Championship season, the P1 GTR Design Concept is expected to be hybrid-powered, although McLaren isn’t saying anything about the new prototype’s powertrain just yet.

What they are saying is that the P1 GTR is going into production starting June 2015, just after the 375th and final example of the P1 road car is completed; which just happens to be two decades since the aforementioned McLaren F1 GTR won the 24 Hours of Le Mans.

Those hoping for a return to Le Mans might have to keep their dreams in check for the time being, however, as there’s no announcement of McLaren participation in the legendary event just yet. Instead, the P1 GTR is slated for a customer racing program “to include driving events, training and vehicle support,” with participants having “unprecedented access to the technologies, resources and expertise which have helped develop and train Formula 1 champions,” says McLaren. The British brand’s racing division likely isn’t looking for any future Jenson Buttons or Kevin Magnussens from the P1 GTR program, but rather furthering its road car ownership experience in similar fashion to how Ferrari and Porsche have done over the decades.

The P1 GTR Design Concept will debut at the 2014 Pebble Beach Concours d’Elegance in Monterey, California during an exclusive preview event held within the confines of the McLaren Brand Centre on the 18th Fairway at the Pebble Beach Lodge on Friday, August 15 at 02.00 BST (3:00 PM PST/6:00 PM EST), at which point we’ll all know a lot more about what’s under this dramatically styled car’s carbon-fibre skin.
©(Copyright Canadian Auto Press)
Car Shopping Tools