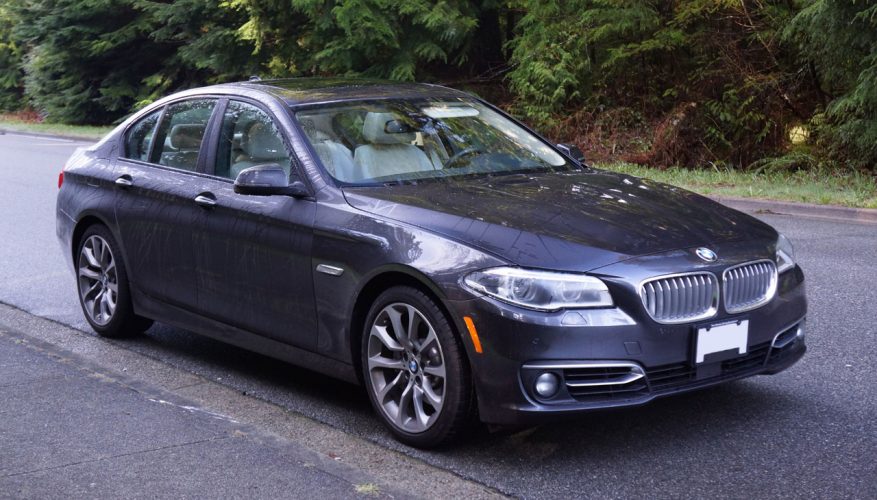 By: Trevor Hofmann
I’ve owned six BMWs in my lifetime including two 5 Series, but none that comes anything close to this new 2014 535d xDrive. My first was a 1982 528e with a five-speed manual that I bought from a repo lot for much less than it was worth, but all I could afford. To be clear it wasn’t my first BMW, that being a ’74 Bavaria 3.0S, which could be considered the predecessor to the 5 and 7 Series combined, but the 528e was probably the best car I’ve ever owned. After replacing the alloys with a set of 1984 “mags” and re-and-reing interior parts (including the Blaupunkt stereo complete with the updated rear shelf and Blaupunkt speakers) from that same 1984 wreck, I sold it to a friend at 418,000 km and heard it ran well over 500,000 km before a runaway parked car T-boned it and its life ended, a sad demise to a very faithful car. The 120 horsepower Eta engine was never fast, but it was torquey which made it feel quick off the line, and it was a dream on the highway and nirvana on a curving road. My second 5 Series was a 1990 525i that I purchased as a lease return. It was a prettier car than the 528e, faster and a touch better handling, and ran trouble-free during its tenure with me. In my opinion this era of 5 Series was the best looking in BMW’s long lineage of 5s; that is until this newest sixth-generation F10 model came upon us in 2010.

The current Jacek Fröhlich-designed 5 Series replaced Davide Arcangeli’s rather awkward E60 model (complete with its Dame Edna-inspired horn-rimmed headlights) that only looked good beside the even clumsier Adrian van Hooydonk-penned E65 7 Series. This latest 5, which is incidentally based on the very attractive current F01 7 Series, is arguably the best looking of its ilk ever, and could also be considered the most attractive car in its class. I’m sure Audi faithful will rebuke me for ignoring their beloved A6, and while that’s a beautiful piece of rolling artwork it looks much like the A3, A4 and A8, whereas the 5 sits uniquely within the BMW lineup, sporting its own twin kidney grille that doesn’t meld into the headlights like the new 3, 4 and X5 (although there’s certainly nothing wrong with that), a gracefully long, sleek profile, and a gorgeous set of traditionally styled BMW taillights. From front to back my Dark Graphite Metallic painted 2014 535d xDrive tester was a sight to behold, making me wish I had a new 5 Series in my driveway, permanently.

If I did it would include this car’s fabulous 3.0-litre turbocharged diesel, a high-tech engine with common-rail direct injection, multi-stage turbocharging and variable turbine geometry resulting in impressive off-the-line performance and ultra-pleasing efficiency. The 535d puts out 255 horsepower from 4,000 rpm, which is relatively low compared to most gasoline engines in its E-segment, although torque is a V8-like 413 lb-ft starting at 1,500 rpm. Ok, I should be careful saying V8-like when talking to Bimmer fans, being that the current 550i makes 479 lb-ft of twist available in full force from only 2,000 rpm, resulting in zero to 100 km/h in only 4.5 seconds, but believe me, the 535d feels plenty quick off the line even though its official sprint is 5.7 seconds, much thanks to standard xDrive all-wheel grip and its wonderfully quick-shifting eight-speed automatic with paddle-shifters.

What the 550i can’t do is match the 535d’s economy, rated at 7.9 L/100km city, 5.3 highway and 6.7 combined compared to the faster car’s 12.8 city, 8.1 highway and 10.7 combined. These numbers are miles apart, and while we all know that the results of Transport Canada’s EnerGuide rating system could have just as well been conjured up by Madam Aubrey’s tarot cards, they serve as good comparison numbers, with more accurate real-world estimates found south of the 49th via the U.S. EPA system that rates the 535d xDrive at a metric-converted 9.0 L/100km city, 6.3 highway and 7.8 combined compared to 14.7 city, 9.8 highway and 12.4 combined for the 550i xDrive. No matter how you look at it, the 535d delivers a lot of performance per litre of fuel, and at today’s pump prices it’s the most efficient bet in the 5 Series family.

On the road the new 535d is as enjoyable to pilot as any 5 before it, except those adorned with BMW’s revered M badge. My tester was shod with this model’s standard-sized 19-inch alloy rims on 245/40R19 rubber, the former created in a beautiful 10-spoke pattern BMW dubs Turbine style that’s at once elegant and sporty, while their large diameter and low profile tires made the most of the car’s ideally set up aluminum intensive front dual ball joint short-long arm suspension and rear multi-link setup. The new 5 incorporates electrically assisted steering, but thanks to updates to this 2014 model you’ll be hard pressed to tell the difference between it and a hydraulic system. Steering is responsive and direct with good feedback. Like with any 5, the way it moves through curves has much to do with its overall balance, this car perfectly weighted at each end, 50:50. Starting with the right layout and mechanicals, BMW adds some electronic aids such as Driving Experience Control that allows you to switch between its default Comfort mode to Eco Pro, or more to most Bimmerphile’s liking, Sport mode that delivers edgier engine and suspension settings. Before we discount Eco Pro, mind you, it’s cool in its own way.

Eco Pro is the one I chose for everyday driving, being that forward movement in the city is more often than not hampered by annoying appliances jamming up highways and byways, thus making quick progress impossible, so why not set the 5 to its most economical drive program and save a little fuel while doing less to pollute? Eco Pro recalibrates accelerator and transmission parameters to make the most of each diesel droplet while maximizing the automatic HVAC’s efficiency, and even goes so far to tell you how much distance you’ve gained by being so thoughtfully green minded. These functions are combined with BMW’s automated start-stop system, which shuts the engine off when it would otherwise be idling at traffic lights or while waiting for a passenger. Additionally, there’s a “coasting” feature that (as the name implies) lets the car glide along without the aid of the engine when there’s no need for power (i.e. on a downhill grade) at speeds of up to 160 km/h, while kinetic brake energy regeneration adds to the 5’s efficiency yet further. Even BMW’s navigation system will help you find the most efficient route to your destination, by using a program called Eco Pro Route. There are additional eco-friendly EfficientDynamics features that help the 535d come close to achieving similar fuel economy to the brand’s gasoline-powered ActiveHybrid5, but suffice to say that any 5 Series is one very impressive example of new-edge engineering.

That the 535d xDrive performs so efficiently and so well when called upon, yet with such a refined demeanor is its trump card. What a beautiful interior. The 5 is my style. It’s a step up from the 3 in design and execution, with little details taken care of such as the lower panels on the centre console being surfaced in leather instead of the 3’s less appealing hard plastic. My Modern trimmed tester’s cabin came in an elegant Veneto Beige hue with high-gloss Fineline Light Wood trim and aluminum accents. I really like the way the widescreen infotainment display is neatly melded right into the dash design rather than the 3’s flat-screen approach, sitting atop the centre stack, and it’s so much nicer than the old 5’s double-bubble design. Everything on the centre stack has its appropriate place and resides within it, starting with that infotainment screen, and just below that a row of vents, then the audio switchgear, and below that the well laid out automatic HVAC interface. I also appreciate the way the centre stack is once again angled toward the driver, a BMW tradition that’s in place because it makes a lot of sense. What’s more, the iDrive infotainment system remains one of the most comprehensively functional infotainment systems on the market, yet now it’s also one of the easiest to use. Phone pairing was ideally uneventful, while setting up radio station favourites as well as nav routes are intuitively designed processes that won’t leave you yelling expletives at the touchscreen like the old one did.

While considered the sport sedan of sport sedans by those in the know, the 5 Series has always been a comfortable luxury car too. The new model is no exception, with some of the best seats in the business along with all of the amenities expected amongst cars in this class. The usual features aside, notable standard items include proximity sensing remote access with pushbutton ignition, driver’s side memory, heated front seats and a heated steering wheel, auto-dimming interior and exterior mirrors, navigation, dynamic cruise control, active high-beam, front and rear park distance control, a powered tilt and slide glass sunroof, adaptive bi-xenon HID headlights, and LED fog lights.

If that’s not enough, standalone options include $1,500 18-way comfort seats, $600 massaging front seats, $750 ventilated front seats, the $3,500 adaptive drive system with active dampers and active anti-roll bars, $2,500 Driving Assistant Plus, a $3,000 rear entertainment system, and my personal favourite, $350 for speed limit info that could easily save you that much the first time it causes you to slow down.

Still not enough? BMW offers a number of 5 Series packages that can help personalize your experience, such as BMW ConnectedDrive Services for $850 that includes real-time traffic info, BMW online and apps, concierge services, convenience telephony and extended smartphone services, internet, and remote services; a $1,600 Enhanced Interior package that adds a leather dashboard, an anthracite Alcantara roofliner, and individual reading lights; a $3,600 M Sport package that includes all the usual M upgrades (albeit not the M5 performance upgrades); a $4,200 Premium package that ups the ante with a Harman/Kardon audio upgrade (a Bang and Olufsen system can be added for an extra $4,900), a powered trunk lid, powered rear sunshade, heated rear seats, a rearview camera with surround view monitor, side sunshades, and satellite radio; and last but hardly least a $4,500 Technology package that adds active blind spot detection, lane departure warning, head-up display, active protection and active LED headlights.

My tester was comparatively plain as it didn’t include many options, but it hardly left me wanting. I was as comfortable as I’ve ever been in a 5 Series sedan, while rear seat roominess is now much better than in years past. Likewise, trunk volume is massive at 521 litres, while a standard pass-through allows longer items like skis to fit through the seatbacks just above the centre armrest.

So how much does all this 2014 BMW 535d xDrive goodness cost? You can get started for $68,150 plus $2,095 for freight and pre-delivery prep, and while that’s hardly chump change it’s nevertheless very good value for an efficient yet powerful sport-luxury sedan that’s so well executed. All I can say is try it, you’ll like it.
©(Copyright Canadian Auto Press)
Car Shopping Tools