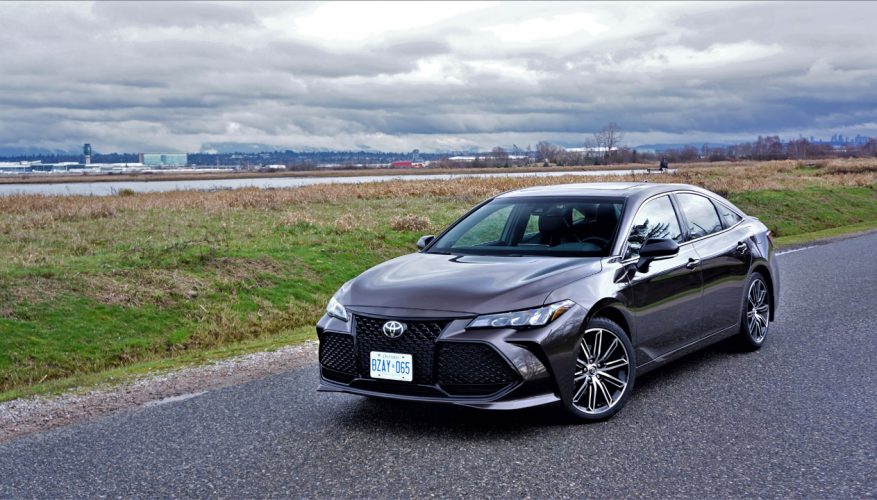 Beauty is truly in the eye of the beholder, and to many a luxury car buyer it seems desire grows commensurately with the size of its grille. Enter the 2019 Avalon, which incidentally is identical to the upcoming 2020 model, a car that’s gone from having one of the larger front grilles in the industry to now leaving very little room for anything but the grille.

The frontal aperture looks larger in as-tested base XSE trim due to a gloss-black surround instead of the top-line Limited trim’s chrome, while the deeper, inkier, glossy mesh grille inserts appear more menacing than the loftier model’s horizontal ribs. Toyota further emphasizes the XSE’s sporting nature with black side mirror housings and a black rear deck lid spoiler, small in size yet quite noticeable when the car is doused in a lighter paint finish than my tester’s lovely Brownstone metallic.

Even the XSE’s LED headlamps look more piercing than the Limited’s upgraded triple-beam LEDs, while its once graceful taillights have given way to a single body-wide LED infusion hovering over a thick black diffuser-style lower bumper cap bookended by a quad of circular chrome tailpipes with the XSE or two large rectangular chromed tips for the Limited. Likewise the XSE’s machine-finished 10-spoke 19-inch alloys with black-painted pockets are decidedly more aggressive looking than the upscale Limited’s shiny silver multi-spoke 18-inch rims.

With the 2019 refresh one thing is for sure, Toyota isn’t willing to idly stand by watching ever-increasing SUV popularity destroy their beloved full-size flagship luxury sedan without a fight. The new Avalon now begs to get noticed, which shows a significant turnaround from the model’s formative years when it was more content living life in the shadows.

My favourite Avalon was the 2005–2012 fourth-generation model, a truly elegant car that provided much better performance than its classy styling promised. While hardly a sport sedan, the Av has continued to improve over the years, with this fifth-gen model, particularly in base XSE trim, its most dynamic yet.

To be clear, the XSE is only base in Canada. South of the border, where Avalon sales are more than 100 times greater (Americans bought 22,453 Avalons during the first nine months of 2019, compared to just 212 over the same three quarters in Canada, despite the US only having 10 times the population), it’s offered in XLE, XLE Hybrid, XSE, Touring, Limited and Limited Hybrid trims. As anyone shopping for an Avalon knows, the hybrid isn’t offered here, Toyota having long provided this fuel-friendly alternative in Lexus’ ES line instead. The two full-size luxury sedans share all subsurface components, by the way, and thanks to even stronger sales under its premium brand (in Canada too, where the ES is only outsold 35 to 1, with 37,896 US deliveries compared to 1,081 in Canada), the Avalon continues to exist north of the 49th.

The numbers above attest that you, dear reader, either digest all things automotive or, if considering purchasing, have very unique taste. Yes, the Av certainly has exclusivity going for it, an appeal that isn’t wholly price related, in that you’ll likely never see one of these pull up next to you at a stoplight, or show up in your neighbour’s driveway, unless he or she happened to like yours so much they went out and bought one of their own.

This is more likely to happen with the new generation, as it will no doubt get noticed, but the overwhelming trend is downward in this full-size volume-branded sedan category. Even the mighty Dodge Charger and Chrysler 300 pairing that saw 4,704 collective sales over the same nine months had to accept this comparatively large number was the result of a significant downward slide of 14.15 and 39.31 percent respectively, while GM’s Chevrolet Impala and Buick LaCrosse managed 2,075 total deliveries during this period for respective 16.96 and 15.13 percent downturns, which no doubt only added internal support for their upcoming discontinuation. The 710 sales of Nissan’s Maxima and mere 7.07 percent year-over-year shrinkage is downright impressive next to Toyota’s aforementioned 212 Avalon delivery total, the latter a 17.19-percent reduction, whereas all must look positively meteoric from Kia’s standpoint, its Cadenza finding just 19 buyers since January for the segment’s worst 54.76 percent YoY plunge. Shockingly Kia hasn’t cancelled the Cadenza for Canada, but in fact will introduce a totally redesigned one for 2020.

The multi-information display just mentioned sits in the middle of a mostly analogue instrument cluster, which is nothing new, but I like that it does more than just provide the usual trip information. For instance, it also provides route guidance instructions right where you need them, while the big touchscreen atop the new centre stack might lack in the way of colour and therefore doesn’t make enough use of its high-resolution capability, but it does incorporate Toyota’s new Entune smartphone integration, which I like a lot better than Android Auto. The system lets you connect to functions, music and info like traffic conditions, fuel stations, weather forecasts, stocks and more via a variety of apps including Scout GPS, Yelp, Slacker, NPR One and more through your smartphone.

All these features are great, but honestly some should be part of the base package. The Avalon XSE is hardly cheap at almost $43k, so why does Toyota force its very small number of interested buyers to buck up another five grand just to get a heated steering wheel? Sure, plenty of other features come with this trim too, but a warm steering wheel rim should be a prerequisite for designating the word “luxury” on any car attempting to lure in Canadian buyers. After all, our winters have been getting colder, not warmer as our news media wants us to believe (February 2019 was the coldest ever in Vancouver). Making matters worse, the Av on this page was the only car I tested in weeks without a toasty steering wheel, the others being an off-road specialty 4×4 pickup truck and a small luxury-branded car. Toyota is normally quite slow in adopting trending features, the latest Camry not offering one at all. This deficit was made worse while writing a review of a 2019 Kia Forte during the same week, which included a heated steering wheel in its most basic $16,000 model. Fortunately Toyota is starting to figure out that it’s been losing sales to upstarts like Kia, and now offers an optional heated steering wheel in the new 2020 Corolla, and will do likewise for the Camry in 2020.

The Avalon’s interior refinement is quite good above the waist, meaning that soft, pliable composites are used across the entire dash top and both front and rear door uppers, while a softer padded and stitched surface treatment gets added along the middle portion of instrument panel, just below a beautifully textured metal-like inlay and really attractive three-dimensional metallic and black horizontal section that melds into the corner vents. The bottom half of the dash, including the glove box lid, is made from a harder plastic, as are the lower door panels, but the doors’ middle sections, below the premium-like uppers, are comprised of soft-touch synthetics, ultrasuede and stitched leatherette.

The centre stack is mostly made up of black, glossy, glass-like surfacing, the upper section blending seamlessly into the main infotainment touchscreen, and the bottom portion housing a digital readout plus controls for the HVAC system. This doesn’t come across as upscale as the previous Avalon’s metal-finished centre stack surface treatment, the latter model’s tiny hollowed-out hockey stick-shaped switchgear absolutely stunning, albeit the new design modernizes the look and is certainly easier to use. The top portion of the centre stack appears to hover in the air, thanks to buttresses that allow access to a large wireless phone charge pad sitting below a padded retractable bin lid. The rest of the lower console is finished in stitched and padded leatherette, and is nicely detailed with satin-silver trim around the gear selector and cupholders, while this aluminized trim completely surrounds the console and centre stack as well, plus the steering wheel, much of the switchgear, and other highlights elsewhere. It’s a very attractive cabin that does a decent job of providing premium levels of luxury, even including fabric-wrapped A-pillars.

The new Av backs up its dramatic new styling with more energy under the hood, its enhanced 3.5-litre V6 now put out 10 more horsepower and 17 additional lb-ft of torque for a new total of 278 and 265 respectively, while in XSE trim this improved performance is complemented by an “Engine Sound Generator” that beefs up the exhaust note artificially through the audio system when Sport mode is engaged. Before any snide comments, BMW does this with its M cars and Ford with its Mustang and Ecoboost-powered F-150 pickup trucks (plus a number of others, I’m guessing), the result being music to the ears of gearheads.

Even better, Toyota has mated its upgraded V6 with a completely new eight-speed automatic transmission (not a CVT like one of the Av’s supposedly sportier competitors), and by so doing said goodbye to its antiquated six-speed gearbox, plus they’ve add steering wheel-mounted paddle shifters to make the entire package more engaging.

Underpinning the new Avalon is an extended version of the stiffer, more agile chassis that improved the newest Camry, and likewise makes the new Lexus ES more fun to live with, while the XSE’s front struts and rear multi-link setup is sport-tuned even further before being bolted to the one-inch larger 19-inch rims and rubber noted earlier.

Despite all the performance upgrades, the Avalon’s ride continues to be very comfortable, but as anyone reading about the upgrades would imagine, the comfortable ride came with a lot more capability than ever before. The extra horsepower proved enjoyable off the line and the new automatic certainly more engaging than the outgoing one, particularly with Sport mode engaged, although it still took too long for those shifts to occur, so a true sport sedan this is not. Still, this XSE handled considerably better through fast-paced curves than its already adept predecessor.

I also found the seating position very good for a Toyota. Actually, I find Toyota improving their cars’ driving positions in most models recently tested, in that they now offer more telescopic steering column reach to complement their already good seat adjustability. This allowed me to move the Avalon’s driver’s seat rearward enough for comfortable legroom while extending the steering column amply for relative arm comfort and reasonable control, all this necessary due to my having a longer legged, shorter torso frame. I could have used more steering column extension, but the Av’s setup was passable.

This said the driver’s seat’s two-way powered lumbar support was disappointing, particularly considering competitors in this price class offer four-way powered lumbar support that better meets up with the small of my back. Still the seats were quite comfortable without using the extra lumbar support, while the rear seating area is massive, bordering on limousine-like, and comfortable as well. Likewise, the trunk is large at 456 litres (16.1 cu ft) and offers 60/40 folding access for longer items, although a centre pass-through would improve passenger/cargo flexibility even more.

All said I think most luxury sedan buyers that spend a little time with the new Avalon will like it. It’s well built, as most would expect from Toyota, should be reliable, is packed with most of the features one would expect in a $40k-plus car, and provides wonderfully comfortable yet surprisingly sporty performance.

What’s more, with the 2019 model year ending and the identical new 2020 Avalon soon arriving, Toyota is motivated to sell all the remaining stock, which is why you can to now save up to $2,500 in additional incentives (at the time of writing). Just go to CarCostCanada to learn more, and while you’re at it, check out both 2019 and 2020 model year pricing information, including trims, packages and individual options, and also find out about the latest rebates and even dealer invoice pricing, that puts you in charge when negotiating with your local retailer.