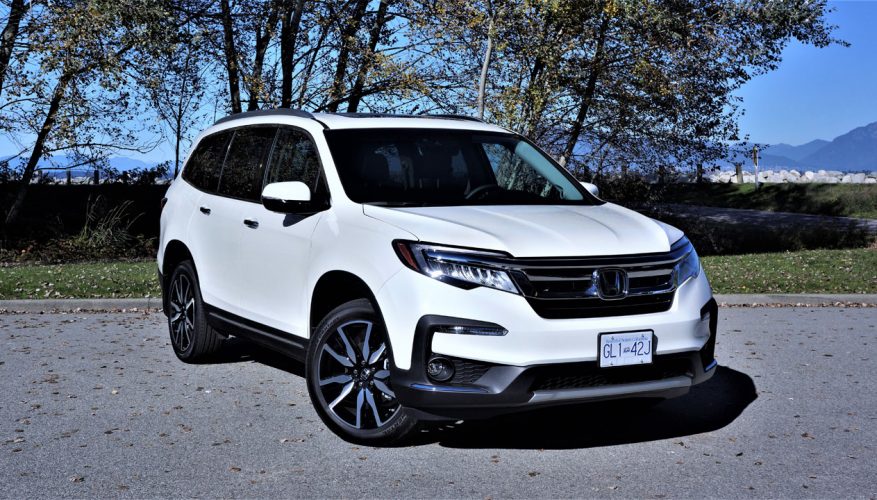 In classic Honda fashion, the update from third-generation 2016-2018 Pilot 1.0 to 2019 Pilot 2.0 is ultimately subtle, but somehow the changes made have resulted in a wholly better looking crossover SUV.

The new Pilot’s mid-cycle makeover adds a more assertive looking truck-like grille above a stronger front bumper and fascia design, which tie in better to other models throughout Honda’s lineup. The new look is further improved by a wonderfully complex set of full LED headlamps in top-line Touring trim, sporting Honda’s signature vertical elements for a whole new level of sophistication when compared to lesser trims.

Incidentally, trims below Touring get standard low-beam-only LED headlights that feature a less distinctive projector-style design, while an attractive set of updated LED tail lamps are the same with all trims, these positioned above a new rear bumper.

Additionally, silver skid plates below both front and rear bumpers toughen up the look of most trims, while matte and glossy black versions of the same garnishes adorn base and Canadian-exclusive Black Edition versions respectively, while Honda adds a little bit of extra exterior chrome to Touring trim, including bright metal door handles, and new 20-inch machine-finished alloys with black painted pockets that result in a more upscale look from front to back. All of these small details have really added up to a handsome mid-size crossover SUV, and while it remains a large three-row family hauler that can actually fit real adults in its rearmost seats, the Pilot somehow appears light and lithe, as if it’s actually fun to drive.

Rather than just refreshing the styling and leaving at that, Honda went further by improving the auto start-stop system in top-tier Touring and Black Edition trims, so that it shuts off and restarts the engine quicker and with less fanfare, a fix that should cause more owners to leave it engaged and therefore do a better job of minimizing fuel consumption and emissions. I’m a big fan of that, and never had a problem with this feature throughout my test week.

Likewise, my top-line Pilot Touring tester’s updated nine-speed automatic transmission performed flawlessly, delivering what seemed to be smoother more effortless shifts when tooling around town or cruising along the highway, and feeling more precise when flicking through the gears on the highway. This said I never had a problem with the outgoing nine-speed when testing it in a 2017 model, but some have complained about refinement and therefore Honda made improvements that should appease such disgruntled owners.

Base LX, plus mid-range EX and EX-L Navi owners would have had no such issues due to their Pilots incorporating Honda’s time-tested six-speed autobox, while the one-size-fits-all 24-valve, SOHC 3.5-litre V6 is about as seasoned as modern-day engines get, remaining quite potent for the class at 280 horsepower and 262 lb-ft of torque, and kitted out with direct-injection, i-VTEC, Variable Cylinder Management (VCM) that shuts off a bank of cylinders under light loads to improve fuel economy, plus an Active Control Engine Mount (ACM) system to help reduce noise, vibration and harshness levels, which it seems to do effectively.

Thanks in part to standard Intelligent Variable Torque Management (i-VTM4) AWD, supported by Honda’s Intelligent Traction Management System, the latest Pilot felt as sporty off the line as its new look lets on, while it carried that newfound nimbleness through fast-paced corners with an easy, composed nonchalance that defied its near full-size proportions, combining this agile handling with a thoroughly comfortable, compliant ride that only became unsettled when pushed beyond what’s reasonable on a particularly poorly paved section of curving roadway.

Driven at calmer speeds my Pilot Touring tester was not only ideally stable and thoroughly comfortable, but came very close to achieving its claimed Transport Canada five-cycle rating of 12.4 L/100km in the city, 9.3 on the highway and 11.0 combined, with my weeklong average being 11.7 L/100km of mostly city driving on flat roadways. Of note, six-speed models are estimated to achieve 13.0 city, 9.3 highway and 11.3 combined. Factoring in new carbon tax-infused pump prices, these numbers are quite good for such a large utility.

I didn’t have opportunity to tow a trailer during my test week, but take note there’s no difference in ability with either transmission, the Pilot’s rating set to 1,588 kilograms (3,500 lbs) in base form or 2,268 kg (5,000 lbs) when fitted with its available towing package.

Hauling in mind, the Pilot provides plenty of cargo space for all your load carrying needs, with 524 litres (18.5 cubic feet) behind the third row, or 510 litres (18.0 cubic feet) with the Touring and Black Edition; 1,583 litres (55.9 cubic feet) when that 60/40-split third row is folded flat; plus a range from 3,072 to 3,092 litres (108.5 to 109.2 cubic feet) when both rear rows lowered, but take note that models with second-row captain’s chairs are missing a centre section that may need to be gapped when trying to fill it fully with gear. Some others with this problem attach a carpeted extension to the backside of one seatback that can be flipped over the open section of load floor when filling with cargo, but no such innovation was shown here.

These sliding and reclining captain’s chairs, which straddle a slightly raised floor-mounted console with cupholders and shallow bin, don’t come standard in Touring trim, but instead replace a regular bench seat that’s good enough for three adults abreast. The model tested, therefore, only provided for seven occupants, whereas the base version is one of the more capable family haulers thanks to eight available seatbelts. I’ve tried both, and the captain’s chairs are certainly more comfortable, thanks in part to fold-down armrests and seat heaters. I also appreciated the much more open and visually airy interior provided by the big panoramic sunroof included with Touring and Black Edition upgrades—all other trims but the base model include a regular powered moonroof up front.

Lastly, I should also mention a number of standard $41,290 Pilot LX features that are also part of the Touring trim package, such as a remote engine starter, keyless proximity access, pushbutton ignition, a windshield wiper de-icer, an overhead console-mounted conversation mirror that doubles as a sunglasses holder, tri-zone automatic climate control, three-way heatable front seats, the HondaLink Assist Automatic Emergency Response System, and the list goes on (all prices are sourced from CarCostCanada, where you can also get all the latest rebate info as well as dealer invoice pricing that could save you thousands).

Particularly notable, all Pilot trims feature a large 7.0-inch TFT multi-information display (MID) within a mostly digital gauge cluster, the former featuring bright and clear high-resolution colour graphics, plus easy operation via steering wheel-mounted controls, while the 8.0-inch tablet-style infotainment touchscreen atop the centre stack is even more fully featured, starting with a wonderfully colourful array of tile-like graphics that appear to be inspired by the iPhone and iPad. The inclusion of standard Apple CarPlay is therefore fitting, although take note that Android Auto is also standard, plus Bluetooth smartphone connectivity with streaming audio, a superb multi-angle rearview camera with dynamic guidelines, and more.

While most everything I’ve said thus far has been positive, I was somewhat surprised that the Pilot only provides soft touch synthetic surfacing across its dash top, as well as a piece on the instrument panel just ahead of its front passenger that wraps overtop the centre display, and the front door uppers, plus of course the usual door inserts and armrests. This means the rear door uppers were hard plastic, which is strangely low-rent for this class, while some rivals even go so far to provide the pliable synthetic treatment to the lower dash including the glove box lid, while also wrapping the A pillars in fabric to improve refinement further.

On the positive, the driver’s seat was very comfortable, but this said its two-way powered lumbar support didn’t meet up with the small of my back, so I didn’t use it the way I would if it also adjusted for height. Speaking of seats, I should say more about the third row that actually was quite comfortable, with plenty of legroom for a five-foot-eight adult (with long legs and a shorter torso), about three to four inches available for the knees when the second row was pushed back to its rearmost position, and loads of headroom.

My last and final complaint won’t be an issue for many Pilot owners, but I found it odd that Honda expended so much energy (and money) creating the Touring (and Black Edition) model’s electronic gear selector yet didn’t replace the foot-operated parking brake with an electromechanical unit. It’s not like lifting the foot and pressing down on a parking brake is a big negative, but it certainly ties what is otherwise a modern and advanced vehicle to the past. I’m guessing Honda will replace it for the next generation Pilot, so I, like some others, will look forward to this upgrade.

And yes this is where I need to say, if a foot-operated parking brake, two-way lumbar support, and a little more hard plastic than I’d like to see is all I can find to complain about after a weeklong test, Honda is doing pretty well with the new Pilot. All in all this is easily the best Pilot I’ve ever driven, and one of the more competitive crossover SUVs in its three-row mainstream volume class. I like its new styling, appreciate the amount of effort Honda’s engineers put into refining the new model’s drivetrain and suspension, and therefore enjoyed my time behind the wheel. It’s certainly an easy SUV to live with thanks to ample passenger and cargo space, while its fuel economy didn’t put me in the poorhouse. For these reasons and more the 2019 Pilot is easy to recommend.