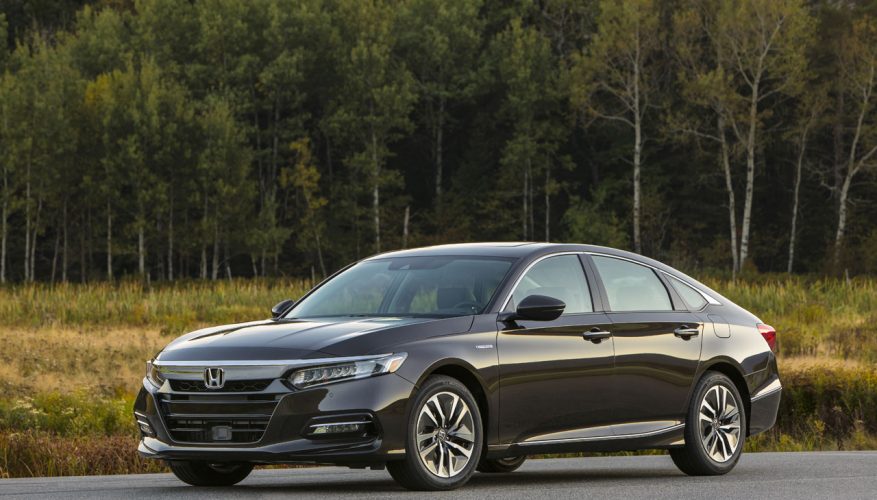 Timing is everything, or so the saying goes, but with Canadian pump prices rising at an alarming rate in some jurisdictions, it appears the age-old adage couldn’t be truer and Honda’s timing couldn’t be better for the all-new 2018 Accord Hybrid.

The new model’s official April launch date arrived just in time for Metro Vancouver fuel prices to hit record highs, bouncing up against a dollar and 60 cents per litre resistance that has since proven penetrable. Local authorities aren’t promising any relief over the summer, with some predicting the exact opposite.

Even if you live elsewhere in Canada, current fuel prices may still be eating into your budget. As of Thursday, July 5, GasBuddy.com showed the average Canadian gasoline price as 134.4 cents per litre, which is a 2.6-cent-per-litre increase from the prior week. That represents a 26-cent rise from the average of 109.4 cents per litre in July of 2017. While it hasn’t yet reached the highest average pump price ever recorded in Canada, which was 142.4 cents in August of 2008, this is still a hard pill to swallow for those driving less fuel-efficient vehicles.

Enter the new 2018 Accord Hybrid, which combines all the positive attributes of the recently redesigned 2018 Accord sedan, a model that recently beat the new Toyota Camry and all other new entries to win the revered Automobile Journalist Association of Canada’s (AJAC) 2018 Canadian Car of the Year award, with a highly advanced two-motor hybrid-electric powertrain capable of a claimed 5.0 L/100km in the city, 5.1 on the highway and 5.1 combined.

This brings Accord Hybrid fuel economy within close range of the new 2018 Toyota Camry Hybrid, which is estimated to achieve 4.9 city, 4.8 highway and 4.9 combined in base trim, albeit take note that a fully loaded Honda Accord Hybrid Touring still gets the same mileage as the base model, whereas the top-line Camry Hybrid XSE is rated at 5.3, 5.0 and 5.1 respectively, losing out to the Accord Hybrid in the city, where it matters most.

A unique two-motor hybrid powertrain joins an efficient 2.0-litre Atkinson-cycle four-cylinder engine to provide the Accord Hybrid with a class leading total system output of 212 horsepower, while its electric drive motor puts 232 lb-ft of almost instantaneous torque down to the front wheels for strong straight-line performance.

To be clear, one of the electric motors drives the front wheels, while a smaller secondary motor serves mainly as a generator, providing electric current to the drive motor in order to supplement or replace power from the battery during lighter loads, such as cruising. The second motor also starts the engine that in-turn adds torque to the wheels, but it’s never used as the motive driving force for those wheels.

Additionally, the car’s Electric-Continuously Variable Transmission, or E-CVT, removes any need for a conventional automatic transmission, or even a traditional belt/chain-operated continuously variable transmission (CVT), both of which inherently rob performance and efficiencies from the powertrain. Instead, Honda’s E-CVT drives the front wheels directly through four fixed drive ratio gearsets, without the need to shift gears or vary a planetary ratio. This means there is no “rubber-band” effect when accelerating as experienced in regular CVTs, or in other words the engine is never forced to maintain steady high rpms until road speed gradually catches up, this process causing a much-criticized audible “droning” effect. Honda claims its direct-drive technology benefits from 46 to 80 percent less friction than a conventional automatic transmission, depending on the drive mode.

Another positive is styling, thanks to the new Accord Hybrid not visually deviating from the conventionally powered Accord sedan’s design, the latter having received a lot of positive feedback from the automotive press and customers alike. This said, Honda changes some minor trim pieces as well as the wheels, but few will likely notice any visual differences between a regular Accord sedan and the Accord Hybrid.

The high-quality 2018 Accord interior has been carried forward into the new Accord Hybrid too, with premium-level soft-touch synthetic surfaces in key areas, attractive metallic and matte-finish woodgrain inlays, high-resolution digital interfaces, and more, while the Accord Hybrid is just as accommodating for front occupants and rear passengers as the roomy conventionally powered model. Its voluminous trunk hasn’t changed in size either, providing 473 litres of available space and handy 60/40-split folding rear seatbacks for fitting in longer cargo.

Like the regular Accord, there are noticeable differences between the base Accord Hybrid and top-line Touring trim, such as an upgraded set of full LED headlamps with the addition of light emitting diodes for the high beams, unique signature LED elements around the outside of the headlamp clusters, chrome-enhanced door handles, and if chosen the availability of no-cost Obsidian Blue Pearl exterior paint instead of standard Crystal Black Pearl and $300 White Orchid Pearl, the only two colours offered with the base model.

Unexpected safety features can be found in the standard Honda Sensing suite of advanced driver assistance equipment, including Adaptive Cruise Control (ACC) with Low-Speed Follow, Collision Mitigation Braking System (CMBS), Forward Collision Warning (FCW), Lane Departure Warning (LDW), Road Departure Mitigation (RDM), Lane Keeping Assist System (LKAS), and traffic sign recognition, this being enough to earn the regular 2018 Accord a Top Safety Pick from the IIHS when equipped with its upgraded headlights, while all Accord trims get a best-possible five stars from the NHTSA.

While the new Accord Hybrid is exciting enough on its own, it was preceded by the even more efficient Honda Clarity Plug-in Hybrid, which is sized similarly to the Accord yet features totally unique styling that helps it stand out more distinctively as an alternative fuels vehicle. The Clarity Plug-in Hybrid starts at $39,900, and receives a Transport Canada fuel economy rating of 5.3 L/100km in the city, 5.9 on the highway, and 5.6 combined in regular hybrid mode, or much better efficiency when its considerably larger battery is externally charged on a regular basis and its EV mode is engaged, resulting in much greater electric-only range.

Additionally, Honda has just added a new compact hybrid to its lineup. The stylish 2019 Insight is sized identically to the Civic Sedan that shares its underpinnings and some bodywork, even offering the same accommodating interior roominess and an identical 428-litre trunk with convenient 60/40-split folding rear seatbacks. The new Insight will be Honda’s most affordable hybrid at $27,990 when it arrives this summer, and achieve the best fuel economy amongst Honda hybrids at a claimed 4.6 L/100km city, 5.3 highway and 4.9 combined.

Honda’s expanding lineup of hybrid-electric cars is a good sign that it’s on the right track, and the Accord Hybrid should put up a good fight against the Toyota Camry Hybrid, Ford Fusion Hybrid, Hyundai Sonata Hybrid, Chevrolet Malibu Hybrid, Kia Optima Hybrid, but this said Honda really needs to electrify its SUV lineup so it can go up against Toyota’s RAV4 Hybrid and Highlander Hybrid, plus others from competitive brands that are expected to arrive soon.

Oddly, Honda sells a CR-V hybrid in Europe, but it’s not yet available in North American markets, while similarly Nissan offers a Rogue Hybrid to its U.S. customers, but not here in Canada.

For now, the new 2018 Accord Hybrid, 2018 Clarity Plug-in Hybrid, and 2019 Insight point the Japanese brand in what most consider the right direction. Only time will tell if we receive hybrid versions of the popular compact CR-V and mid-size Pilot as SUV alternatives to Toyota’s offerings.