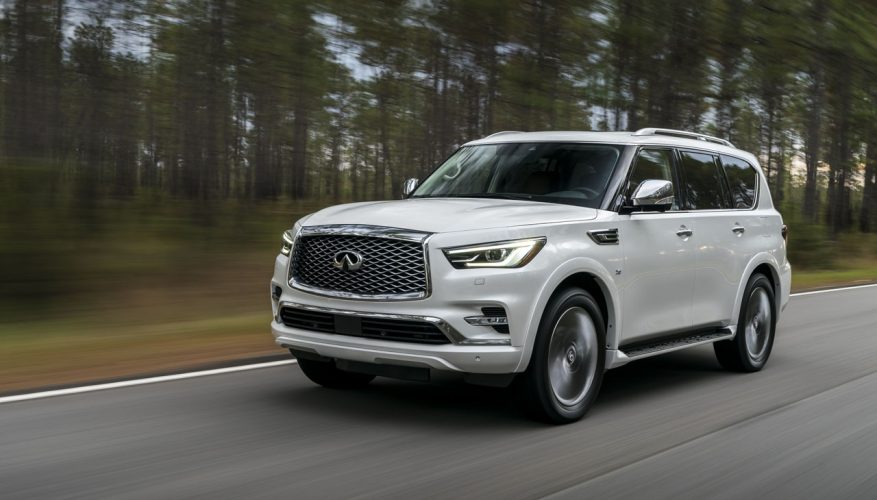 Drive a 2018 Infiniti QX80 and you’ll quickly be comparing it in kind to full-size SUV competitors from Land Rover, Lexus, and even Mercedes-Benz, and a little research into its origins will immediately tell you why.

The QX80, like the Nissan Armada that shares its platform architecture, is based on the legendary Nissan Patrol, a rugged, go-anywhere SUV nameplate that’s as old and well respected in global off-road circles as Land Rover’s Defender, Range Rover and others, Toyota’s Land Cruiser that forms the basis for the Lexus LX, and Mercedes’ G-Class, or Gelandewagen. All have decades-long ties to militaries worldwide, not to mention relief organizations, policing, businesses requiring wilderness travel, etcetera, and that on- and off-road prowess can immediately be felt by driver and passengers. The QX80 is a solid, well-built vehicle first and foremost, and an impressively finished luxury SUV after that, which is all the more reason to be amazed at its highly competitive pricing.

As sourced on CarCostCanada.com, the handsomely refreshed 2018 Infiniti QX80 is now available for just $77,350 plus freight and fees, which means you can get into a well-equipped, impressively finished base model for $32,250 less than the 2018 Lexus LX 570, $35,650 less than the Land Rover Range Rover, and $51,550 less than the base Mercedes-Benz G 550. What’s more, the QX80 is $9,190 more affordable than the 2018 Cadillac Escalade while representing a $10,300 savings over the new 2018 Lincoln Navigator, which will have you questioning whether Infiniti priced its full-size SUV too low after comparing them all directly.

To the ultimately wealthy such pricing trivialities won’t make one bit of difference, but value matters to smart luxury SUV shoppers trying to maximize the most from their hard-earned income. To that end the QX80 won’t disappoint, starting with a comprehensive refresh for the 2018 model year that includes a redesigned grille, front fascia, hood, fenders, fender vents, and rear bumper, while its LED headlamps, LED taillights, LED fog lamps and side indicators have been dramatically revised as well. Infiniti has rounded out the new exterior design with new 20- and 22-inch alloy wheels, while new exterior colours include Moonstone White, Mineral Black and Champagne Quartz.

Moving inside, the 2018 QX80 receives a newly refined cabin with a contrast-stitched wrapped upper instrument panel and a new shift knob across the line, plus a new stitched and leather-wrapped steering wheel hub/horn pad and diamond-patterned quilting for the upgraded door trim and seat inserts when opting for the Technology Package.

Even with the Technology Package included, the 2018 Infiniti QX80’s increased $85,500 price rings in lower than all of the aforementioned competitors, while a new no-cost optional colour treatment includes Saddle Brown with Charcoal Burl Trim, plus the QX80’s Wheat motif has been updated from low contrast to high contrast. Likewise the Graphite grey interior gets updates too.

Those seats are covered in semi-aniline leather upholstery, plus heated and climate-controlled up front, while the second-row captain’s chairs are heated (seven-passenger only) and feature tip-up easy entry for the third row, with standard 60/40-split power-folding and reclining third row seats also added to the standard feature set, plus a powered rear liftgate, a stainless steel rear bumper protector, an integrated Class IV tow hitch and seven-pin wiring harness with cover, tire pressure monitoring, Hill Start Assist, Trailer Sway Control, all the usual active and passive safety systems, and more. Lastly, an eight-passenger QX80 can be had for the same price.

The QX80’s 5.6-litre V8 is also standard, making 400 horsepower plus 413 lb-ft of torque and mated to a seven-speed automatic transmission powering all four wheels via Infiniti All-Mode 4WD with Snow and Tow Modes.

“The 2018 QX80 commands a heightened flagship presence within the Infiniti portfolio,” said Adam Paterson, managing director, Infiniti Canada. “The updated model provides upscale luxury for all passengers, as well as a suite of advanced technologies that elevate confidence and control on any road.”

It’s no wonder QX80 sales have experienced a major upswing lately, with this updated 2018 model having its strongest sales ever in March, 2018, with 147 units sold and a year-over-year gain of 113.0 percent. The QX80 has shown strength through all three months of this year’s first quarter too, with sales growth up a solid 66.4 percent.