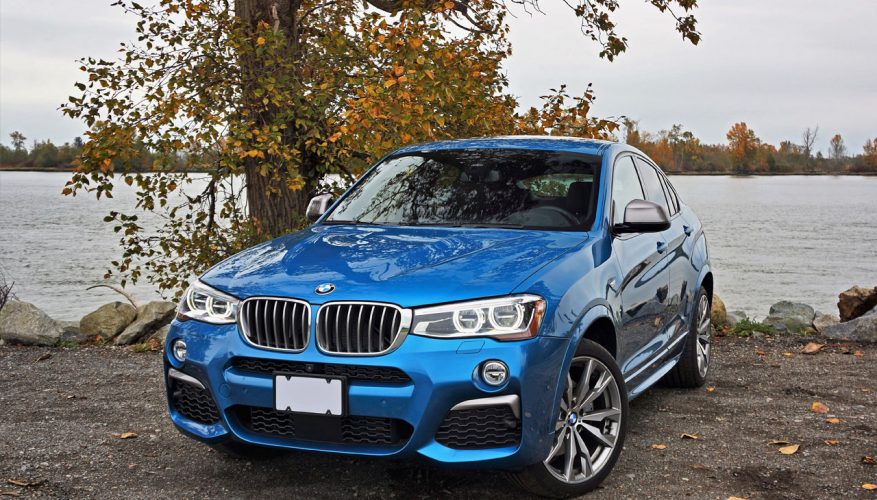 By: Trevor Hofmann
BMW might be best known as the self-acclaimed “Ultimate Driving Machine” maker, but along with that arguably deserving title it should also be considered the ultimate luxury niche filler.

Seriously. The Munich-based premium marque manages to create obscure niches within the unique niches few other luxury rivals dare tap into, and when others don’t work for their namesake brand they adapt them for Mini or Rolls-Royce.

The X4 was the obvious result of downsizing the already successful X6, the result of which sees even more sales than the larger mid-size model. Last year the X4 found 1,236 Canadians who liked the idea of a five-door sports coupe mixed with a compact SUV, whereas 1,178 BMW buyers chose the larger of the two. These aren’t game-changing sales compared to 5,417 X3s and 6,942 X5s sold within the same 12 months, but every little bit adds up, as BMW has also learned with its multiple 3 Series, 4 Series and 6 Series body styles (although this last model’s sales are so slim that the 6 Series Coupe is now history).

Regarding the five-door coupe-cum-SUV (or whatever you want to call it), a nod should be given to Infiniti for its original FX that more or less originated the idea and subsequent QX70 (still available, albeit rare), while Land Rover’s Range Rover Evoque took the concept down a size or two to the entry-level compact SUV class, and even went so far to create a three-door SUV coupe and now a two-door convertible variant (it’s a lot cooler than it sounds).

Hitting even more at BMW’s core, Mercedes-Benz recently responded directly to the X6 and X4 with the mid-size GLE Coupe and compact GLC Coupe respectively, while a special mention should go out to Acura and its ill-fated ZDX, a model most people loathed (hence its cancellation) and I happen to still love (especially in black).

Despite the X4 xDrive35i being all over BMW Canada’s retail website (they must have a bunch of these left over in 2016 trim), for model year 2017 the German manufacturer only sells two versions of the X4 in North America starting with the more fuel-friendly $48,700 X4 xDrive28i and topped off with the bahn-storming $60,700 X4 M40i. The X4 xDrive35i has been discontinued (you’ll find this out when you try to build it in BMW’s configurator), but due to the X4 M40i in these pages, which entered the scene last year, no one should shed any tears.

Where the xDrive35i was a blast to drive due to its twin-scroll turbocharged 3.0-litre inline-six that made 300 horsepower and 300 lb-ft of torque, the M40i takes the same engine and puts a much more engaging 355 horsepower and 343 lb-ft down to its four torque-vectoring wheels. Like the less potent model, the M40i utilizes an eight-speed automatic with paddle shifters; a version of that transmission also incorporated into the entry-level X4 xDrive28i, which incidentally is good for 241 horsepower and 258 lb-ft of torque.

Truly, the X4 M40i is one of the sportiest SUVs in the compact segment, even when matched up to Porsche’s Macan in non-Turbo trim. The eight-speed automatic’s paddle shifters provide plenty of control, enhanced via Eco Pro, Comfort, Sport, and Sport+ modes, the first fuel-efficient mode where it spent most of its time amid city traffic, this along with auto idle start/stop and regenerative braking making it capable of a 12.8 L/100km city, 9.5 highway and 11.3 combined five-cycle Transport Canada rating.

Sport and Sport+ modes accentuate all of its most enticing character traits, and to this end the X4 M40i delivers a real feeling of connectivity with the road below, despite a rather tall and narrow body. I know it’s wider than some, but the only way I was able to set myself up ideally in order to take advantage of all its performance was to crank my seat fairly high while extending the steering column fully, so my wrists were appropriately positioned overtop the rim and legs not too close to the pedals. If you don’t know what I’m talking about I recommend one of BMW’s reasonably priced advanced driver training courses, which will teach you proper seat, steering wheel and mirror setup before you even get out on the track, or for that matter the road, the first step to achieving optimal car control.

Once I felt comfortable I was away to the races, so to speak, but I must say that tall driving position and lanky feel means the X4 will never be as ideally suitable to performance driving as any given 3 Series. Of course, this is an SUV and therefore compromises must be made, but just in case you’re interested in the X4 M40i because of its handy liftback design and sporty swooping rear glass, you might want to consider the equally potent yet better handling and even prettier 440i xDrive Gran Coupe instead.

That’s not to say the X4 M40i isn’t absolutely brilliant fun in the city, on the highway, or anywhere else, and on that frolicking theme more capable of slaying backcountry two-laners than the majority of supposed sports cars it’ll annoyingly pull up behind, bypass faster than the onboard chumps who thought they’d bought a performance car can utter “what the hell was that”, all before blurring them into an oblivious rearview dot that almost immediately disappears behind the next double curve. Yes, it’s that good.

Where does it fail? Not in driving dynamics, but those who might consider stepping up from the aforementioned 4 Series or any given 3 Series might be put off by some interior finishing. Granted, the 3 and 4 are two of the segments’ best, so don’t expect soft touch synthetics down the entirety of its door panels, the X4’s doors finished in hard-shell plastic at their lower extremities. It does offer up high quality pliable lower dash panels, however, including the glove box lid, and most other surfaces are up to BMW’s usual standards, so don’t fret too much.

Likewise the X4 M40i’s primary gauges are purely digital and fully configurable so you can tweak them to your heart’s content, other than four lovely silver rings around the dials that are set out in relief for a particularly elegant 3D look and, of course, an homage to all BMWs of yore. The crisp, bright and colourful high-resolution instrument cluster is filled with all the information you’ll likely ever require, and what’s not within is over on the centre stack-mounted infotainment display that’s about as impressive as anything available in the class.

This version of iDrive is entirely new for 2017, and standard across the X4 line. It boasts an ultra high-resolution display filled with a completely new menu design, faster processing, and enhanced graphics. Its optional navigation, part of the $5,700 Premium package, is superbly detailed and its accuracy never faltered throughout my test week, while the upgraded surround camera provided a helpful overhead view and excellent clarity, as well as the convenience of the standard monitor’s dynamic guidelines and visual proximity sensors that show green, yellow, and eventually red to warn of potentially damaging objects, to easily slot it into the tightest of parking spots.

That Premium package also includes door exit lights and handle-area illumination that brightens the SUV’s entryway for 20 seconds when the doors are unlocked; Comfort Access, which is BMW-speak for proximity-sensing keyless entry; a head-up display that projects key info onto the windscreen, a real bonus for navigation directions and other features; auto-dimming side mirrors, priceless on any nighttime road trip; satellite radio; and BMW’s ConnectedDrive Services that includes a smartphone app as well as other features like the ability to read and or listen to the news, although the digitized voice isn’t very good.

Now that I’m talking extras, my tester also included the $3,500 Executive package that adds full LED headlamps with dynamic cornering and auto high beams, a universal garage door opener, an excellent 600-watt 16-speaker Harman/Kardon surround audio system, four-way powered front lumbar supports, and heatable rear outboard seats; while its $2,200 Technology package included a 270-degree bird’s eye surround parking monitor (not quite 360 degrees due to just having extra cameras under the side mirrors), active blindspot detection, and BMW’s Driving Assistant with lane departure warning via a vibrating steering wheel, after which it automatically assists you back into your lane unless you choose to signal. For another $1,000 you can upgrade to a more advanced system called Driving Assistant Plus, which has some autonomous capability on the highway and more, but this wasn’t included in my tester.

Standalone options included $250 headlight washers; $350 Speed Limit Info that displays the posted limit and warns if you’ve exceeded it, a potential moneysaving feature; $600 wireless device charging with extended Bluetooth and USB; and my tester’s beautiful $895 Long Beach Blue Metallic paint. The Black Nevada leather upholstery was standard, and stunning burled walnut inlays with chrome accents a no-cost option. If these aren’t to your liking, BMW has a number of alternatives that should satisfy.

As with all BMWs, the X4’s switchgear is of the highest quality, the shifter and rotating iDrive controller especially nice, while I personally love how narrow the steering wheel spokes are, and how minimalist their various buttons and scrolling rocker switches.

I’ve mentioned the driver’s seats’ impressive adjustability, but I have yet to note how incredibly comfortable it was, not to mention how well it embraced buttocks and backside during aggressive manoeuvres, the lower squabs even including manual thigh extensions for cupping under the knees. And that optional four-way powered lumbar just noted is well worth the extra coin, as it provided much-needed lower back support in just the right spot.

There’s seating for three in back, although I’d recommend two adults and maybe a child in the middle. Someone smaller might even appreciate the raised centre position, this the result of outboard buckets that are nicely sculpted for similar lateral support to those up front. This said their deep squabs push the knees higher than average, which while allowing a taller person to fit within might not be the most comfortable for some. I had about five inches ahead of my knees when the driver’s seat was set for my admittedly smaller than average five-foot-eight frame, plus another three to four above my head and plenty from side-to-side. As noted, heatable rear seats were included plus a comfortable flip-down centre armrest with dual integrated cupholders.

Like with any SUV, the X4 is designed in a liftback layout with a large, wide hatch in back, but its sloping rear roofline presents a sporty compromise that infringes on overall cargo capacity, so expect more coupe-like proportions than the more commodious X3 it’s based upon. By comparison the X3 offers up 550 litres (19.4 cubic feet) behind its 40/20/40 split-folding rear seatbacks and 1,600 litres (56.5 cubic feet) if laid flat, whereas the X4 makes do with a still reasonably accommodating 501 litres (17.7 cubic feet) before lowering its 40/20/40 configured rear seats, at which point capacity increases to 1,399 litres (49.4 cu ft). It’s pretty difficult to complain about 49 and 201 lost litres respectively (approximately 1.7 and 7.1 missing cubic feet), especially considering the X4’s sleeker styling. Someone moving up from a Honda CR-V or sideways from an Acura RDX might be disappointed there aren’t any sidewall levers for automatically lowering those seatbacks, but they’re close enough for most to unlatch from the back manually.

On that note the X4 is suitable for small families, but I’m going to guess most with children will opt for the X3’s more practical design, or better yet an X5 that can be had with three rows. Still, for adventuresome kid-less couples the X4 might be ideal, and that it can be had with plenty of as-tested M-division upgrades along with flashy blue, purple and red striped “M” badging make it hard to pass up. I certainly enjoyed my week behind the wheel and never found it short on space, and while my eyes still long for a 440i Gran Coupe in Estoril Blue with an M Performance package, this isn’t about me. I recommend you try both and decide for yourself.
©(Copyright Canadian Auto Press)
Car Shopping Tools