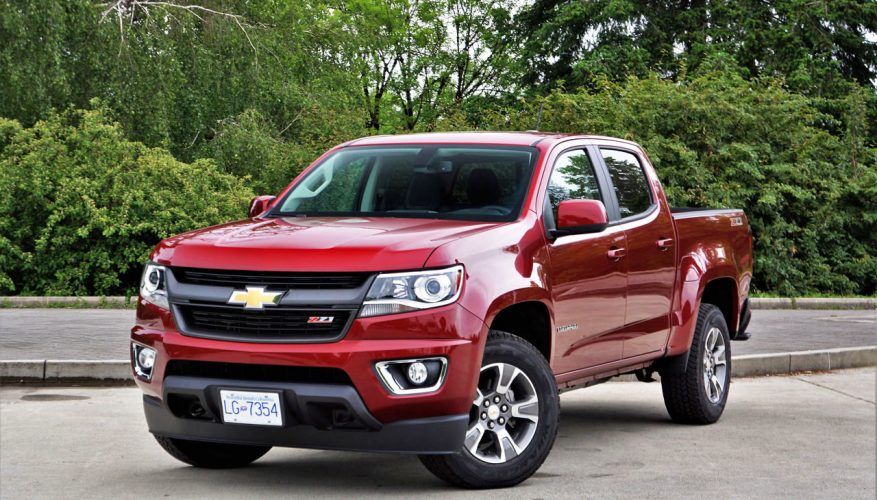 Just how competitive are GM’s new Chevrolet Colorado and GMC Canyon mid-size pickup trucks on the Canadian market? Toyota’s longtime best-selling Tacoma is still ahead, but so far this year we’re talking about a sales lead of the finest of margins possible.

Are you sitting down? The Tacoma is just one single solitary truck more popular than the GM twins, with Toyota’s small truck sales at 5,041 units from January 1 to May 31, 2017, and Chevrolet/GMC’s twosome at 5,040 deliveries during the same five months. What are the chances of this? And how much did missing the sales lead by just two trucks hurt at GM Canada’s Oshawa HQ?

Then again, GM Canada can be plenty happy about providing a mid-size truck that’s so impressive they’ve managed to gain an incredible amount of ground against the once totally dominant Toyota since arriving back on the scene in 2014. In fact, the two GM trucks managed to outsell the Tacoma last year with 12,652 sales compared to 12,618, which is again very close.

Their U.S. counterparts haven’t been so successful due to the GMC variant dragging its heels against the much more popular Chevy, the former brand’s year-to-date sales just 12,372 units compared to the bowtie brand’s 40,670, which combined equal 53,042 units compared to the Toyota USA’s 78,153 Tacomas. Likewise, last year’s total sales were 108,725 units for the Colorado and 37,449 for the Canyon resulting in total combined deliveries of 146,174, which sounds great until compared to the Tacoma’s 191,631 sales.

On a per capita basis it’s quite clear Canadians are much bigger mid-size GM pickup truck fans than our friends to the south—so much for the heartbeat of America.

Having recently driven every new 2017 truck on the market, except for the GMC version (I’ve got one booked for later this month, but it’s mostly the same if you hadn’t already figured that out) and the Nissan Frontier (it’s way too old to consider calling new despite being dubbed with the 2017 model year, although it had its strongest 12 months of sales in more than a decade last year), I can understand why the GM trucks are selling so well. They’ve got styling, performance, efficiency, interior design and execution, infotainment excellence, and those brilliant rear bumper corner steps going for them. And I haven’t even driven the recently added 2.8-litre Duramax turbo-diesel yet (hopefully that’ll be in the upcoming Canyon).

Behind my 2017 Chevy Colorado Z71 Crew Cab 4WD tester’s smiling grille is GM’s 3.6-litre DOHC, direct-injection V6 with a variable intake manifold and variable valve timing making 308 horsepower at 6,800 rpm and 275 lb-ft of torque at 4,000 rpm, which is three horsepower and six lb-ft of torque more than last year. Suffice to say it moves along quickly enough, but it’s also quite efficient due in part to cylinder deactivation that temporarily cuts fuel to three of its cylinders when coasting or otherwise not required, and auto start/stop that shuts the engine off entirely when it would otherwise be idling, both new to this V6.

My tester’s advanced mode-selectable eight-speed automatic transmission with manual shift capability has much to do with its efficiency, this having the most forward speeds of any pickup truck in the class, plus when the Trailering Package is added it now includes a standard trailer brake controller (previously only available with the diesel), helping it achieve up to 3,175 kilos (7,000 lbs) of trailering weight as tested, whereas the diesel 4×4 can pull up to 3,447 kg (7,600 lbs).

Strangely, of all the potential variations of cab size (there are three), bed length (there are two), engines (there are three), transmissions (there are two), drivelines (two again), and trim levels (there are many), all of the Colorados loaned to me over the past three years have been almost identical in configuration. The first two Z71 Crew Cab Short Box V6 4WD models were even the same Red Hot colour, while this latest 2017 model is trimmed out nearly the same once again other than its new for 2017 Cajun Red Tintcoat paintjob, although even that’s another shade of red (Graphite grey is also new for 2017, while Laser Blue and Orange Burst were late additions to the 2016 model).

Even their interiors have been the same, with carbon copy black and grey, leatherette and cloth upholstery. They’ve all been very nice, but how about some variety GM? I’d like to try a base truck with the 2.5-litre four, or for that matter the diesel I’ve been going on and on about. The new ZR2, Chevy’s mid-size answer to Ford’s off-road racing replica Raptor, would be a wonderful change. That model with the diesel might be just about perfect.

The diesel was new last year, by the way, with this latest 2017 model having some additions of its own. These include the aforementioned nudge upward in V6 performance, plus a new larger 7.0-inch infotainment touchscreen incorporating an updated Chevrolet MyLink interface with Apple CarPlay and Android Auto, available with the base WT (Work Truck) and standard in mid-range LT trim.

How do I like it? Have I experienced any problems so far? What would I change? Does it deserve its success? I’ll answer these questions and more in an upcoming review. Until then I recommend you come back for more…