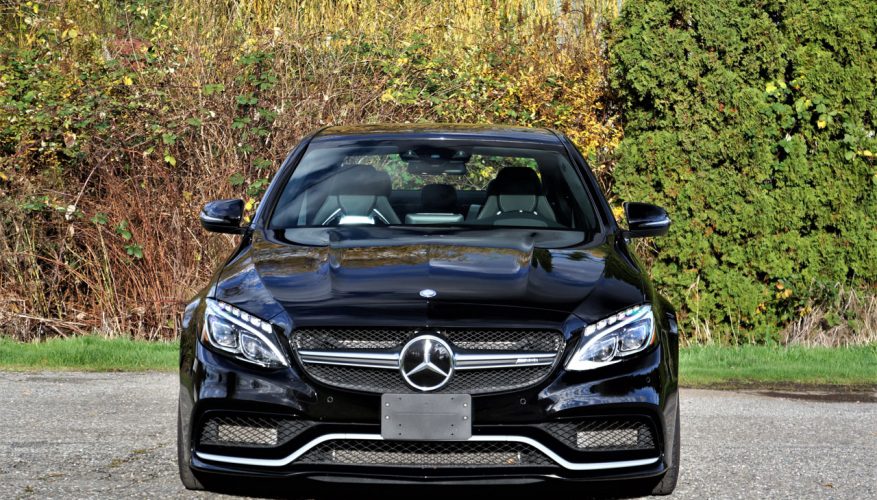 By: Trevor Hofmann
No automaker has more fully capitalized on its in-house performance sub-brand than Mercedes-Benz with AMG. Where BMW’s M-badged fleet has grown to 10 models in Canada, Audi now offering four cars under its top-tier RS banner (and two R8s that qualify), Cadillac having three Vs vying for contention, Lexus earning street cred with a couple of F models, and Volvo anteing up with an equal pair of Polestars, Mercedes’ Canadian division gives you no less than 32 individual AMG models to choose from, plus more will be added to their arsenal soon.

Sticklers might argue that Mercedes’ four- and six-cylinder “43” models aren’t true AMG cars because they don’t house insanely powerful twin-turbo V8s between their front wheels (that are hand assembled by a single technician no less), but drive one and you’ll quickly realize they’re serious performance cars and a lot more aggressively tuned than, say, Lexus’ F-Sport models. Regarding that last point, it would be wholly unfair to hold back a couple of extra points from Cadillac for its CTS V-Sport and CT5 Performance, while Infiniti’s Q50 and Q60 400 Red Sport models should be added to the mix, and some of Audi’s S cars go quite quickly too. I’m probably missing a few (did I hear someone say Tesla?), but no matter how many sport-tuned models I attempt to raise up to performance sub-brand status, Mercedes’ AMG will by far remain the dominant force to be reckoned with.

Within the C-Class lineup there are nine alone, including C 43, C 63, and C 63 S versions of the sedan, coupe, and convertible. AMG C 43 models use a heavily massaged version of Mercedes’ 3.0-litre V6 that pushes the D-segment compact from standstill to 100km/h in a mere 4.9 seconds ahead of a 210-km/h (130-mph) top speed thanks to 362 horsepower and 384 lb-ft of torque driving all four wheels through a new AMG-tweaked nine-speed auto with paddles, whereas the AMG C 63 only drives the rear wheels via M-B’s upgraded AMG SpeedShift seven-speed auto yet the 100km/h mark flashes past in just 4.1 seconds before attaining a terminal velocity of 250 km/h (155 mph) due to a 469 horsepower 4.0-litre V8 with 479 lb-ft of torque behind its unique oval sport grille. As for the C 63 S, fuse that last combination of hardcore components together with a hyper-tuned version of the same engine, now capable of 503 horsepower and 516 lb-ft of torque for a 4.0-second sprint to 100km/h with Race Start mode engaged and a top speed of 290 km/h (180 mph), and you’ve got a recipe for some serious civil disobedience.

There’s nothing subtle about the way it looks either, especially in black. Building on the much sportier new C-Class design, the AMG team added a deep Formula One-inspired lower fascia, extended the side sills, topped the deck lid off with a small but effective spoiler, and finished off the rear end with a radical rear diffuser housing a quad of rectangular tailpipes, and then trimmed everything out in satin finish aluminum from front to back. “V8 BITURBO” badges adorn each front fender, while diamond-finished split five-spoke 19 inch alloys with grey painted pockets on 245/35 front and 265/35 rear Dunlop Sport Maxx ZR rated rubber frame some of the largest cross-drilled and vented brake rotors in the industry, their massive calipers painted red to match the LED taillights in back. This is one badass looking car, and it only gets better inside.

At first glance it’s visual overload. All of the satin finished aluminum, black lacquered hardwood, two-tone leathers, and colourful digital interfaces coming together in an eye-scorching display of hyper-sport meets over-the-top luxury. It’s not for the faint of heart, highlights including one of the sportiest flat-bottomed steering wheels I’ve ever seen, comprised of black leather with a light grey stripe at top-centre, matching light grey stitching around the inside of the rim, black psuede handgrips left and right, and aluminum spokes, with the same metal used for the paddle shifters in behind. The aluminum trimmed gauge cluster is equally impressive, its twin dials finished with black carbon-fibre faces, red needles, and thin red rings around each, while a large TFT colour multi-information screen is packed with handy go-to features.

The centre stack is at least as artistically inspired, with Mercedes’ usual big fixed tablet infotainment display on top, its resolution, depth of colour and graphics amongst the best in the biz, but it’s the three circular aluminum HVAC vents below that’ll wow would be buyers and their passengers alike, not to mention an identical pair capping off each corner of the instrument panel. Just below is a gorgeous array of aluminized toggles with textured tops for controlling said tri-zone HVAC system, with each prompt resulting in yet more brilliant graphics from the display above. Trust me, you’ll like it. A CD slot and yet more media, etcetera switchgear separates those toggles from the main infotainment controller on the lower console beneath, this Mercedes’ latest palm rest and rotating dial combo that’s as aesthetically titillating as it’s tactilely wonderful. Knurled metal edges join satin-finish surfaces for grippy yet silky smooth operation, while finger tap, swipe and pinch gesture capability gets served up with myriad quick-access buttons for getting the most out of infotainment and dynamic driving systems.

As you might expect there’s no shortage of “/////AMG” branding to remind that this is no ordinary C-Class, each perforated black leather and grey psuede-trimmed front sport seat badged with a shiny metal plaque, but you might not initially notice as their four-point seatbelt harness-style pockets are made from what look like solid aluminum castings. The seats are powered via aluminized switches on the otherwise black leather and grey suede door panels, these next to the sweetest looking speaker grilles you’ll likely see in any car, the scripted “Burmester” logo saying much about the sensational sound quality hidden within. Natural light from above makes everything noted appear all the nicer thanks to a massive dual-pane panoramic sunroof overhead. Truly, the C 63 S takes interior design, materials quality, and refinement to entirely new levels of compact luxury D-segment greatness.

It’s strange to refer to the C-Class as a compact, as it seems much larger than any Civic or Corolla. It’s considerably longer, wider and certainly heavier than those entry-level cars, but it’s not as long as mainstream mid-size models either. Compact it is, but no C sedan can be considered small inside. Most body types will find room aplenty up front, and I can’t see many being uncomfortable in the wide, supportive and oh-so comfortable rear seats. To make the trunk usable for stowing long items they split via the Euro market’s usual 40/20/40 configuration, which is much more useful than the domestic or Japanese luxury norm of 60/40. With optional heated rear outboard seats ablaze, every passenger can enjoy a warm behind while heading home from the ski hill.

And that would be quite the ride. OK, if you’re heading to the mountain on a regular basis I’d recommend one of Mercedes’ many 4Matic all-wheel drive models, the AMG C 43 for instance, but then again a set of grippy winters joined by the C 63 S’ standard assortment of electronic active safety equipment would probably plow through most snow drifts laid down where you’d be parked for the day. It certainly would be fun to find out how well it handled slippery situations, although I’d keep Race mode turned off unless there were no towering metal light posts in close proximity. As it was, time spent with the C 63 S was devoid of any white fluffy stuff or even rain, the tarmac bone dry and as adhesive as one could want, ideal conditions for getting the most out of the aforementioned thrust and twist.

A quick reminder, we’re talking about 503 of the former and 516 of the latter, the near instant result of right metal pedal to floorboard being smeared dotted yellow lines ahead and linear blurred side scenery together with a momentary loss of breath and gravitational overwhelm, but be forewarned the exhilarating motive experience, adrenaline inducing howl of screaming V8, and raucous roar of dual sport exhaust is often followed by uncontrollable giggles. The speed is outrageous, all posted on the windshield along with revs and more via full-colour head-up display. Its lightning starts and quick-shifting gearbox almost guarantees first corner holeshot, unless you’ve got Lewis Hamilton’s unlucky fingers (his seven pole positions converted into just two first-lap leads during 2016 is all I need to say), but the real fun starts when speed rises and corners arrive.

While specially tuned AMG Dynamic Select Sport Plus and just noted Race modes are available, regular Sport mode did me fine more often than not (Dynamic Select includes Comfort too, but no Eco mode), the C 63 S making its considerable 1,730-kilo (3,814-lb) curb weight seem almost nonexistent, those big 19s noted earlier, and superbly sorted sport suspension setup combining for some seriously skilled road-holding, much thanks to lighter and tighter AMG made springs and shocks with three-stage damping, an AMG-developed front axle, torque vectoring rear-wheel braking, and plenty more. Dramatic dips and radical hairpins rattled me more than the car, nothing I could throw at it upsetting the undercarriage. The C 63 S casts a wide shadow that helps during fast-paced transitional shifts, while its gargantuan 14.2-inch brakes, with six-piston fixed calipers up front quickly eradicated potential problems. This is a driver’s car supreme, yet it’s best in its hyper-sedan class for transforming back into pure luxury once the fun is done.

Really, despite razor sharp control on the track, the C 63 S delivers up a compliant ride around town and on the highway. I could drive it all day, its comfortable ride, upright stance, great visibility, and ample size making for a near effortless daily commuter.

Certainly it would eat a hole in your gas budget, the C 63 S never intended to lure disenfranchised C 250 BlueTec customers back to the fold with a claimed rating of 13.4 L/100km city and 9.6 highway, but then again it’s better than others in the super-sedan segment that offer much less reward. The 425 horsepower BMW M3, for instance, is only good for an estimated 13.7 L/100km city and 9.0 highway, whereas the 464 horsepower Cadillac ATS goes through a claimed 14.7 and 9.8, and the 467 horsepower Lexus RC F requires a shocking 15.2 and 9.5! All the attention paid to saving fuel in Mercedes’ championship-winning Formula One effort seems to be paying off on the street.

The AMG C 63 S does everything right, a car seemingly without fault. I know that’s impossible, but Mercedes-Benz’ AMG division has taken refined performance to a new level entirely, and the result is one of the finest four-door sedans to ever grace the planet. That it can be purchased for a mere $84,100 plus freight and fees is as shockingly agreeable as the car itself.