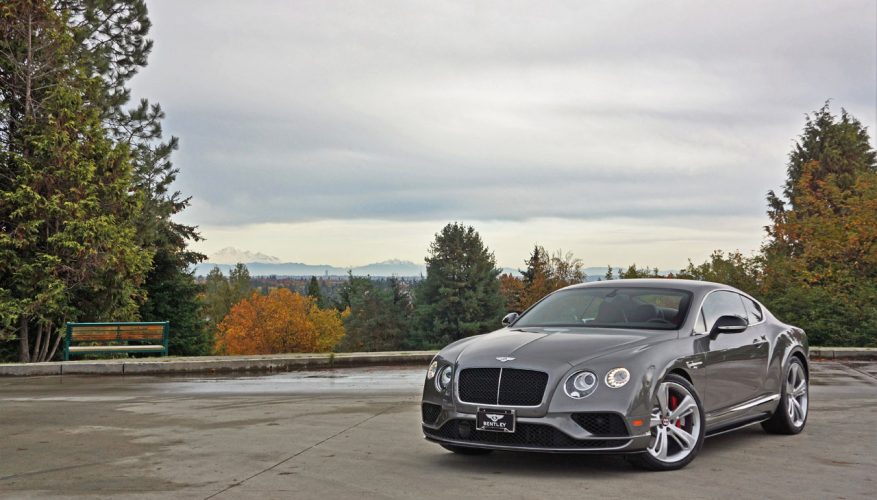 By: Trevor Hofmann
The Continental GT remains a shockingly attractive car. Let’s consider for a moment that it was introduced in 2003. My first stint behind the wheel was in autumn 2004, when Bentley introduced the mildly updated 2005 model at a press event in Seattle. To me it was the most beautiful car available at the time, and the best combination of performance and luxury I’d ever had the pleasure to drive.

Oh how a dozen years can fly by. Then again experience can add to the relevance and readability of a story, and I’ve enjoyed a lot of fabulous Continental GTs since then. Bentley redesigned the GT in 2011, and while its basic shape stayed mostly the same its details made for a thoroughly refreshing update. A lighter weight GT V8 was introduced with the remake, sporting a twin-turbocharged 3,993cc powerplant capable of 500 horsepower and 487 lb-ft of torque that resulted in sprints to 100km/h of just 4.8 seconds, and a 309 km/h (192 mph) top speed.

As important to Bentley was a staggering 25-percent reduction in fuel consumption when compared to the 6.0-litre W12. Much of the gain came from a new eight-speed automatic that replaced the aging six-speed unit, although cylinder deactivation, which shuts down four of the engine’s eight cylinders under lighter loads, certainly helped as well, while the new GT also benefited from on-demand steering assistance, improved engine heat management, overrun alternator charging, and more eco-friendly tires.

The Continental GT before you is the even sportier V8 S, which came to market in 2014. Its twin-turbo 4.0-litre V8 makes 520 horsepower and 502 lb-ft of torque, which translates into acceleration that’s just as quick from standstill to 100km/h as the 567 horsepower W12 version, both cars managing the feat in a mere 4.5 seconds, yet the V8 remains 25-percent more efficient. This is important, but for me and many others it’s more about performance, and by that I’m not only referring to the immediate rapidity and simultaneous rush of adrenaline experienced at takeoff, but rather the rousing sound of the V8’s roar during the process.

First off, Bentley engines have long produced a distinct turbocharged V8 note, or at least the Brooklands and Arnage models I drove previously did. I’m aware supercharged inline six cylinders were once the engines of choice, but having only ever sat shotgun in a late ’20s era Bentley while cruising down the highway, and then at a mere trot compared to the legendary ability of such cars, I never developed a fondness for the timbre, but the big 6.75-litre V8 that Bentley shared with Rolls-Royce years ago is a sound I won’t soon forget, and while this 4.0-litre eight-cylinder doesn’t quite cause the air to reverberate and earth to quake with the same godlike omnipotence, the sound emanating from its twin tailpipes is at least as alluring, if even with a more ferocious Ares-inspired rage.

It’s the burbling and blatting backpressure when lifting off the throttle at higher revs that causes a quick glance at the steering wheel hub to make sure I’m not piloting a hyper-tuned Mustang GT, but, no offence Dearborn (and more so none to Crewe), the leather-clad and metal-infused wheel, plus the splendiferous peripheral view makes it obvious this could only be a Bentley. To be clear the Continental GT is more serene when easing off its shiny metal petrol pedal and disengaging its sportiest driving mode, but my time with this particular V8 S would be short, which meant that its friendliest environmental setting was put into use for a moment’s test to see that, yes indeed this makes a wonderful city car for tooling around town and, with seats set to heated massage and Thievery Corporation sashaying through the unbelievably clear and crisp upgraded Naim audio system (I had to keep checking in my rearview to make sure Lou Lou Ghelichkhani wasn’t singing live in the back seat), it’s even quite relaxing.

Back to sport mode, response to full pressure on the throttle is astonishing, the GT V8 S feeling like a light, lithe, compact sports coupe in juxtaposed reality to its 2,295-kilo (5,060-lb) girth, its standard all-wheel drive digging into pavement at all corners to eliminate squat and expedite speed, its large column-mounted knurled metal paddles allowing full connectivity between hands and machine, and the ZF-sourced Quickshift eight-speed auto below the console expectedly delivering the ultra-fast reaction to input the 8HP gearbox has been noted for since inception.

Try counting out 4.5 seconds the next time you’re behind the wheel of your car and see what your speedometer reads; I doubt it’ll be 100km/h. That’s quick for any vehicle, and would otherwise be nonsensical in a luxury hardtop as opulently equipped and therefore weighty as the GT, but it’s true as tested by many like-minded auto scribes, my partner poised with my ultimately accurate Bulova Precisionist Wilton Chronograph 96B182 in hand as I shouted “Time!” at exactly 100km/h (I couldn’t think of anything more creative to shout in the moment), her finger immediately responding and a time of 4.473 indicated via the Bulova’s 10ths, 100ths, and 1,000ths sub-dials. Our second pass resulted in 4.534, third 4.469, fourth 4.522, etc. OK, this method isn’t 100-percent accurate, but it’s brilliantly fun.

Of course, the concept of fun is relative. As impressively engineered as this timepiece is, and enjoyable as the whirling artistry of its topmost sub-dial is to watch (there’s really nothing quite like it), admiring a wristwatch in “action” is hardly as fully engaging and adrenaline inducing as pushing the GT V8 S through perfectly orchestrated S-curves at otherwise highly un-recommended speeds, one such set conveniently lined up as part of a local waterfront two-lane roadway. The big Bentley’s gravity-defying transitional response is so totally composed it could almost be described as uneventful, other than the shock and awe of such a car completing the task unscathed. Of course I rewarded the feat with another pass the other way, and yet another, and so on, its continuously damping air sprung sports suspension, complete with auto height adjustability, leaving me just as slack-jawed as previous incarnations have done in years’ past. Yes, driving any Continental GT is addictive, and in my books it remains the quintessential sport-luxury coupe. The lighter weight and sensational power of the GT V8 S simply heightens the experience.

With an eye to performance 20-inch alloys aid the base GT V8 S, albeit my Mulliner Driving Specification tester was shod in 275/35ZR21 Pirelli P-Zeros mounted on gorgeous painted directional five-spoke alloys with unique aero venting. The GT V8 S aerodynamic upgrades continue with a specially designed front splitter, subtle side sill extensions, and a working rear diffuser in Beluga gloss black that framed the optional dual sport exhaust, whereas the V8 S suspension is slightly lower than the base car’s and red-painted brakes more robust, these calipers nicely matching the red Bentley “B” on the wheel caps, both ideally contrasting my test car’s beautiful Granite grey paintwork.

The GT V8 S cabin combines all that’s good about Bentley interiors, such as handcrafted stitched leathers, beautifully polished hardwoods, billet aluminum trim, rich wool carpeting, and more, with enough glitz and glam to make famed ’65 Continental owner Keith Richards feel as if he’s channeling Marc Bolan; “Blue Lena” was more conservatively finished in tan leather upholstery whereas my wholly modernized GT V8 S tester was done out in Hotspur red and Beluga black, most of the former comprised of diamond-quilted leather and contrast stitching, this part of the previously noted Mulliner upgrade, while some of the latter included piano lacquered hardwood instead of the usual glossy albeit natural browns for a more sporting effect. Even the roofliner was red and black leather, the more colourful portion being a thick stripe extending from the overhead console right down the middle of the roof.

It’s impossible for a classic car aficionado not to love what Bentley has done with this particular GT V8 S, but I could understand if an owner wanted something slightly subtler, which Bentley will of course accommodate. Additional details with the GT V8 S include knurled metal detailing for the shift lever and ventilation controls, plus scripted “V8S” on each sill tread plate.

I might chide the majority of luxury brands for not offering a fully configurable TFT primary gauge cluster, but I believe most Bentley customers will appreciate that analog dials still hover above the steering column. I drove Aston’s new DB11 recently and, while impressed by the high quality of its state-of-the-art digitized instruments, I was simultaneously saddened by the loss of the DB9’s classic chronograph watch-style setup, so Bentley had better deliver some truly astounding animated 3D imagery if they ever eliminate these beautiful instruments for a gussied up smartphone interface.

It gets a colour multi-information display at centre, this much needed to keep the car up to speed with the tech-set, plus a sizeable high-resolution colour infotainment touchscreen atop the centre stack, complete with all the expected features, including a backup camera with active guidelines, navigation with excellent mapping, audio functions that enhanced usability of the brilliant Naim stereo (it’s truly amazing), Bluetooth phone and media connectivity, car settings, and more. To be completely honest, the graphics aren’t quite up to the standard of today’s best systems, plus it also lacks finger gesture technology such as pinch and swipe, plus proximity-sensing capability, nor does it incorporate Apple CarPlay, Android Auto, or MirrorLink for optimal phone connectivity.

Most of the dual-zone auto HVAC controls can be found below within a separate interface, whereas the standard three-way seat heater buttons are positioned on the lower console, and were joined by optional three-way ventilation controls, which also come packaged with aforementioned massage function. Additional extras include contrast stitching, twinned centre armrests, and special duo-tone floor mats on the inside, a set of Beluga black gloss side mirror caps on the outside, and more, the additions upping the GT V8 S’ $254,980 base price to $317,910 before freight and fees; the entry-level GT V8 starts at $234,190.

As you might expect the superbly comfortable and ideally supportive front seats are wonderfully adaptable to any and every body size and shape, a fact that no shortage of NBA and NFL stars can attest to, while the GT’s rear seats are roomy enough for regular sized adults, as long as taller folk aren’t seated up front. The big coupe also gets a reasonably accommodating trunk at 358 litres (12.6 cubic feet), made slightly lower when the Naim audio system is chosen, and take note that skiers will need to rethink their priorities if they want to test out the standard all-wheel drive on the way to the slopes, as there’s no pass-through or folding seatbacks. Bentley now makes the Bentayga SUV for such activities, which I have learned during a couple of stimulating stints behind the wheel is not only an ideal traveling companion for well-to-do families, but also a fully engaging Bentley from a performance perspective.

It’s difficult to say if Bentley will enjoy a proportionate level of success with its new SUV as Porsche does with its Cayenne, but as long as any new profits go towards building cars like the Continental GT the addition can only be good.

As it is, the Continental GT remains one of my favourite super coupes, with the lighter yet equally sporty V8 S only increasing my respect for the car and admiration for those who build it.
©(Copyright Canadian Auto Press)
Car Shopping Tools