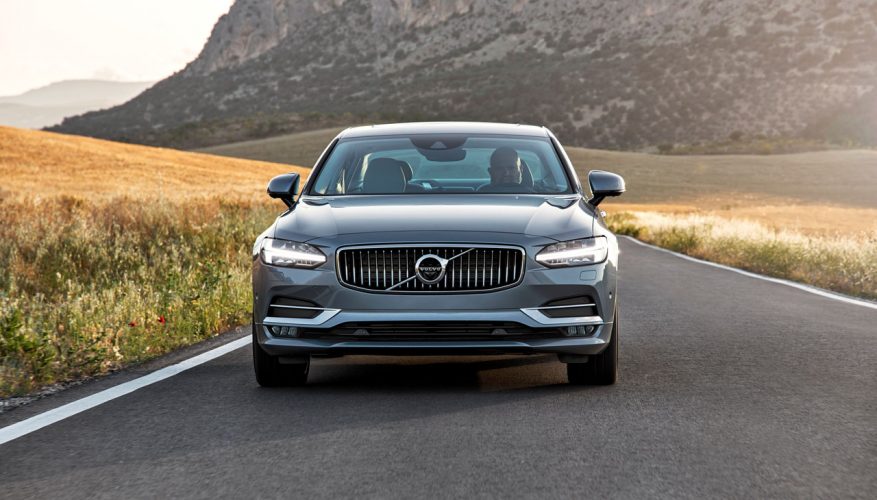 By: Brian Armstead
Most everyone is familiar with Volvo cars. Affectionately known as “bricks on wheels,” these sturdy Nordic trackers were high on safety and reliability in the past, but lacking in style and luxury. No one ever placed Volvo, Mercedes-Benz, BMW and Cadillac in the same circle. The once-befallen Cadillac has steamrolled its way back into the mix with the impressive CT6 sedan, and Volvo has kicked the door in with the hard-to-believe-it’s-a-Volvo S90.

There’s nothing carried over from earlier Volvo sedans like the S80. This is a clean sheet attempt to right what was a sinking Volvo ship.

For decades, Volvo had been a niche automobile for drivers and families who wanted the ultimate in safety and convenience. Indeed, my daughter came home from her birth hospital in a 740 wagon. Yes, it was built like a tank. I can recall a Volvo advertisement with several Volvo wagons stacked on top of each other to show roof strength. Another showed a Volvo driving off a cliff, landing nose first, and crash testers opening the doors afterwards. Yes my friends, these cars were uber safe, yet utterly boring. As competition grew within the industry from upstarts like Lexus and Infiniti, Volvo decided to sell its car business to focus on commercial truck sales and was ultimately purchased by Ford in 1999, and then left to dangle in the wind when Ford attempted to sell the company during the 2008 global economic crisis.

On the brink of extinction, the two proud Swedish automakers, Volvo and Saab (the latter owned by GM at the time), found themselves in dire straits with mass layoffs and no development/research capital as the Swedish Government did not have the financial means to bail out the pair.

So for several model years, Volvo just survived. The XC90 and XC60 SUVs, and S40, S60 and S80 sedans carried the bulk of the load. In 2010, Volvo Cars was sold to China-based Geely Holding Group, which wisely provided funds to get Volvo back on its feet, but left the Swedes alone to do what they do best, build quality cars.

Last year’s XC90 was the first home run hit by the new Volvo. Dealers can barely keep them in stock. For 2017, the S90 rewrites whatever it is you thought about Volvo.

“Swedish luxury is about the beauty of simplicity. To have the quality and the materials to achieve this is an incredible privilege,” said Thomas Ingenlath, senior vice president of design for Volvo Car USA.

As you approach the S90 you’ll be struck by its beauty. The wheels are stretched to both ends of the car, resulting in a sizeable cabin chock full of luxury and safety features. Up front, it’s easy to see design inspiration from the iconic P1800 coupe, built from 1961-1973, in the floating grille. Inside, “Sensus” telematics with a nine-inch touchscreen (arrayed like an iPad Mini), Wi-Fi (with six months free service), navigation, road sign info, a rearview camera, an auto-dimming rearview mirror, Bluetooth with hands-free audio streaming, a 330-watt sound system, satellite and HD radio, an eight-inch driver display within the primary gauge package, heated front seats, leather upholstery, walnut inlays, a moonroof, four-zone auto climate control, a “Clean Zone” air quality system, adaptive cruise control, power-folding rear headrests, powered child locks, a powered trunk lid, illuminated “Volvo” sill plates, proximity access, keyless ignition, and much, much more are amongst standard and optional features.

For all the bells and whistles opt for the $6,100 “Inscription” package, which includes LED headlights with “Active Bending” (they follow inputs from the steering wheel), a 12.3-inch driver configurable primary instrument display, Nappa soft leather upholstery and key fob (yes, they wrap the soft high-grade leather around the key fob), Scandinavian-sourced hardwood inlays, a full-leather dashboard and upper door panels, laminated side windows to block out sound, and a load more comfort and luxury features to enhance your S90 experience.

Several other packages are also available, including a 20-inch wheel upgrade at $975; the must-have 1,400-watt, 19-speaker Bowers & Wilkins Premium Sound System Package at $3,250; and a “Vision” package featuring a 360-degree surround view camera, power-folding side mirrors, auto-dimming exterior mirrors, plus blind spot monitoring and cross-traffic alert for $2,000; and more.

Even with all of the luxe features in the S90, Volvo wants consumers to know that things are not always what they seem to be elsewhere in the luxury sector. With so many wannabe “premium” interiors available these days, don’t confuse faux luxury with the real luxury the S90 offers. In a copy of “Ninety,” the Volvo magazine for S90 owners, Volvo’s Design Director in charge of Colour and Material, Ebba Maria Thunberg, explains the S90 mystique: “If it looks like wood, it is wood.” Thunberg goes on to explain other features: “Your key fob’s leather is colour-coordinated with your car’s interior; Our Orrefors Crystal gear stick (available in the upcoming S90 T8) is made using traditional glass-blowing techniques; Touch the exclusive air vents and there is a weight and coolness to them; The rear seats are as finely crafted as the front seat, offering the same comfort, support and integrated protection; And we have two woods — one is Linear Walnut and the other is Flame Birch, a type of wood only found in Nordic countries. We’ve given it a dark tint and a glossy coat that is a modern reinterpretation of classic automotive wood.”

Want more proof that this car is the real deal? Consider Volvo’s interior air quality system dubbed “Clean Zone,” which monitors incoming air for harmful substances and actively protects you from them. If you’re driving through a tunnel, for example, and the system detects high levels of exhaust fumes, the car’s intakes automatically close and then switch to air recirculation. All air, even if it’s being recirculated, passes through a multi-filter that minimizes levels of dust, pollen and other particles. An active charcoal filter reduces chemical and exhaust gas odors. The system even has an informative display that alerts you if the air quality deteriorates. All of this clean air magic starts as soon as you unlock the S90’s doors, as the ventilation fan switches on at high speed, expelling stale air within one minute. Never in all of my years of writing about automobiles have I spent so many words writing about an air quality system. But then again, there’s never been, until now, a Volvo S90.

Continuing the advanced technology theme, all current Volvos are powered by direct injection four-cylinder turbo engines, with varying power outputs. Additionally, some, like this S90, include a supercharger as well. The S90’s four delivers a strong 316 horsepower punch in “T6” trim. Look for plug-in hybrid power to complement the four-cylinder in the near future (S90 T8). Coupled with all-wheel drive, road dynamics are superior. Critics argue it’s no BMW 5 Series. Fine with me. It does not have to be because it’s a Volvo. The safety never went away, and now class-leading luxury is part of the equation.

Speaking of safety, it’s a Volvo, so rest assured all of the letters in the safety alphabet soup are present. ABS, DSC, TPMS are some we’re used to reading about. Volvo also has its Side Impact Safety System (SIPS) that uses airbags, air curtains, and strategically placed high-strength steels to protect the sides of your S90. WHIPS (whiplash protection system) means high-speed impacts to the rear can dramatically reduce the chance of neck injury. Other significant standard or optional S90 safety systems include “City Safety,” which can figure out whether there’s a collision risk when you’re approaching slower moving or stationary vehicles from behind, and if you fail to brake hard enough or in time, your S90 will brake for you. The S90 also sports pedestrian and large animal detection, such as deer and moose. Remember, Volvos are built in Sweden, where (like Canada) moose-car collisions are a fact of life. Ever seen a moose? They’re enormous animals and can cause fatal impact injuries. Steer assist technology, lane departure warnings and run-off road mitigation all help keep you on the beaten path. And should you become involved in an accident, the S90 has technology that will help limit serious injury or death. If a crash is deemed imminent, seatbelts automatically increase tension, and Volvo’s specially designed seat structure helps absorb energy to protect your spine from injury.

Volvo has a super ambitious goal of no deaths or serious injuries occurring on one of their vehicles by the year 2020. With the safety technology available in the entire Volvo lineup, much of which can be used for total autonomous operation, they are well on their way to achieving that goal.

Volvo plans to launch six more models in the next three years. Parent company Geely has spent more than $1 billion USD in retooling the Volvo lineup, and their investment is reaping dividends. I predict that by the time the next six models come to market, the Volvo name will be synonymous with all things safe and luxe when buying an automobile.
©(Copyright Canadian Auto Press)
Car Shopping Tools