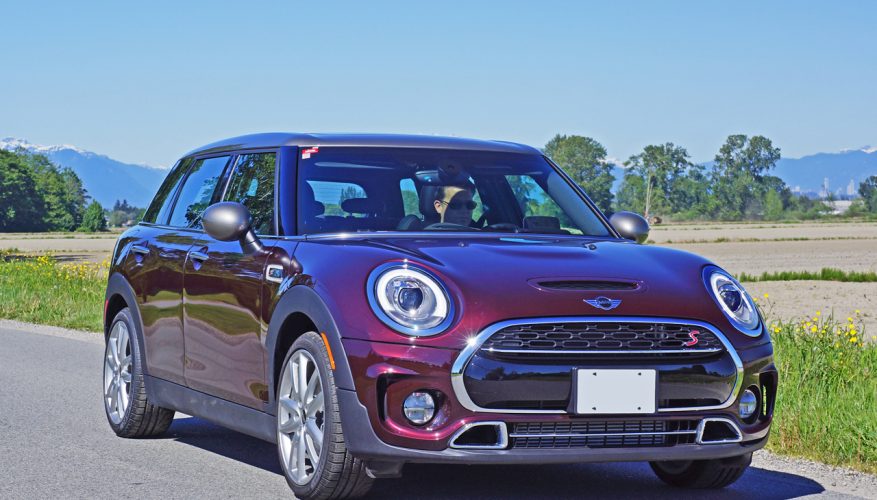 By: Trevor Hofmann
The Mini brand has long been grounded in a less is more philosophy, so simply living with one means you’re taking up less space in the world, in a car that consumed fewer materials in its production, goes through much less fuel than the majority of four-wheeled conveyances and concurrently spews fewer toxic emissions from its exhaust, but of course there’s more to the iconic British brand than that. Mini is also about having fun while you’re saving the planet, two concepts that rarely coexist.

The new Clubman is different, mind you, in that it embodies a more is more outlook. More size, more space, more Mini, if that makes any sense. All said, before we go thinking that Mini has become too big for its britches let’s put our reality glasses on and consider how the largest Mini ever fits into the small car market of today. As is immediately evident the Clubman is long, more than 25 centimeters (almost 10 inches) longer than the already lengthened 5 door hatch, which is based on a redesigned 3 door that’s longer and wider than the car it replaced and so on. Speaking of width, the Clubman is 9 cm (3.5 inches) wider than that same 5 door hatchback. Still, putting things into perspective it’s only 2.0 cm (0.8 inches) longer than a VW Golf 5-Door and 18.3 cm (7.2 inches) shorter than the Mazda3 Sport, which ideally ushers Mini into the smaller-sized portion of the much more popular compact car segment. In other words, while maxi for a Mini this Clubman is still a small car by today’s standards.

Where the outgoing Clubman was more of a niche player due to a funky albeit only slightly more useful reverse-hinged half-door added to the passenger’s side, giving the car three side doors, the new Clubman adds 30 cm (a foot) of length to that predecessor while getting four normal full-size side doors for easy access to all seating positions. This should make it similarly popular to the new 5 door, although it’s hard to say if its nonconformist Dutch-oven cargo doors will turn buyers on or cause them to pine for a common liftgate. After two weeks of use I didn’t experience any drawback, other than a lack of temporary shelter when raining and slightly awkward access when loading from curbside.

Where the Clubman expands ones preconceptions about Mini is in overall usefulness, the new model delivering considerably more rear seating space, at least for hips, shoulders, knees and feet, but headroom for those over six-feet might be a bit compromised. Cargo capacity wins big too with 495 litres (17.5 cubic feet) behind the rear seats (about the size of a full-size family sedan’s trunk) and a considerable 1,356 litres (47.9 cubes) when those 60/40-split seatbacks are folded forward, which is not only 170 litres (6 cubic feet) more hauling capacity than Mini’s own Countryman SUV but more max loading space than the much longer Mazda mentioned earlier.

This is all very good, plus as you may have already experienced with the current lineup of redesigned Minis, the rest of the car is terrific. It starts with a cabin that’s much improved for refinement thanks to more soft touch surfaces and a new driver layout that doesn’t depend as much on tradition for tradition’s sake, instead placing primary gauges right in front of the driver and leaving the circular centre stack for infotainment and HVAC components. The A-pillars remain fabric wrapped, there’s lots of glossy piano black lacquered trim all-round and the leather-wrapped and contrast stitched sport steering wheel is a cut above most anything else in the compact hatch segment, with a black and silver Union Jack on the lower spoke no less, while all of the car’s switchgear is well made and some of it even brilliantly retro, highlights being the chromed power window buttons and the two rows of chromed toggles, one set lining the overhead console for controlling various lights and the powered panoramic sunroof, and the other set for shutting down the auto start/stop system, stability control and forward-sensing crash protection functions, these surrounding a fab, far out, groovy, hip and ultimately cool bright red engine ignition toggle.

Other highlights include a dual-zone auto HVAC interface with colourful digital readouts integrated within each of its three chrome-rimmed and rubber-gripped dials, plus just above that the circular infotainment display noted a moment ago, mine filled to the brim with goodies like a back-up camera featuring active guidelines as well as special yellow and red warning graphics to let you know you’ve gone far enough (this is the best rearview camera I’ve ever tested), bright and clear navigation mapping with excellent route guidance, easy phone connectivity with Bluetooth audio streaming, and the list goes on and on, all integrated within a full-colour high-resolution display that’s as good as anything from the best premium brands, while its BMW iDrive-style rotating dial controller, complete with a touch pad on top that lets you use finger gestures to draw out words and more, is equally impressive.

The driver’s seat is fabulously comfortable, fully supportive and even includes extendable thigh support, while all seating positions were finished with solid leather bolsters and textured leather inserts that helped hold backside in place during hard cornering.

This sport-tuned Cooper S takes to those curves easily, as you may have guessed, its added wheelbase and width seeming to provide a new level of stability as speeds rise, the bigger car not as flickable as its smaller siblings yet feeling more planted on the highway. It’s quiet too, at least when compared to other Minis, the pumped up four-cylinder’s exhaust note easily audible and wind still noticeable, but the more substantive car certainly a more refined machine all-round.

That direct-injected and turbocharged engine makes the same power and torque as in other Mini models, the former rated at 189 and the latter at 207 lb-ft with the result to 100km/h being 7.2 seconds with the as-tested six-speed manual or 7.1 with the advanced paddle shifter enhanced eight-speed automatic, while for just $1,000 more you can upgrade the same engine with ALL4 AWD for a slight 0.2-second advantage off-the-line and of course much improved traction in inclement weather.

That brings up pricing, the Cooper S Clubman starting at $28,990 plus freight and dealer fees and the base 134 horsepower three-cylinder turbocharged model going for just $24,990. My tester seemed to include everything Mini could throw at it, as you may have noticed when I was running over the features a moment ago, but even though the options included its gorgeous Pure Burgundy metallic paint and continued on to add proximity access, an auto-dimming mirror, powered seats with driver’s side memory, rear parking sensors, a head-up display unit, navigation, Mini Connected smartphone syncing, leather upholstery and more, there was still much left on the options menu that could’ve been added. Anyone questioning whether Mini is targeting entry-level or premium buyers only needs to configure one on the brand’s recently updated website and it will quickly become apparent, with the price of my nicely outfitted tester topping $40k with freight, while spending time with one will drive that point home even clearer.

Back to driving, Sport mode made a dramatic difference to performance, the car taking off much quicker than when left in default Mid mode, whereas Green mode caused a sort of drug-induced lethargy, which I didn’t mind too much while touring around town as traffic in my part of the world almost always sucks the fun out of point A to B motoring.

The aforementioned auto start-stop no doubt helped achieve the Cooper S model’s impressive estimated fuel economy that’s five-cycle rated at 10.6 L/100km city, 7.4 highway and 9.2 combined with the manual or an even thriftier 9.7 city, 7.0 highway and 8.5 combined with the autobox, those two extra final gears really helping out when the road opens up. Of note, the base engine doesn’t really save you much at the pump unless going for the manual that’s rated at 9.5 city, 6.6 highway and 8.2 combined, because its optional automatic only has six forward gears and therefore ends up being less efficient overall than the DIY gearbox with estimated mileage of 9.4 city, 7.0 highway and 8.3 combined. Still, the base engine saves you money initially while delivering a robust 162 lb-ft of torque, which means it’s hardly a slouch.

While little third-party safety information has been collected on this new Clubman model the Mini brand earned a decent score in Consumer Reports’ 2016 report card on reliability, rated seventh out of 13 premium brands, which puts it ahead of Mercedes-Benz, Lincoln, Acura, Infiniti, Cadillac and Land Rover, or if comparing it to mainstream volume brands it does even better with a solid sixth place out of 16 brands.

Additionally, while the Clubman has yet to be crash tested by either the NHTSA or IIHS, the smaller Cooper 3 door achieved four stars out of five by the former institution, which is about average for subcompact hatchbacks, while the same 3 door earned an IIHS Top Safety Pick Plus rating when equipped with its optional front crash prevention equipment, so the larger Clubman should be similarly crashworthy.

You may have noticed I’ve had a difficult time finding fault with the new Cooper S Clubman. It embodies the brand’s respected quality, delivers superb driving dynamics, offers up ample powertrain and driveline possibilities, achieves impressive efficiencies, can be had with a fabulous array of feature sets, and maintains Mini’s classic British styling, albeit within a new bigger more accommodating six-door body that will no doubt win over many new customers who wouldn’t have considered the brand before. During the first five months of 2016 Mini Canada’s overall brand sales have grown by a significant 7.7 percent, which likely has much to do with the new Clubman. Will it play a major role in Mini’s expanding future? Only time will tell, but I’m betting it’ll be a big hit.
©(Copyright Canadian Auto Press)
Car Shopping Tools