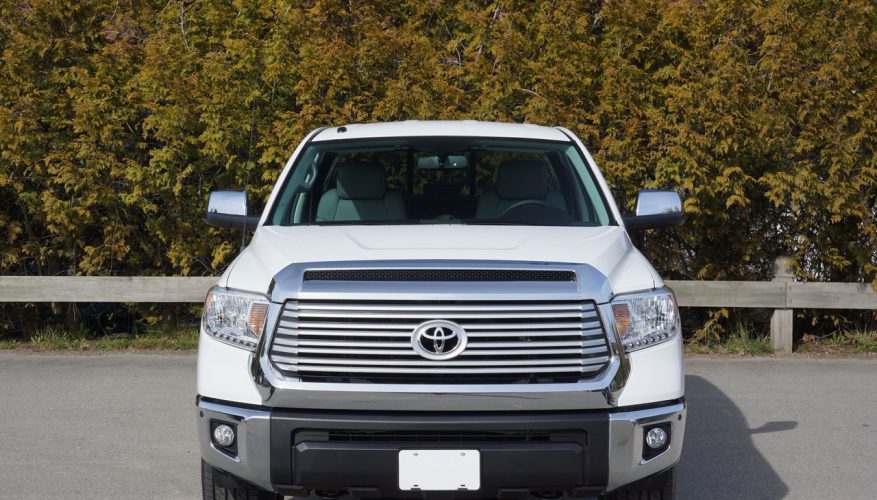 By: Trevor Hofmann
The idea of a luxury pickup would’ve been laughable decades ago, but not so anymore. Times change and today’s light truck buyer is much more varied in wants and needs than those who stepped up to half-ton haulers in the previous millennium. Now there are at least as many families looking to trucks like this premium-level Tundra Limited for solving their multidimensional lifestyle challenges in style and comfort, as there are commercial users choosing more basic Tundras for hauling construction equipment, farming implements, or whatever business requirements a heavy-duty workhorse can be used for, and for 9,769 consumers and commercial buyers last year the Tundra was the truck of choice.

The exact number of luxury trucks decked out in Limited or Platinum trim is not included in this figure, with many no doubt selling in base, SR and SR5 trim levels. What matters more to Toyota and its ever-watchful rivals is the considerable sales growth this truck has enjoyed since last year’s redesign, the aforementioned 2014 sales total having increased by 2,234 units from 2013. So, why did Tundra experience so much more volume last year, resulting in the second-best sales year since the model’s 1999 introduction? It’s difficult to be certain, but very likely the Tundra’s updated styling had something to do with it.

Just when you thought it wasn’t possible to make the Tundra look any tougher, Toyota went and gave this second-generation model a significant refresh for the 2014 model year with a much larger more intimidating grille ahead of a new raised hood. Additionally, the headlights received optional LED driving lights, while a new more rugged looking bumper was fitted just below. Bulkier looking front and rear fenders blend into new LED-infused taillights separated by a redesigned tailgate with an integrated spoiler on its topmost edge. To understand how thorough the mid-cycle update was, only the cab’s body panels went forward unchanged. The result is a beefy looking half-ton pickup truck with big rig styling cues that make any one of the Detroit 3 offerings look inadequate by comparison.

While many are wooed to a new vehicle by looks alone, the Tundra’s spec sheet makes clear that its tough and rugged appearance is an honest foreshadowing of its true capabilities. Suit it up with the optional 5.7-litre V8 and it’ll tow up to 4,760 kilos (10,500 lbs) and carry a maximum of 859 kilograms (1,895 lbs) on its backside, which is serious weight that most owners will never attempt, although two of the Big 3 competitors have now surpassed the Tundra’s capability with trailering ratings over 5,443 kg (12,000 lbs), and whether or not their owners every make use of this newfound capability, bragging rights matter a lot in this market.

For me, 4,760 kg (10,500 lbs) is good enough, my decision to purchase one brand over another swayed more strongly by off-road capability and reliability, the latter critical when umpteen kilometres deep into the wilderness. Toyota is highly respected for its 4×4 expertise, their Land Cruisers legendary, and as for reliability, no other brand has built a reputation so dependable. The Tundra gets a part-time four-wheel drive system that’s controllable via a dash-mounted rotating dial featuring 2H (two-wheel drive high), 4H or 4L settings, the latter for taking to the trail. I’ve done so in similarly equipped Tundras and the truck is effortlessly capable, its TripleTech frame maintaining rigidity no matter the terrain thanks to wide, fully boxed rails up front, a reinforced C-channel below the cab, and an open C-channel under the bed, elements that help out when towing and hauling as well. The suspension up front utilizes double A-arms and coil-over spring shocks, and the front-mounted steering rack makes for a tight turning circle, important when the way forward ends without notice and the need to go back where you came from becomes apparent.

Steering feel and overall responsiveness is good too, especially noticeable on pavement where the Tundra is much more agile than its bulky body suggests. Toyota mounts staggered gas shocks outboard of the springs in the rear, which help make damping more efficient and do a better job of keeping the truck’s back end from hopping around when empty, plus maintain a nice flat stance when carrying a load.

That 5.7-litre V8 I mentioned earlier is carryover from last year and years before, a well-proven powerhouse capable of 381 horsepower and 401 lb-ft of torque. Power off the line is impressive, while the sound of the big V8’s exhaust is positively intoxicating. A six-speed automatic comes standard in all Tundra models, and when mated to either engine delivers smooth, positive shifts. Along with its strong performance and impressive handling the Tundra includes serious stopping power via four-wheel disc brakes with ABS, electronic brake-force distribution and emergency brake assist, while traction and stability control are also part of the standard package.

I should mention that a 4.6-litre V8 with 310 horsepower and 327 lb-ft of torque comes standard, the previous base V6 relegated to the history books when the 2015 model arrived on the scene late last year. My Limited Tech trimmed model can only be had with the larger 5.7-litre V8 engine, my tester with the shorter Double Cab layout, and as noted, four-wheel drive.

The Tundra can be had in three body styles including a two-door Regular Cab in its most affordable form, an extremely accommodating CrewMax version at the top end, and this Double Cab splitting the difference. Both four-door models benefit from front-hinged rear access, annoying clamshell doors left to a less convenient past. I’ve commented on trims in the beginning of this review, but being that I covered the 4.6-litre V8 in a previous review I won’t go into detail about features in base, SR and SR5 models, or for that matter the CrewMax Platinum model I covered last year.

Along with these nice extras my tester included all of the regular Limited model’s features too, such as heated front seats, the driver’s which is eight-way powered including lumbar support and covered with leather, as were the other four positions and the steering wheel. That four-spoke multifunction steering wheel gets a telescoping column added to lesser trims’ tilt capability, while the Limited model also gets an auto-dimming rearview mirror with an integrated compass, dual illuminated vanity mirrors, front auto up/down powered windows, a power sliding rear window, dual-zone automatic climate control, clearance and reverse sensors, a front centre console box, a garage door opener, woodgrain trim, soft-touch instrument panel detailing, soft door uppers, silver dash trim, chrome vent trim, and more.

This last list of items is exclusive to the Limited, but my tester also came with a host of features pulled up from lower trims such as a nice 3.5-inch TFT multi-information display ahead of the driver, a seven-inch touchscreen infotainment display atop the centre stack with an integrated reverse camera system, advanced voice recognition, seven-speaker AM/FM/CD/MP3/WMA/satellite audio with aux and USB ports plus Bluetooth hands-free phone and streaming capability, silver painted inner door handles, footwell lighting, carpeting, carpeted and all-season floor mats, rear privacy glass, a 60/40-split rear bench seat with storage underneath, and much more.

While all of these features are impressive in a truck that’s not even top of the line, it’s the way everything is put together and the overall design of the cabin that makes the Tundra Limited shine. As is normal even within the luxury truck segment some hard plastic is used inside, but with the Tundra it’s nicely textured matte finished surfacing on the very top of the dash and lower instrument panel, plus the front portions of the door uppers and lower door panels. Running horizontally across the middle portion of the instrument panel, starting from the left of the steering wheel and visually connecting directly ahead of the front passenger, is a luxuriously padded and contrast stitched leather-like embellishment that echoes the same padded pieces running along the aft portion of the door uppers, where your elbow is more likely to rest, adding richness to the Tundra Limited’s cabin. The rear doors have the same gray looking portion, but it’s hard plastic.

Some glossy faux woodgrain stretches across the IP just above the driver’s knees and just below that leatherette panel ahead of the front passenger, while Toyota adds artistic flair by directly mirroring the satin-silver aluminum-look steering wheel spokes on the centre stack, each side bookended by satin-silver garnishes identical in shape if not size. The Tundra Limited gets the same satin-silver treatment on the lower console and elsewhere in the cabin, while the surface surrounding the infotainment screen and HVAC interface is done out in an upscale grey metal-like treatment that I dubbed “industrial chic” in my notes.

All the switchgear is large and easy to use with gloves, while the aforementioned 2H/4H/4L drivetrain selector dial gets a nice rubberized rim. The shift lever is satin-silver on top and leather around the back for a nice grip, while the centre armrest is also leather-covered and ultra-wide, covering a large storage bin hidden below.

Speaking of large, my Limited tester’s leather-clad seats are mega-sized, ultra-accommodating and wonderfully comfortable up front, while the rear of this Double Cab model isn’t quite as voluminous, but it’s ideal for smaller adults or kids. Larger folks can climb in too, but I’d only recommend this for shorter drives. Of course, there’s the CrewMax cab boasting limousine-like rear seating for those who need it, so upgrade if required.

Move around the back, let down the tailgate and it softly settles without a sound, a nice bit of Toyota refinement when compared to some other tailgates in the class that still drop like proverbial rocks resulting in a loud metallic whack. While this is nice, I’d even be more impressed if Toyota offered a convenient way to climb inside when that tailgate is lowered. Others in the class include handy steps integrated within each corner of the rear bumper, while one even offers a pullout step hidden inside the tailgate itself. In this respect, the Tundra lags behind.

That this is my only complaint is a good sign mind you, as the rest of my 2015 Tundra Double Cab 5.7 Limited Tech 4×4 was plenty impressive with a level of luxury I couldn’t have dreamed of in my younger years, back when dad finally gave up on his domestic pickups due to problem after frustrating problem and service that was worse, finally switching to a first-generation Tundra which was a decision he never regretted.

With owner satisfaction ratings high and a bold new look that’s more enticing than ever the new Tundra might be a good choice for you too.
©(Copyright Canadian Auto Press)
Car Shopping Tools