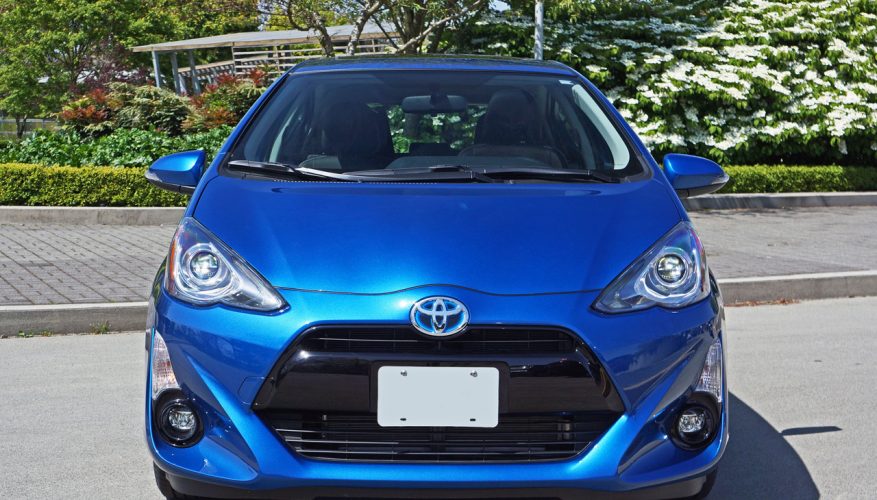 By: Trevor Hofmann
No matter which angle you see it, whether coming or silently whisking past on EV power, the Prius C is a great looking little hatchback. It rides on Toyota’s B platform that also underpins the Yaris and current Corolla, but visually you’d never know it.

The Prius C is wholly distinctive, made even more so for 2015 thanks to sportier new front end styling that adds a larger looking all-black grille with a glossy black bumper cap, integrated LED headlamps at each side, new vertical LED driving lights with tiny gloss black rimmed LED fog lamps just below, and a much more aggressively shaped lower fascia, along with a less obviously updated rear end design featuring a sizable rear spoiler up top and revised taillight lenses with integrated LED brake lights wrapped around each corner just below.

Yes, you heard me right. Just like the aforementioned Corolla this latest entry-level Prius, the most affordable hybrid model on the new vehicle market, comes standard with lighter yet brighter LED headlights to improve nighttime visibility and safety, a feature you don’t normally see in the mainstream volume sector at all, let alone amongst lower end compact cars.

It makes sense for one of the industry’s highest tech cars to be kitted out with state-of-the-art gear, this electromechanical wonder also enhanced with Toyota’s slick new 6.1-inch display audio system as standard equipment for 2015. Last year’s four-speaker AM/FM/CD audio system with aux and USB inputs plus Bluetooth capability worked well enough, but it wouldn’t fit into today’s big screen world. No such issues with the latest Prius C, the new touchscreen interface ideal for the high-resolution full-colour tablet generation, while the carryover 3.5-inch LCD multi-information display continues to deliver real-time hybrid energy flow animations and more via a flick of the thumb on the standard multifunctional steering wheel spoke’s switchgear. The steering wheel controls actuate audio, phone and voice recognition functions too, but what’s truly unique is the ability to change the standard automatic climate control system’s settings without taking your eyes off the road.

And yes, I’m still not talking about option packages, but rather the base car. Additional standard items include the usual remote keyless entry, powered windows, power-adjustable and heatable mirrors, tilt and telescopic steering, intermittent wipers front and back, cabin air filtration, rear seat heater ducts, four-speaker AM/FM/CD/MP3/WMA audio with a USB plug, ABS, electronic brake-force distribution, emergency brake assist, vehicle stability control, traction control, and Toyota’s exclusive Smart Stop Technology (SST) that reduces power to the engine when braking, plus of course a full bevy of airbags including one for the driver’s knees.

All of these standard features come in a car with a very nicely laid out interior featuring a nice soft-touch synthetic pad ahead of the front passenger, comfortable leather-like armrests, and high-quality harder textured plastics covering most other surfaces, all of which fit together extremely well. Piano black lacquered surfaces and satin-silver finish metallic detailing highlight the HVAC interface and window switch panels, while bits of chrome are here and there for added effect, although my favourite Prius visual remains the electric blue gearshift knob garnish that spiritually matches the power button and blue accented exterior emblems. Toyota chose blue for an icon colour in the infotainment system too, a nice touch.

You can up the ante from the Prius C’s $21,055 base price by choosing a $650 Upgrade package that adds cruise control to those steering wheel controls, plus a really nice padded synthetic leather instrument panel, two more speakers for the audio system, variable intermittent wipers, premium cloth upholstery, driver’s seat cushion height and vertical headrest adjustments, a front passenger rear seatback pocket, a rear centre console box, 60/40 split-folding rear seatbacks, as well as a tonneau cover for hiding valuable cargo, and while all of these features made my tester a more enjoyable, comfortable companion, it was the $5,000 Tech package that turned it from a really good mainstream hatchback to a near-premium compact.

While the aforementioned LED fog lamps and 15-inch seven-spoke alloys on 175/65R15 Goodyear Assurance low rolling resistance all-seasons enhance the exterior styling before even sliding inside, its probably the Tech package’s leather-like SofTex upholstery that really sets it apart. SofTex is Toyota’s proprietary leatherette, but it’s much more than just a faux pleather designed to imitate real hides. Toyota claims the thermoplastic polyurethane material provides better breathability and thermal qualities than vinyl, stating it’s up to 10°C (18°F) cooler than similar upholsteries due to its infrared reflective capability. It also has a more realistic feel, while reducing our dependence on the bovine business that contributes to methane gas emissions.

Toyota follows this greener solution up with a similarly enviro-friendly synthetic leather-wrapped steering wheel, while along with almost everything the Upgrade package includes except those items made redundant, the Tech package also adds proximity-sensing access with pushbutton ignition, heatable front seats, a powered moonroof with a sunshade, and upgrades to the infotainment system such as navigation, a reverse camera, satellite radio, SMS- and email-to-speech functionality, advanced voice recognition, phonebook and streaming audio via Bluetooth, plus the display of artist, song and album art for a connected iPod/iPhone thanks to Gracenotes, while touch tracer steering wheel controls throw a duplicate image of the steering spoke-mounted control you’re touching up on the multifunction display so you don’t need to look down at the actual button to complete a given task, allowing safer actuation of functions while your eyes are at least focusing closer to the windshield and the road ahead.

If you’ve never driven a hybrid you might not realize that the addition of electric propulsion not only reduces fuel consumption but also increases the fun factor. The Prius C won’t exactly be chasing down the latest crop of hot hatches with just 99 net horsepower and 82 lb-ft of torque, but that twist arrives in full almost immediately upon takeoff and speed ramps up quickly, the continuously variable transmission not requiring hesitations between shifts but instead producing nice, even acceleration. The gasoline portion of the powertrain is a 1.5-litre Atkinson-cycle four-cylinder, this design chosen long ago for efficiency ahead of performance due to the electric motor’s considerable contribution.

While the Prius C moves along briskly enough to put a smile on the face, I got more grins from eking out the best fuel economy possible when either in Eco mode or, better yet, the wonderfully silent EV mode I brushed past earlier. An exhaust heat recovery system works away without driver input and an auto start-stop system shuts the engine down when it would otherwise be idling, yet you can make a big difference in available battery power if you slow to stops gradually instead of abruptly so as to get more kinetic charge from the regenerative braking system. More battery power results in greater EV range, which for me added up to 30-percent of total city driving, or at least this is what the car’s multi-information display noted. I was also able to see battery depletion on the MID, plus a nice real-time graph showing how the battery was being charged in Eco or default modes, and interesting detail about fuel cost from start, which was a whole 42 cents since the previous voyage across town.

Canada’s new five-cycle EnerGuide fuel economy testing process results in a 4.5 city, 5.1 highway and 4.8 combined rating, which is otherworldly even within its subcompact hatchback crowd and much appreciated where I live in Vancouver now that pump prices are higher than they were prior to the significant drop in the price of oil per barrel experienced earlier this year; it’s hovering just above $60 per barrel now from more than $100 less than a year ago, which makes my local price of almost $1.40 per litre for regular unleaded literal highway robbery, albeit maybe a good time to hedge your losses by picking up some Canadian oil producer stock.

While you may not enjoy my dark sense of tar sands humour, you’ll likely have fun behind the Prius C’s wheel. As mentioned in the beginning of this review, the Toyota’s smallest hybrid shares underpinnings with the Yaris and new Corolla, which means that it’s a formidable handler when straight turns to curve. There’s nothing particularly exotic under the metal, with MacPherson struts and a stabilizer bar up front and a torsion beam setup in the rear, but this proven configuration combines with a relatively low curb weight of 1,132 kilos (2,500 lbs), much of which is situated very low for an improved centre of gravity, for a level of deft agility that might surprise you.

Likewise for its cargo carrying capacity. While many hybrids rob storage space to pay for battery stowage, the Prius C delivers a very useful 484 litres (17.1 cubic feet) of gear toting volume behind the rear seatbacks, which ironically is more than the Yaris offers, not to mention others within the subcompact segment including the Ford Fiesta, Kia Rio, Mazda2, and the list goes on. What’s more, the rear seats are plenty spacious with lots of headroom thanks to a cutout in the ceiling.

Practical, stingy on fuel, fun to drive and now more stylish than ever, especially in my tester’s Blue Streak Metallic paint which is just one of six no-cost paint options that include Classic Silver Metallic, Magnetic Grey Metallic, Electric Lime Metallic, Black Sand Pearl and Absolutely Red, while $255 will buy you a nearly green white dubbed Moonglow or my personal favourite Tangerine Splash Pearl, the Prius C continues to deliver big value in an environmentally friendly hybrid package. It’s the HEV almost any working person can afford, and certainly worthy of consideration even if you haven’t put a hybrid on your list.
©(Copyright Canadian Auto Press)
Car Shopping Tools