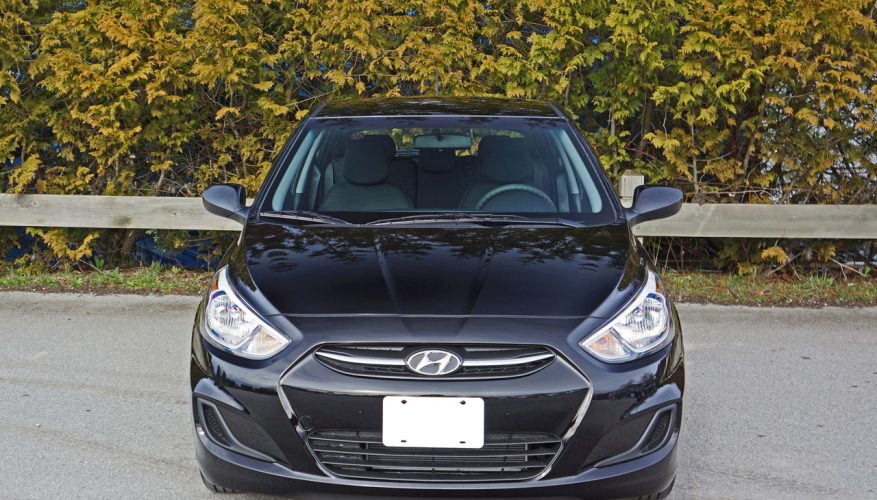 By: Trevor Hofmann
What’s the most basic new car very little money can buy you? It’s not Hyundai’s Accent Hatchback L. Don’t get me wrong, as it doesn’t take much money to drive away from any Hyundai dealer in the Korean brand’s least expensive Canadian offering, but it’s not as basic as you might think.

For a tidy $13,599 plus $1,595 in freight and pre-delivery prep fees you can own a 2015 Hyundai Accent Hatchback L model, or at least that’s the manufacturer suggested list price. Look a little farther down the page dedicated to the car on the automaker’s retail website and you’ll see a red highlighted no-haggle discount of $4,232 that makes the subcompact Accent Hatchback available for a mere $9,367! Yes, that’s significantly less than the much more basic $9,998 Mitsubishi Mirage or Nissan Micra, both smaller, less powerful cars than the Accent Hatchback, not to mention much more frugally equipped. This is such a no-contest fight that it’s practically unfair.

No doubt Hyundai has been losing sales to the cheapo Mitsubishi and Nissan since the latter micro car hit the market for less than $10k and the former followed suit just to stay alive. To be clear, the Mirage’s $9,998 starting price is an actual mirage, its real base MSRP set to $12,498 plus freight. They’ve made the aforementioned adjustment to keep the car competitive, in similar fashion to how Hyundai has reacted recently. The differences between the Mirage, Micra and Accent, however, are massive.

Starting at the heart of any car, the Accent Hatchback L’s engine is a state-of-the-art direct-injection 1.6-litre four-cylinder making 138 horsepower and 123 lb-ft of torque. It comes mated to a six-speed manual while all the go-fast power is harnessed by four-wheel disc brakes. The base Mirage will cost you more yet only offers up a comparative apparition of performance due to a 74 horsepower 1.2-litre three-cylinder under-hood that’s shifted via a five-speed manual and utilizes rear drum brakes to slow down (not that it gets going fast enough to warrant rear discs), whereas the Micra’s 109 horsepower 1.6-litre four-cylinder is also one cog down on the Accent with only five forward gears and its rear brakes are less binding due to drums instead of discs. (Score: 3 – 0 for the Accent, but we’re only scratching the surface).

The Accent Hatchback’s most obvious benefit is size, the curvaceous model fitting into the larger subcompact segment rather than the city car class. The Mirage and Micra measure 3,827 millimetres (150.7 inches) and 3,780 mm (148.8 inches) respectively, while both ride on identical 2,450-mm (96.5-inch) wheelbases. The Accent Hatchback’s length and wheelbase measurements are 4,115 and 2,570 millimeters (162.0 and 101.2 inches) respectively, significantly larger than its sub-$10k competitors, while its 1,700-mm (66.9-inch) width makes it exactly 35 mm (1.4 inches) wider than both micro cars, all resulting in more passenger room and a lot more cargo capacity, the Accent Hatchback capable of hauling 600 litres (21.2 cubic feet) when the rear seats are in use and 1,345 litres (47.5 cubic feet) when the standard 60/40 split seatbacks are folded down. Both smaller cars get 60/40-split rear seatbacks too, but stowage behind the rear seats is comparatively minimal with 487 litres (17.2 cubic feet) of capacity in the Mirage and a mere 408 litres (14.4 cubic feet) of equivalent space in the Micra, whereas the slightly larger Mitsubishi can manage almost as much gear as the Accent with 1,331 litres (47.0 cubic feet) of space available when both seatbacks are flipped forward, which is a whole lotta luggage more than the wee Nissan’s 820 litres (28.9 cubic feet) maximum. (Score: 5 – 0 for Hyundai).

Inside, all of these cars are back to basics throwbacks, although a big differentiator with the Accent Hatchback L occurs even before sliding into the driver’s seat, Hyundai’s offering standard with power door locks. You’ll still need to slot the key into the door to gain access, but that action will open and/or lock all doors, whereas the Mirage and Micra will have you walking around the car to check each door, opening, locking and closing along the way. The little Mitsubishi one-ups its rivals with powered front windows, those in the rear requiring manual operation just like all four in the Accent and Micra, but I didn’t mind putting a little muscle into this menial task during my test drive and would probably enjoy every turn if it meant saving so much money.

Yes, in order to get under the $10k threshold you must take any of these base cars as is. As soon as you add a single option, such remote access, powered windows all-round, air conditioning or even an automatic transmission, the price increases by thousands. The Micra, for instance, doesn’t even have vanity mirrors under the sunvisors. Instead you’ll need to pay $14,698 to look at yourself at stoplights, while also getting powered locks, powered windows, air conditioning and an automatic CVT. The Mirage? It’ll cost you close to $15k so equipped, but includes an antiquated four-speed autobox. The Accent Hatchback LE auto adds a sophisticated six-speed automatic transmission, remote start and air conditioning (except powered windows – they’re another level up) for $15,415 with the no-haggle discount, slightly more than the other two yet a much better car in every way, while I haven’t even mentioned some of the other items the base L model includes that get grandfathered up to the LE, such as driver’s seat height adjustment, AM/FM/CD/MP3 display audio with USB and iPod integration, sliding sunvisors, body-colour door handles and mirror caps, a rear spoiler, active front headrests, Vehicle Stability Management (VSM) to go along with its electronic stability control and traction control, and the list goes on. Yes, these are all on the base Accent Hatchback L that I drove. (Score: I’m losing count, but we should give the two competitors a point for standard and optional powered windows at the $15k price point).

Yet it’s the mechanicals of the larger Accent that truly set it apart. The six-speed manual and direct-injected engine combination is not only impressive for the sub-$10k set, but they’re a powerful combo in the more expensive compact class too. The same goes for disc brakes in the rear. The only compact competitor to offer rear rotors in standard trim is the Kia Rio, which incidentally is a car based on the Accent from a company owned by Hyundai. The result is a driving experience that far outclasses the smaller city cars being compared here, with loads of power off the line, ample passing performance, comfortable and confidence-inspiring highway cruising and impressive high-speed handling through the curves, plus of course best in class braking, the base Accent Hatchback L only needing a set of aftermarket alloy rims to make it qualify for hot hatch status.

What’s possibly more impressive is that the Accent’s advanced drivetrain actually makes it slightly more efficient than the much smaller Micra, this most basic Hyundai achieving a five-cycle EnerGuide rating of 8.7 L/100km in the city and 6.3 on the highway, the Nissan a bit better in the city at 8.6 yet thirstier on the highway at 6.6. Of course, the Mirage’s anemic powerplant is the stingiest on fuel at just 7.0 city and 5.5 highway, but in my experience the tradeoff isn’t worth it, and besides you’ll more than make up the difference with the Accent Hatchback L’s $631 in immediate discounted savings.

I’ve mentioned the manual windows, items that truly take me back to my younger years, and along the same vein I can’t remember the last time I asked my partner for help adjusting the right side mirror (something I remember helping my mom and dad do throughout my childhood), but the stock radios in the cars of my day never included an FM band let alone the impressive sound quality that today’s standard audio systems deliver. Instead the centre dashboard-mounted speaker in my mom’s ’76 Chevy Malibu buzzed violently whenever I turned up to the volume to hear a favourite song. The Accent’s four-speaker stereo is in another universe compared to those old mono-speaker domestics my mom always preferred¬ – my dad’s Blaupunkt infused VWs weren’t much better, but at least the interfaces looked cool.

Not as sweet looking as the base Accent’s faceplate, mind you. With a full LCD display surrounded by myriad buttons for controlling all of its features, it’s very upscale for the sub-$10k category let alone competitors costing thousands more. Additionally, ahead of the driver is a nice large two-dial gauge package with a useful multi-information display at centre. The steering wheel is devoid of buttons, which would also remind me of the good old days if it weren’t for its nice four-spoke aluminum trimmed design and thick, meaty rim. The centre stack surround, the trim around the shift lever, and the interior door handles are finished in the same satin silver surfacing, the latter items new for 2015.

The seat fabric is also new this year, with black woven sides and bolsters along with a darker black-patterned insert featuring attractive blue thread sewn in an intricate wavy pattern. It looks great, and much classier than anything else I’ve seen in the entry-level segments.

These are just some of the reasons the Accent is by far the sales leader in its subcompact class, let alone amongst the city cars it’s now priced against. Last year more than 23,000 Hyundai Accents were sold in Canada, which more than doubles the majority of its Japanese and domestic competitors. The Accent Hatchback L model’s aggressive new pricing will make sure that it stays number one, while giving first time new car buyers and savvy old timers what is easily the best four-wheel value on the road today.
©(Copyright Canadian Auto Press)
Car Shopping Tools