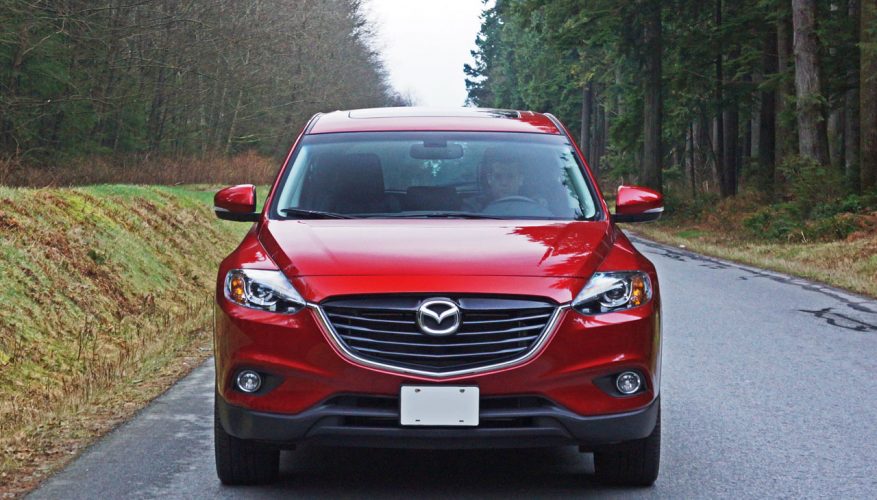 By: Trevor Hofmann
Let’s be completely honest. Other than its MX-5 roadster and RX-7/8 sports cars Mazda hasn’t always had leading-edge design, but all that’s changed now. Its current 3 sedan and hatchback are two of the best looking in their class, its mid-size 6 sedan is downright gorgeous, the compact CX-5 crossover is a real looker as well, while the Zeal Red Mica painted CX-9 I’m reviewing here is a certified head-turner.

The CX-9 was the first production vehicle to receive Mazda’s new "KODO – Soul of Motion" design language, a styling direction that’s won kudos from us pundits as well as customers alike, the latter that have been responding with their hard earned money. When it arrived in 2012 as a 2013 model, the newly penned CX-9 increased Mazda’s percentage of the mid-size CUV segment considerably, and sales have been steadily climbing ever since. It’s far from the brand’s bestseller, the compact 3 handily taking that title with the CX-5 selling less than half as many units in Canada yet still managing second, but the CX-9 plays an important role as the brand’s crossover SUV flagship.

It rides on the same chassis architecture as the 6 sedan, a platform that reaches way back to a time when Mazda co-developed a lot of its cars, SUVs and trucks (the latter of which it no longer offers) with Ford Motor Company. Mazda and Ford chose to go their separate ways in late 2009 and now all we have left as a reminder of their 40-year relationship is the current 6 and CX-9, both models still riding on variations of the Ford CD3 platform that also underpins the Ford Edge mid-size crossover, Fusion mid-size sedan, Lincoln MKX and MKZ models, while its sole powertrain remains a Ford Cyclone V6 design that’s redubbed MZI 3.7 in Mazda-speak, although this engine is actually produced in Hiroshima, Japan as is the entire CX-9. It might sound like a mixed bag of cross-culture parentage, but in essence it was a very effective interracial relationship that benefited both companies and produced vehicles, like the CX-9, that held up to the two brands’ core values.

The result is a mid-size crossover SUV that looks like a Mazda, feels like a Mazda and comes pretty close to driving like a Mazda, although that last point isn’t really fair as all the other Mazdas I’ve ever driven are smaller, lighter and therefore more nimble than this seven-passenger family hauler. Let’s just say that time spent behind the wheel of this CX-9 GT was enjoyable compared to some of its mid-size CUV rivals when it comes to straight-line acceleration, ride quality, handling and other driving dynamic elements, not to mention interior design.

Then again, as far as creature comforts, convenience features and interior materials quality go, this SUV doesn’t quite measure up to newer Mazda models created since the CX-9’s 2013 redesign. The Mazda3, Mazda5 and Mazda6 that have come since have bypassed the CX-9 in some areas, such as their inclusion of soft-touch dash tops and class-leading infotainment interfaces, but such advancements are normal within any brand and Mazda’s largest will no doubt catch up in short order. In many other ways the CX-9 makes the smaller Mazda models look like the entry-level vehicles they are, which is as it should be with a pricier model in its top-level trim.

My 2015 Mazda CX-9 tester was kitted out in fully loaded GT guise, which meant that the aforementioned infotainment system, which measures 5.8 inches across, was infused with voice-activated navigation as well as a superb sounding 10-speaker Bose audio system with AudioPilot noise compensation technology, Centerpoint surround sound and satellite radio with a six-month subscription, plus when the standard rearview camera came into view after selecting reverse, the door mirrors also tilted downwards to protect the upgraded 20-inch 10-spoke alloys against potential curbside destruction, while rear parking sensors simultaneously warned of potential rearward obstacles. Yet these few features are just scratching the surface of the GT upgrade, this top-line model also getting bright ring finished HID headlamps boasting LED daytime running lights, a sporty set of simple circular fogs, turn signals integrated into the side mirror caps, chromed exterior door handles and a silver-finished tailgate garnish.

While the dash top was hard plastic, similar to others in the class and even some premium crossovers (Infiniti’s QX60 comes to mind), the front and rear door uppers were nicely padded in a softer synthetic for an upscale look and feel, while the suede door inserts I just mentioned were almost as plush as the perforated leather and suede enhanced seats that were some of the nicest I’ve ever seen or experienced in the non-premium mainstream sector. They’re stitched together with racy red thread to boot, a treatment that I would have loved to see elsewhere in the cabin, but the more subtle use of black stitching on the steering wheel and armrests looked good too.

As far as the convenience technology goes, the CX-9 doesn’t work quite the same way as the top-line 3 Sport GT and CX-5 GT that I just finished testing. For instance, when you walk up to the back of the CX-9 with the smart key in your pocket it doesn’t automatically unlock when you tug on the liftgate handle, but rather requires you to first press a hidden button about six inches to the right, which unlocks the car, and then tug on the aforementioned handle to open the hatch, a two-step process that seems a bit unnecessary. Additionally, the liftgate is powered but you’ll need to use the remote to lift it when outside, as pushing the rubber button and/or lifting the hatch does nothing, effectively negating the usual helpfulness of proximity sensing access when loaded down with groceries or what-have-you. What’s more, when walking away from the CX-9 after arriving at your destination it doesn’t automatically lock behind you like the other two less expensive Mazdas, likely a sign of newer tech being offered on more recently redesigned models, such as the infotainment system I mentioned before.

On that last note, the infotainment system includes SMS-to-speech for your smartphone, which never worked once with my recently purchased Sony Z2. I wish that were the worst of the hands-free problems, but the sound quality of the speaker system, which works so well for music, was difficult to hear clearly with my phone. It doesn’t seem to differentiate between music and phone calls, so therefore the voice of the person you’re trying to listen to gets overly affected by bass tones instead of the usual thin and crisp AM radio talk show sound that most competitive systems deliver.

Also disappointing were front seat heaters that didn’t warm up enough to be noticeable, even on their highest settings, while no rear seat heaters were available either (not that it would’ve matter if they worked like those up front). Additionally, the auto up/down powered windows only worked up front, there was no panoramic sunroof option, and while the seat inserts were perforated no forced ventilation was offered. These might sound like premium features, but many of the CX-9’s volume branded competitors offer these luxury items.

As I said before, the CX-9 GT’s seats were very comfortable and there’s ample room up front and in the second row for all body types, while the rearmost third row was actually large enough for my five-foot-eight frame after sliding the centre row forward a few inches, leaving about two inches ahead of my knees and the same above my head.

The second-row seats feature a two-way folding mechanism, the lever at the top used for sliding them out of the way in order to access the third row and alternatively the side lever dropping the seatback down for extra cargo space. The second-row headrests don’t flip forward as conveniently as those in the third row do, so you may need to slide the seat bottoms rearward before folding them down and/or slide the front row seats forward. When laid flat the CX-9 offers up 2,851 litres (100.7 cubic feet) of cargo space, which is sizable indeed, while there’s a very usable 487 litres (17.2 cubic feet) available behind the third row.

Where some of the CX-9’s competitors offer multiple engine configurations and even optional hybrid drivetrains, Mazda’s largest makes do with a sole 3.7-litre, DOHC, 24-valve V6 that’s capable of 273 horsepower and 270 lb-ft of torque. This is a nice smooth powerplant that feeds its energy through an equally silken six-speed automatic with manual mode, but unlike other GT’s within Mazda’s lineup don’t go looking for paddle shifters to swap its cogs. That job will need to be executed via the shift lever, and when done so the engine responds well with loads of ready and willing twist for spirited acceleration plus oodles of passing performance. Likewise the CX-9’s fully independent suspension with stabilizer bars at each end enjoys being powered through long sweeping corners and even tossed into tighter curves, the big meaty 245/50R20 all-seasons that come standard with the GT capable of biting deep into tarmac for excellent grip whereas the active torque-split all-wheel drive system provided tenacious traction no matter the road conditions.

Of course, an effective electronic traction control system and dynamic stability control comes standard on all CX-9s, as do four-wheel discs with ABS and electronic brake-force distribution, roll-over stability control, and the usual assortment of airbags, but no front knee blockers or rear side-impact airbags are included like some of its competitors.

What the CX-9 and all 2015 Mazdas have over any rival is a three-year, unlimited mileage comprehensive warranty, plus an additional two years of powertrain warranty, so if you’re the kind of person who drives a great deal, this is the CUV for you.

In the end, while the CX-9 doesn’t offer some of the same standard and optional features as some of its more recently revised rivals and my tester’s standard gear didn’t always work as advertised, its a great looking crossover SUV that drives very well, has an absolutely stunning set of top-line seats, and a larger third row than some competitors, while the discount I mentioned certainly makes the CX-9 worthy of a closer look.
©(Copyright Canadian Auto Press)
Car Shopping Tools