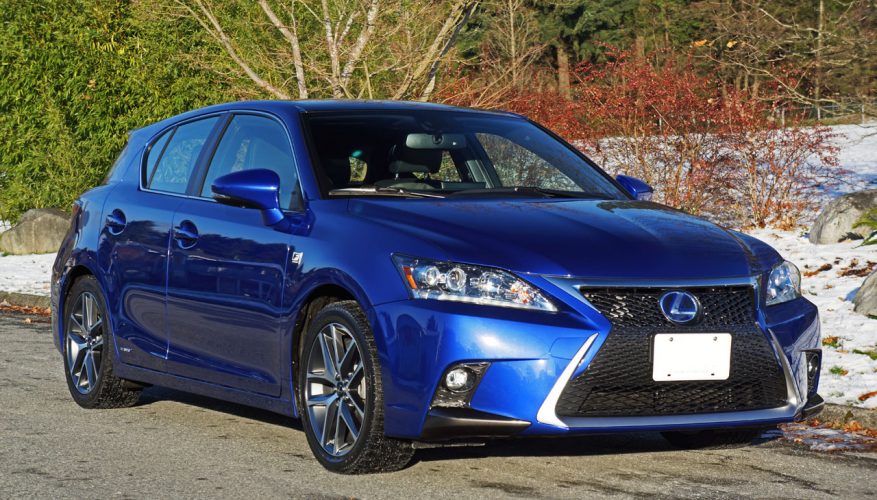 By: Trevor Hofmann
Last year the CT 200h received Lexus’ new trademark spindle grille, and the resultant new look is so strong, so unique, so definitive, so undeniably Lexus that the entire car looks reshaped and ultimately reborn.

My 2014 CT 200h tester was in Premium trim, two positions up from base, while this time around I’m back in top-line F Sport trim. The last time I covered a CT 200h F Sport was 2012, and after reviewing the old photos it looks decidedly bland in comparison this new 2015 version, despite being coated in the same F Sport-exclusive Ultrasonic Blue Mica paint. Adding the new spindle grille made the CT’s update more of an extreme facelift than just a mid-cycle makeover, at least up front. The car’s rear end design as updated too, albeit more subtly, but truly it didn’t need as much of a redesign as it’s always been appealing in a hunkered down sporty way.

Although a five-door hatchback, or Sportback as Lexus likes to define it, this long, low and lean body style is actually the Japanese luxury brand’s entry-level model. Some rivals offer more traditional four-door sedans, a layout that’s especially popular south of the border, but here in Canada five-door models suit our active lifestyles better.

In another twist, Lexus’ least expensive model is also a dedicated hybrid. That means there’s no conventionally powered CT alternative, so you get the performance, fuel-efficiency and environmental benefits of an HEV at a lower price than almost every regularly powered premium-badged competitor. Essentially, the CT 200h is a Toyota Prius under its totally unique skin. Both cars ride on updated versions of Toyota’s MC platform architecture, and both use Toyota’s legendary Hybrid Synergy Drive gasoline-electric powertrain (although it’s called Lexus Hybrid Drive in this application), complete with its 1.8-litre, DOHC, 16-valve Atkinson-cycle four-cylinder engine incorporating variable valve timing “with Intelligence” (VVT-i) on the exhaust cam, 60-kW electric motor fed by a 201.6-volt sealed NiMH battery, continuously variable transmission, idle-stop technology, regenerative braking system, exhaust heat recovery system, and other advanced efficiency and environmental technologies. On its own the gasoline portion of this hybrid combo only puts out 98 horsepower and 105 lb-ft of torque, but together with the electric motor and battery duo, a total of 134 horsepower and 153 lb-ft of torque are sent down to the front wheels.

I won’t go so far as to say the CT’s performance is “electrifying” (even though technically it is), but turn the rotating drive mode selector on the centre console to its rightmost position to engage Sport mode and it sends a lot more instantaneously responding torque to the front wheels, resulting in launches from standstill that truly really quick.

While delivering a firm yet comfortable ride the CT is also a good handler, especially in F Sport trim that adds a full set of performance dampers to the car’s standard independent MacPherson strut front and double-wishbone rear suspension setup with stabilizer bars at both ends, not to mention good old rack and pinion steering pointing the way for its 17-inch alloys on 215/45R17 all-season tires.

F Sport is more about style than go-fast upgrades, however, these tires identical to those used with all trims but the base model that gets 16s. Circling them is a unique and gorgeous set of 17-inch twin five-spoke alloys with this top-tier model. Additional F Sport kit includes special black mesh front grille and a larger rear rooftop spoiler, plus inside is a unique three-spoke steering wheel that wears the F Sport logo on the bottom centre position, plus F Sport black leather seats with light grey stitching to match the same on the leather-clad steering wheel, as well as F Sport doorsill scuff plates. Additional F Sport goodies include great looking aluminum sport pedals with rubber inserts and equally appealing metallic silver interior trim, while this model also includes voice-activated navigation plus everything from the Premium trimmed model I tested last year, or at least everything that hasn’t already been upgraded for the F Sport. Premium goods include an upgraded 10-speaker AM/FM/CD/MP3/WMA display audio system with an integrated reverse camera, plus Lexus’ awesome computer mouse-style haptic response infotainment controller, driver seat memory, auto-dimming rearview and side mirrors (the former incorporating a compass and the latter getting reverse auto-tilting and memory), a remote garage door opener, a tilt and slide powered glass sunroof, rain sensing wipers, LED fog lamps and LED headlamps.

Where the CT 200h saves you even more money over its competitors is at the pump, where its thrifty hybrid drivetrain allows a Natural Resources Canada claimed rating of 5.5 L/100km in the city, 5.9 on the highway and 5.7 combined. And these new five-cycle testing results are very real, achievable numbers, unlike last year’s two-cycle process that resulted in 4.5 city, 4.8 highway and 4.6 combined. If you want to attain the former set of figures you’ll need to use EV mode whenever possible, although it cuts out at just under 20 km/h so all-electric power is only possible in stop-and-go rush hour traffic, parking lots or other slow moving conditions, and then only if the battery is sufficiently charged. I spent most of my test week in the default Eco mode, and still came pretty close to the claimed combined rating.

On that note, while I mentioned the CT 200h F Sport offers decent performance, I found myself enjoying its eco-performance even more. This had me driving slower around town than I might otherwise in a more powerful performance car, which gave me more opportunity to really enjoy how Lexus has dressed up the interior. It’s a luxurious cabin that pays respect to the revered Lexus nameplate. Most surfaces are covered in soft-touch materials including much of the dash top, the shroud over the primary instrument cluster, the trimming on each side of the lower console, the door uppers, the door inserts, and of course the armrests on the doors and over the centre console bin. Many of these feature a leather-like padded material, stitched in a light grey thread for a classy upscale appearance. As mentioned earlier, the same thread is used on the thick leather-wrapped steering wheel, which is nicely shaped, thick and meaty, with grippy thumb spats for optimal control, and on the seats that are wonderfully carved out to offer ample lateral support. Of course, it’s a Lexus so they’re comfortable too.

The primary instruments feature a really attractive setup including three dials; the left for hybrid information, the centre one a speedometer and the right a small trip computer and fuel gauge, while the switchgear is all first rate, nicely damped, evenly spaced, and without any slop or wiggle.

Those familiar with the Prius will immediately recognize the shifter knob, a small L-shaped lever that includes selections that are totally unique to a hybrid. For instance you can pull the lever directly rearward for a battery charge mode that uses an engine braking process to recharge the battery at a higher rate than usual, but keep in mind it uses a bit more fuel to do so.

If you’re looking for the same level of interior spaciousness as a Prius, the CT 200h doesn’t quite deliver. It’s a much more intimate car with a sports coupe-like ensconced ambiance that includes a lower roofline, made to feel even lower thanks to the black roofliner material used on my F Sport tester, which incidentally wraps down each roof pillar for a finished, premium look and feel. The CT’s smaller dimensions are especially noticeable in the back seats where the L-badged model is less of a limousine than the sizable Toyota, although at five-foot-eight I still had room aplenty.

Likewise in the loading bay, where the CT’s 405-litre (14.3 cubic-foot) capacity should be ample for all but those who regularly fill up their Prius (or Prius V) with life’s gear. Fold the Lexus’ 60/40-split rear seatbacks flat and there’s 965 litres (34.1 cubic feet) of cargo room at your disposal, which was good enough for everything I needed to throw into it throughout my test week.

Of course, a move from Toyota to Lexus isn’t done for practicality purposes. Certainly most Lexus models offer excellent usability, but the climb up from a volume producer to premium status is more about style, quality of materials, features, performance and let’s not forget prestige. Fortunately with Lexus there’s no need to forgo fuel-efficiency or dependability to gain all the benefits that go along with its stylized “L” badge; you can’t get a more reliable hybrid than the CT 200h, or a more reliable car for that matter.

That it does everything so well and looks so good doing it makes the CT 200h F Sport one of the better choices in the compact premium segment, and a car you should consider seriously.
©(Copyright Canadian Auto Press)
Car Shopping Tools