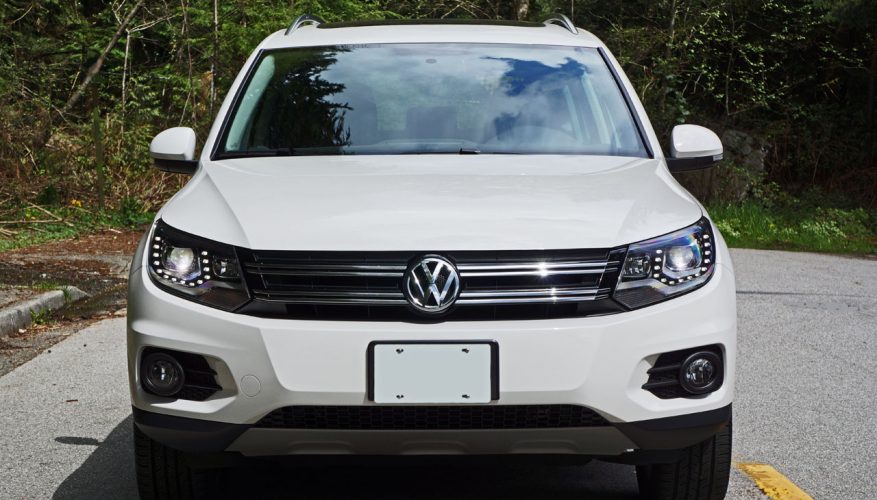 By: Trevor Hofmann
If you want a nice little compact crossover SUV, there’s a lot to choose from these days. In fact, pretty well every volume manufacturer has this segment filled, not to mention most premium players, so if you show up with something substandard you’re going to get sidelined quickly.

Lucky for Volkswagen the Tiguan is an impressive little ute, with pleasant styling, strong performance, good fuel economy, ample roominess, better than average refinement, plenty of features and genuine German-built goodness that makes it feel a full notch above much of its competition. That I was given a Tiguan tester in mid-grade Comfortline trim with both available packages didn’t hurt matters, the $1,750 Appearance Package adding 18-inch Pasadena five-spoke alloy wheels, adaptive HID headlights, LED signature DRLs, and silver roof rails for a decidedly more upscale look, and the $2,075 Technology Package including proximity sensing remote access with pushbutton ignition, touchscreen navigation with a 30-gig hard drive, plus a 300-watt Dynaudio sound system with eight speakers and a sub for a combined visual and auditory experience that felt more Audi than VeeDub.

That’s the case for many models within Volkswagen’s ever-broadening range, mind you. They’ve long been revered for producing near-premium vehicles, the larger Touareg a bona fide luxury SUV capable of mixing it up with almost anything in the midsize class, and the Golf hatchback leading the compact class for refinement. This said VW has tempted fate by cheapening some of its models in recent years, particularly the Jetta that, after a great deal of negative press, has been improved more recently. The Tiguan falls somewhere between the excellence of the Golf and mere adequacy of the Jetta, with the types of high-quality soft-touch surfaces on the dash-top, instrument panel facing and door uppers of the former, and the harder, hollow sounding plastics of the latter beginning on the lower portions of the interior. Likewise the switchgear is mostly good, although wiggly HVAC dials are below VW’s usual high standard and it should be noted that this is one of the only VWs available in Canada that doesn’t feature fabric-wrapped A-pillars.

The interior detailing is nice compared to many rivals, though, especially the ultra-useful octet of dash vents, and the leatherette upholstery looks and feels better than some competitors’ real leather. The leather-wrapped steering wheel is a true cut above as well, electronic parking brake a premium-level feature that some luxury utes don’t even offer, and seat heaters can be set to therapeutic levels for near instant warmth during cold winter mornings. Overhead my tester included a wonderfully airy panoramic glass sunroof, an item that’s becoming more common but still not offered by many rivals.

Still, what makes the Tiguan and all Volkswagens different from their competitors is the way they drive. If the Tiguan isn’t the sportiest entry within the mainstream compact CUV segment I’m not sure what is, its smooth yet rev-happy direct-injected turbocharged 2.0-litre four-cylinder engine a real dynamo thanks to 200 horsepower and 207 lb-ft of torque, its six-speed automatic gearbox benefiting from a Sport mode as well as manual shift-mode for near optimal engagement through the corners, optional Torsen differential-enhanced 4Motion all-wheel drive capable of quick responses to slippery conditions by modulating power to each individual wheel as needed for superb grip no matter the weather, four-wheel independent suspension allowing maximum adhesion and an incredibly smooth ride even over rough, unruly roads, and ABS-enhanced four-wheel disc brakes delivering a level of stopping power even after repeated stomps that few of its peers can reproduce. The Tiguan drives like the Teutonic crossover it is, truly setting it apart from the moribund masses.

Of course, most compact crossover buyers aren’t looking for pavement scorching hot hatch performance. Rather, most want a practical and economical family hauler, with plenty of room and budget-minded thriftiness. Respective to the former, the Tiguan should be spacious enough for the majority of body types front and back, with seating for five adults and loads of cargo capacity. Behind the rear seatbacks are 674 litres (23.8 cubic feet) of volume, while folding those 60/40-split seats down provides up to 1,588 litres (56.1 cubic feet) of gear-toting space. What’s more, a flat-folding front passenger seat can accommodate loads measuring up to 2.5 metres (8.2 feet) long.

Pricing starts at $24,990 plus $1,395 for freight and pre-delivery prep, while the Comfortline starts at $31,390. Fill a Tiguan full of features and you’ll easily pass $40k, and while some rivals include more features for less money none delivers the same German ride and handling combination, or for that matter the overall solidity this Tiguan offers.
©(Copyright Canadian Auto Press)
Car Shopping Tools