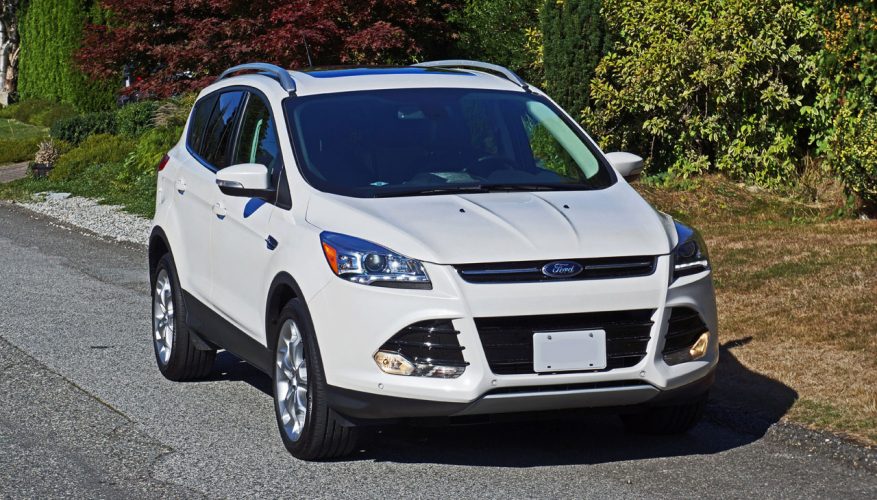 By: Trevor Hofmann
Now that Lincoln has launched its new MKC crossover, Ford’s Escape Titanium isn’t the only luxury model from the Dearborn, Michigan automaker in the compact CUV segment. Yes, it’s good enough to qualify as a premium crossover, better in fact than some that wear fancier badges and sell for thousands more, but the blue oval logos minimize its snob appeal, relegating the impressive little ute to mainstream volume buyers.

That’s ok of course, as we’re all quite happy to have such a great little vehicle made available within such an approachable price range. The Escape Titanium starts at $31,999 with front wheel drive and $34,199 with all-wheel drive, plus $1,650 for freight and pre-delivery prep. My tester was the latter, much appreciated for tromping up the ski hill mid-winter or weekend getaways that get away a little farther than planned, particularly where the road ends and light-duty trails start.

Premium in mind, the Escape Titanium delivers the type of interior expected in the near upper crust. The roof pillars aren’t wrapped in cloth like most in this pricier sector, MKC included, but the majority of surfaces are soft to the touch, even the door uppers next to the driver and front passenger; although those in back are hard plastic, another issue remedied in the MKC. Details like the metal and rubber vent “wheels” atop the dash are really nicely done, and the overall appearance of the interior looks upscale, high-tech and totally original. Everything functions well too, from its brightly lit, large and highly legible primary gauge package to its even more appealing centre stack, capped off with a stunning infotainment display. My tester’s was equipped with optional navigation while the Titanium’s standard Sony audio system sounds full and rich plus comes with all the requisite plugged and wireless connectivity features, and the five-way front seat heaters are downright therapeutic at their highest temperature setting. Yes, the Escape Titanium is an impressive near-luxury ute.

What’s more, its list of additional standard features will make you feel like a small screen star, and includes proximity sensing remote access with pushbutton ignition so you won’t have to look gauche searching through your Louis Vuitton bag for your keys; leather upholstery to match that purse (as long as it’s black or beige – Medium Light Stone to be exact); 10-way powered front seats that are more comfortable than your Roche Bobois sofa at home (the driver’s with memory that also presets the powered mirrors); dual-zone automatic climate control so as not to mess up that expensive Toni & Guy-chopped coif by having to blast the A/C or god forbid open a window; a multi-function steering wheel for accessing the standard message centre just in case your manager got you that part alongside Tony Danza in the new Who’s the Boss? remake; an overhead console with a handy sunglasses holder to keep your pricy Persols within reach if the paparazzi happens to rear their ugly heads; powered windows with one-touch automatic up/down all-round to quickly block paparazzi cameras when needed (the standard rear privacy glass helps in this situation too); automatic headlights and standard fog lamps (to blind them?); Ice Blue ambient interior lighting to match your Tiffany accessories; Sync phone connectivity (not a premium feature per se, but only because Ford offers it across its lineup); the fabulous sounding Sony audio system I mentioned earlier, so you can replay your epically failed singing career over and over again to relive that moment in the studio when the producer said it was going to be a mega hit (hey if Jennifer Love Hewitt and Nicole Kidman – not to mention Tony Danza – can attempt music stardom, why not you?); a rearview camera (to make sure you’re not backing over any paparazzi – unfortunately there are laws against that); reverse parking sonar (ditto); an auto-dimming rearview mirror to check your face/hair just before stepping out into the usual swarm of clicking cameras; a 110-volt power outlet to charge your MacBook Air so your friends can watch your latest TV ad spot; a foot activated hands-free powered liftgate to show off your stylish Miu Mius (or even better those Jimmy Choos you’ve been dying to wear but didn’t have the right occasion); and much more. There’s even a total of eight cupholders for your multi-flavour collection of Perrier.

You can get roof rack cross bars for an additional $100, although Ford didn’t include these on my tester. Instead they upped my wheel and tire package with a set of 19-inch Luster nickel-plated rims on 235/45R19s for $650, and painted the entire car in White Platinum for $400. Additionally, the $2,000 Canadian Touring Package lit up the interior with a powered panoramic glass sunroof and also incorporated voice-activated navigation. Finishing off my tester was a $1,750 301A upgrade package that included a set of HID headlamps, rain-sensing wipers, active park assist, front park assist, and blind-spot detection with cross-traffic alert.

Similar to the high level of standard tech in the cabin as well as everything working away behind the scenes, the Escape Titanium’s drivetrain is an impressive combination of forward thinking technologies. The standard engine is Ford’s advanced direct injected and turbocharged 2.0-litre Ti-VCT GTDI Ecoboost four-cylinder that makes a very energetic 240-horsepower and 270 lb-ft of torque when premium fuel is poured into its 58.7-litre capless tank, or the same level of torque and 231 horsepower on regular unleaded. The latter would be fine with me, considering regular fuel costs about 10-percent less. Either way, press down on the Escape Titanium’s go-pedal and the mighty-might four pulls with the intensity of a much larger V6, while the six-speed dual-clutch automated gearbox with manual mode shifts as smoothly as autoboxes in this segment get and much quicker than most competitors resulting in thrilling acceleration and passing performance aplenty. This is the kind of technology expected of a BMW or Mercedes-Benz and on that note this exact same powertrain just happens to be what Land Rover uses in its trés chic Range Rover Evoque, and it’s right here in the mainstream class thanks to Ford.

It’s a deft handler too, much thanks to the aforementioned 19-inch rims and Torque Vectoring Control as well as Curve Control, the latter two not only capable of transferring torque to the wheels that have the most grip, but more having the capacity to sense the direction you want to go via steering wheel angle and other parameters before preemptively applying power and braking to the appropriate wheels for optimal control through corners, potentially saving your bacon even if you’ve pushed it too hard through a tight corner on a wet winter’s day. Of course there’s a limit to its capabilities, so driving sensibly is still critical, but it’s nevertheless an impressive CUV through the corners and delivers up a nice ride to boot. Underpinning all of this electronic wizardry is a fully independent suspension comprised of MacPherson struts, twin-tube hydraulic gas-pressurized shocks and a stabilizer bar up front, and a multi-link set-up with progressive-rate springs, monotube hydraulic gas-pressurized shocks and a stabilizer bar in the rear.

There’s also no difference in cargo stowage from Escape model to model, the Titanium capable of the same 971 litres behind the second row as other trims, with a sizable 1,920 litres available when those 60/40-split seatbacks are laid flat. Towing is another matter, however, as the more powerful 1.6- and 2.0-litre engines allow you to pull a 907-kilo load behind, significantly more than the base 2.5-litre engine’s 680-kg rating. If you need to pull more you can upgrade the largest 2.0-litre model with the Class II Trailer Tow Package resulting in a total trailer weight of 1,587 kilograms (3,500 lbs).

While Lincoln has finally entered the luxury fray with a compact crossover of its own, for those who don’t like the kind of attention that a premium badge draws from friends and neighbours yet still want to feel like a star when behind the wheel, and of course for those who prefer to save significantly upon initial purchase, the Escape Titanium is an excellent near-premium choice.
©(Copyright Canadian Auto Press)
Car Shopping Tools