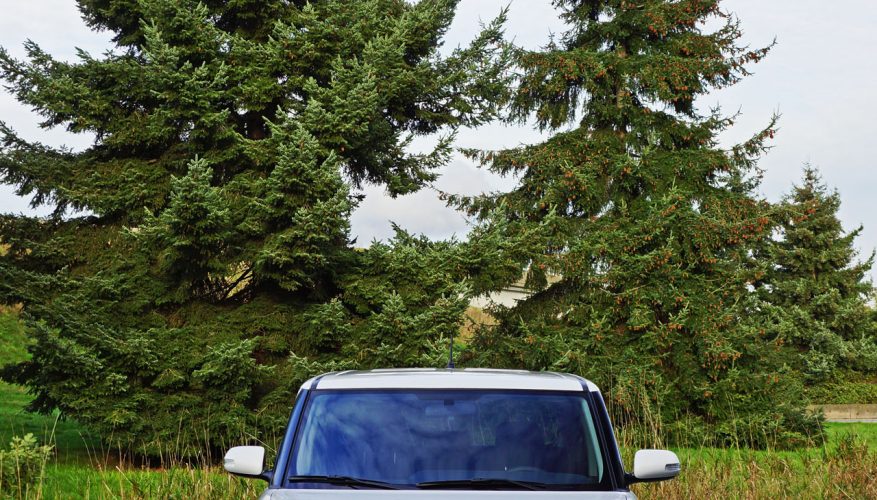 By: Trevor Hofmann
Have you ever wondered what happened to the compact wagon? They used to be everywhere, a stalwart of the new car scene, but now they’re few and far between, and even those that are still around don’t resemble wagons of the past.

Take the Scion xB. By all account it’s a wagon. Its two-box design includes four side doors and an upright rear hatch, but its funky styling somehow seems to slide it into a subset of compact crossovers filled with oddball originals like Kia’s Soul and Nissan’s appropriately named albeit now defunct Cube, having finally gone the way of the originator of this segment here in Canada, Honda’s Element.

While it’s difficult to tell, the uniquely shaped xB actually shares MC-platform underpinnings with Toyota’s new Corolla sedan, not to mention Toyota’s various Prius models, the RAV4 and Scion’s own tC sport coupe. Toyota’s other compact wagon, the Matrix, is based on old outdated MC architecture, which is why it will soon be dropped from Toyota’s lineup (and already has been nixed in the U.S.). And while I’m tempted to speculate on whatever Scion’s iM Concept is, soon to be revealed at the Los Angeles Auto Show (a reworked sportier looking Scion-badged Toyota Auris five-door anyone?), I’ll stop there and just satisfy myself with the xB I only just drove last week.

I first slid behind the wheel of Scion’s boxy little xB in 2010, when Toyota Canada finally launched the Scion brand north of the 49th. That 2011 model was silver and this 2014 one white, but other than that there’s not much that differentiates the two. Then again a new set of vertical LED DRL/fogs look cool, the entire car seeming custom crafted from front to back, or should I say ready to be customized. My 2011 tester had a sweet set of 19-inch TRD rims wrapped in 235/35 ZR19 Toyo performance rubber, all framing gorgeous cross-drilled front rotors, while its back end was finished off in a protruding rooftop spoiler. The last xB I reviewed before this one was a 2012 Release Series 9.0, complete with special burnt orange paint and other features. In contrast my most recent white and black trimmed xB tester was a blank canvas ready for some artistic tuner’s spray gun, its wheel cover-garnished stock steel rims on 205/55 Goodyear Eagle RS-A 16s identical to what gets shipped with a base Corolla.

But that’s Scion’s shtick. Deliver a well-built, well-designed car shaped like nothing else on the road, fill it with all the options you’ll likely need as standard kit and then let you fit it out with your own paintwork, ground effects and aero aids, wheels, audio upgrades and other customized details to make your ride something that gets noticed. They offer a TRD and aftermarket parts catalog filled with everything you’ll likely need, stocking much of it at the dealer level, or they’ll leave you on your own to find what you need to personalize it any way you like. It’s a great idea, although buyers who fit into this targeted compact tuning culture aren’t exactly plentiful.

Fortunately the xB is plenty practical too, which has made it a favourite with mainstream buyers looking for a highly useful and efficient life hauler with personality. It’s cavernous inside. Scion should stretch one of these for the SEMA show and then let it do duty on the Las Vegas’ strip as a compact limo. Legroom and headroom seems adequate to host a line of UNLV Rebels, although shortest guard Dantley Walker would likely be relegated to the rear centre position and might not enjoy the same level of comfort as Okonoboh and Wood to either side. Of course, just these three result in 279 kilos (615 lbs) of human cargo without adding in the driver or front passenger, so even if the xB’s passenger volume could handle the size of XXXL basketball players, they just might max out its payload capacity.

Tongue firmly in cheek, most won’t need to take advantage of xB’s vaulted roofline or lengthy legroom, but all will appreciate its cargo carrying capacity. In behind the 60/40 split-folding rear seatbacks are 328 litres (11.6 cubic feet) of gear-toting space, or about the same as offered in most compact sedans, but lay those seats flat and a voluminous mini-minivan’s worth of load hauling space appears, the final tally being 1,979 litres (69.9 cubic feet).

Scion doesn’t even try to cover all this space in high-end soft-touch plastics or any other premium-like niceties, but rather delivers durable harder finishings that are nicely textured and suitably stylish, the highlight being a cool silver metallic waterfall pattern surrounding the gear lever. Just above, a three-dial manual HVAC interface should be familiar to Corolla owners. It’s a nice looking setup that’s super easy to use, while the car’s Pioneer-sourced double-DIN display audio system looks appropriately aftermarket, as was the plan, good enough for most but important for those wanting to swap it out for something that suits their individual taste. I found this system’s sound more than adequate and general functionality excellent, while the integrated Bluetooth hands-free system easily hooks up to most smartphones and streams audio too. The six-speaker system comes with the usual AM/FM/CD/MP3/WMA functions as well as an aux jack and USB input, plus an auto sound levelizer.

Unlike all other aspects of the xB’s interior design, its central primary gauges might take some a bit of getting used to. I’ve driven Scions and Toyotas with similar setups for years, mind you, and find that once acclimatized it comes as second nature to look a bit to the right and then upwards to the top of the dash for all the info you need while driving, and the big, fat, red LCD alphanumerics are plenty legible. Ahead of the driver things look somewhat spartan in comparison, especially considering there’s just one set of buttons on the multi-function steering wheel’s spokes, these for the audio system, while cruise control functions can be actuated via a stalk on the lower right side of the steering column. Tilt and telescoping capability makes that steering wheel fit most any size driver, and the xB’s driver seat doesn’t only look great in its black and grey cloth upholstery, but proved extremely comfortable too. It gets fore/aft, recline, height, and vertical headrest adjustments, while the front passenger benefits from all of the above except height adjustment.

While the xB looks a bit radical from the inside out, it uses the most common of powertrains to turn the front wheels of the even more common MC-platform underpinnings I mentioned before. This should be good news to folks who simply want their stylish ride to get them where they’re going each and every time they set out. Behind the xB’s blunt grille is Toyota’s 16-valve, DOHC 2.4-litre four-cylinder engine featuring variable valve timing with intelligence (VVT-i), good for a spirited 158 horsepower and 162 lb-ft of torque, plus claimed fuel economy of 9.5 L/100km city, 7.2 highway and 8.4 combined for the five-speed manual or 9.5, 7.2 and 8.5 for the optional four-speed automatic, as well as a Tier 2 Bin 5 emissions rating.

Yes, the as tested four-speed is certainly not state of the art, but there’s always a tradeoff for reliability. On the road this gearbox sucks a bit of fun out of the otherwise energetic four-cylinder, but this engine makes ample torque so I’m guessing a five-speed or even six-speed unit wouldn’t improve performance all that much. Truly, if you want to have the most fun you’ll need to stick with the stick.

On that note handling is pretty good all things considered, the consideration being those stock steel rims on 205/55 Goodyear Eagle RS-A 16s I mentioned earlier. There’s nothing wrong with this wheel and tire combination, as they’re good enough around corners for most while extremely comfortable over dips and bumps, but I’ve tried the xB with larger diameter alloys rims and lower profile rubber, not to mention a stiffer aftermarket sport suspension along with beefed up brakes, and it’s an altogether different kind of animal. Keep in mind its torsion beam rear suspension isn’t independent like the MacPherson strut setup in front, but let’s not forget that a number of legendary BMWs have used similar componentry to win on the track, so it’s all in how you tune it.

That last point pretty well sums up the xB, or for that matter any Scion model. Like I said before, you can get your xB with a clean canvas to create whatever you want on, or opt for one of their “Release Series” cars, the latest xB to get this treatment being the RS 10.0. This version doesn’t look much different from my Alpine White painted tester, although its exterior finish is coated in Electric Quartz pearl while unique Tungsten Grey wheel covers and electric green LED lighting highlight exterior mods. Inside, the RS 10.0 gets a reverse camera added to the infotainment system, while the pièce de résistance is a very handy wireless charging tray (which incidentally gets added to the top-line Toyota Camry for 2015). Additional projected and ambient interior lighting join piano black lacquered trim for a different take on the xB theme.

You can dress up this or any other xB further with optional leather upholstery, navigation added to the display audio system, the Bongiovi sound upgrade, and of course the numerous styling and performance enhancements touched on earlier, for a car that’s fits your unique style.

The xB is a vehicle like nothing else on the road, combining an irresistibly unorthodox personality with more practicality than a Matrix and the always-faithful reliability of a Corolla. If more people took an xB for a drive and then spent a little time playing around with its many features and overall utility it would sell in much greater numbers than it currently does. Those smart enough to buy into this intelligent little car are likely laughing now, as along with the xB’s many attributes comes the added enjoyment of exclusivity, and that’s hard to put a price on.

The 2014 Scion xB can be priced however, starting at just $18,960 plus $1,695 for freight and pre-delivery prep. Not bad for all of its style and features, don’t you think?
©(Copyright Canadian Auto Press)
Car Shopping Tools