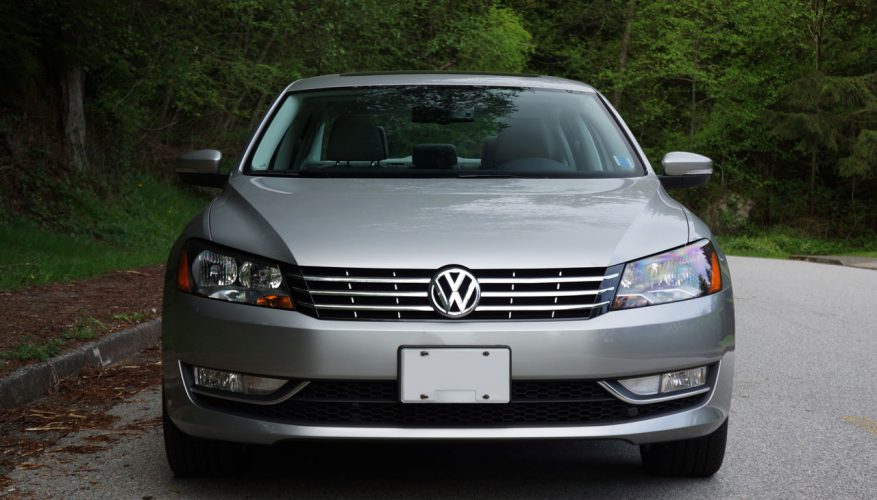 By: Trevor Hofmann
The Passat as we know it today is a very different car than it was at its beginning. Back in 1973 it was a two-door “fastback” penned by the great Giorgetto Giugiaro, while its chassis and mechanicals were pulled from the four-door Audi 80 sedan. In case you’ve never heard of Giorgetto Giugiaro, he was also responsible for such legendary classics as the 1960 Ferrari 250 GT SWB Bertone, 1963 Alfa Romeo Giulia Sprint GT/GTV, 1963 Iso Rivolta Grifo, 1966 De Tomaso Mangusta, 1966 Maserati Ghibli and 1971 Bora, 1972 Lotus Esprit, 1977 BMW M1, 1981 DeLorean DMC-12, and many others, plus of course VW’s original Golf, Scirocco and Jetta models. On another note, if you were somewhere on the North American continent in ’73 you likely won’t remember the Passat being available at all, because it wore the Dasher nameplate here. The second-generation Passat that came along in ’81 was called Quantum here, the actual European designation for the car not offered on this side of the Atlantic until 1990 when the third-generation debuted. Since this time the name remained Passat from generation to generation as have its Audi underpinnings, that is until the most recent design arrived in 2010 as a 2011 model.

The latest Passat, also known as the New Midsize Sedan (NMS) is the result of an altogether different approach to the global market for Volkswagen, and while it’s often referred to as the North American Passat because it is produced in Chattanooga, Tennessee and sold throughout the U.S. and Canada instead of the smaller Audi A4-based Passat which continues to be available in Europe and other markets (and gets a sharp looking redesign this year), the Passat NMS (as it’s called internally) is also a global player, produced in China and sold in Chinese, South Korean, and Middle Eastern markets. If you read these pages often you’ll already know that these markets share a love of larger four-door sedans just like most American and many Canadian buyers, so if you previously wouldn’t have considered a Passat because of its smaller dimensions you might want to drive one now as it’s one of the larger cars in the mid-size segment.

Climb inside and the new Passat’s spaciousness is immediately apparent. Leg, shoulder, hip and headroom is readily available, especially in back where it’s a veritable limousine compared to some others in this category. And if gear-toting ability is an important factor in your buying decision the Passat’s 450-litre (15.9 cubic-foot) trunk is hard to beat in the sedan class, with 60/40 split-folding rear seatbacks ready and willing to extend its usefulness.

One of the benefits of Volkswagen ownership has long been high-quality interiors and comfortable seating, and to that end the new Passat offers materials quality that might not be quite as premium-like as the previous Euro-spec versions, but is at least on par with its mid-size peers, while its seats are as superb as ever. The driver’s seat is especially comfortable while delivering a level of lateral support that most in this segment don’t. My tester was a top-tier Highline version, which meant that all of the aforementioned space was kitted out to VW’s highest level of specification, including beautiful leather with suede-like Dinamica inserts for plush luxury combined with a gripping seat-of-the-pants experience, literally. On top of that (not literally) the model’s 6.5-inch touchscreen infotainment system incorporates a rearview camera and the convenience of integrated navigation, while a 400-watt eight-speaker Fender audio upgrade provides powerful performance and, as an added bonus reminds me of my wasted youth, strumming (and attempting lead) on a band mate’s Strat, my very own Tele, and yes even a sweet little Mustang (guitar) through my Twin Reverb amp, but alas my bass was a Squire (cheaper version of the Fender Precision), which at the time would have been like buying a Volkswagen made in Japan (the equivalent “optics” of buying one made in China now).

As mentioned, I could get the entire band and much of our equipment into today’s Passat, and in Highline trim I wouldn’t need to use a key to do it. This model comes with VW’s KESSY proximity-sensing keyless access and pushbutton ignition system, much appreciated when hands are full, while the Highline’s exclusive pass-through found behind the foldable centre armrest would have been ideal for mike and cymbal stands (let alone skis). Other Highline features include a HomeLink garage door opener for getting all of that gear into storage after late night gigging, as well as those comfortable and supportive eight-way power adjustable front seats I mentioned earlier, which include power lumbar support and three-position memory (also controlling the side mirrors) on the driver’s side, while gorgeous genuine nut burl trim looks even better at dusk when the cabin’s ambient lighting gently bathes everything in a soft glow, and lest we not forget footwell ambient lighting allows all to admire your retro silver-starred Paul Stanley-inspired “heels” (not a good idea to drive in those mind you). Lastly, the Highline’s standard auto-dimming rearview mirror allows you to enjoy all of the cool looking backlit switchgear without burned out retinas.

All of this upscale kit gets added to other features also available on second-rung Comfortline models and/or base Trendline trim, including but not limited to high-quality leather wrapping the three-spoke multi-function steering wheel, the shift knob and the handbrake lever, plus brushed aluminum or titanium trim, tilt and telescoping steering, automatic headlights, fog lights, LED turn signals integrated into the power adjustable and heatable exterior mirrors, one-touch automatic opening and closing feature for all power windows, variable intermittent wipers with heatable washer nozzles, dual-zone automatic climate control, heatable front seats, a Media Device Interface (MDI) with either 30-pin or 8-pin iPod connectivity included, and USB, mini USB and aux-in available from your dealer for less than $20 apiece (I’m willing to guess they’d throw a USB plug in for your Android or Blackberry device if you asked nicely). This said Volkswagen Canada might want to get with the program and make the USB plug standard, as over a year ago Google’s Android already a whopping 43-percent of total Canadian smartphone usage, whereas Apple’s iOS was significantly lower at 35-percent (although it may be up slightly now due to iPhone 6), the remaining 22-percent owned by Blackberry, 19-percent and Microsoft’s Windows Phone at 2-percent (the last percentage-point residual from rounded off numbers).

On that note, here’s a personal plea to abstain from using those devices while driving, but if you persist you can feel somewhat comforted that the Passat is a large car that will protect you better than most smaller ones in a crash, while its standard safety kit includes the usual full count of airbags, plus stability and traction control, and of course ABS-enhanced four-wheel disc brakes, while VW’s Intelligent Crash Response System (ICRS), tire pressure monitoring, an anti-theft alarm and an immobilizer are also part of the base package.

It’s a lot more comforting to head out on the road in one of today’s ultra-safe cars than in the hollowed out domestic panel vans of my musical youth, something I thought about as I drove the Passat over the same stretch of Highway 1 and 5 experienced on my last “big” tour. That was during my second-to-last “we’re gonna make it this time” phase, already deep into my ’30s, but that tour van was a beautiful big ultra-comfy 60-seat motor coach. I’m guessing the fuel bill was a bit steeper in that big rig than this time around, despite both vehicles powered by turbo-diesels.

My Passat tester came fitted with VW’s latest 2.0-litre four-cylinder TDI Clean Diesel, good for 140 horsepower and 236 lb-ft of torque, plus a claimed 6.7 L/100km city and 4.7 highway fuel economy rating, when equipped with the as-tested automated dual-clutch DSG. Those numbers are pretty close to what I achieved, which is impressive given they’re based on the old Transport Canada two-cycle testing method that has now been replaced by a more arduous five-cycle process, my around-town results being 6.6 L/100km and the a stretch of mostly uphill freeway from Chilliwack to Kelowna, BC completed with only a quarter tank depleted, or more specifically 5.0 L/100km.

And I wasn’t hypermiling the Passat either. My notes attest to it: “Diesel pulls so strongly uphill… it flies, passing everything without even breaking a sweat.” I cruised along effortlessly at 120 to 130 km/h, which was difficult to limit myself to as the big sedan begs to be driven at 150 to 160, but the long radar of the local law kept me from stretching its legs too often and thus my wallet enjoyed a little more surplus cash.

That DSG gearbox gets a Tiptronic manual mode that’s shiftable from the centre lever or via steering wheel-mounted paddles, and if you want quicker response to throttle input you can slide the shift lever rearward into Sport mode. This is all very good, although I’d love to make the same trip and additionally take to some of the area’s mountain passes with the standard six-speed manual. The Passat is one of the only cars in its class to offer a manual gearbox, which says a lot about how Volkswagen owners drive their cars. I won’t go so far as to say this big sedan corners like a GTI, but it’s much more manageable through the curves than most of its rivals while feeling every bit as comfortable at fast highway speeds; my notes adding, “Love the ride, i could drive this car all day.” Volkswagen fitted my tester with an upgraded set of twin five-spoke 18-inch alloys on 235/45R18 rubber, improving on the Comfortline and Highline models standard 17-inch rims.

The Passat Highline TDI starts at $33,475 plus a very reasonable $1,395 for freight and pre-delivery prep, although if you’re still on a part-time musician’s salary you can get a Comfortline TDI for $28,575 or an even more modest Trendline TDI for a mere $26,575, and that’s before any discount of course. If you’d rather get your payment down a bit by increasing your daily running costs in order to pay for your new Fender reissue ’63 Tube Reverb in vintage flesh-tone cloth, Volkswagen offers all Passat trim levels with an efficient direct-injection 1.8-litre four-cylinder gasoline engine starting at just $23,975. The top-line Passat Highline gets a 3.6-litre V6 alternative too, but that model is reserved for the hard-to-please prima-donna lead singer in the band (that would’ve been yours truly… less the “donna”) or lead guitarist/songwriter/wanna-be-lead-singer that always left the band to make it on his own by croaking out his own songs.

No matter how you outfit the new Passat, it’s a good looking, well-made, nicely featured, great performing and thoroughly accommodating mid-size four-door that truly borders on full-size, while in TDI form at least, it delivers the fuel economy of a much smaller car. It might not deliver the same premium feel of its predecessor, but it’s not as pricy as that old car was either, while its high level of fit and finish and elegantly upscale European design set it apart in the mainstream midsize crowd, making the Passat one of the few aspirational cars in the class.
©(Copyright Canadian Auto Press)
Car Shopping Tools