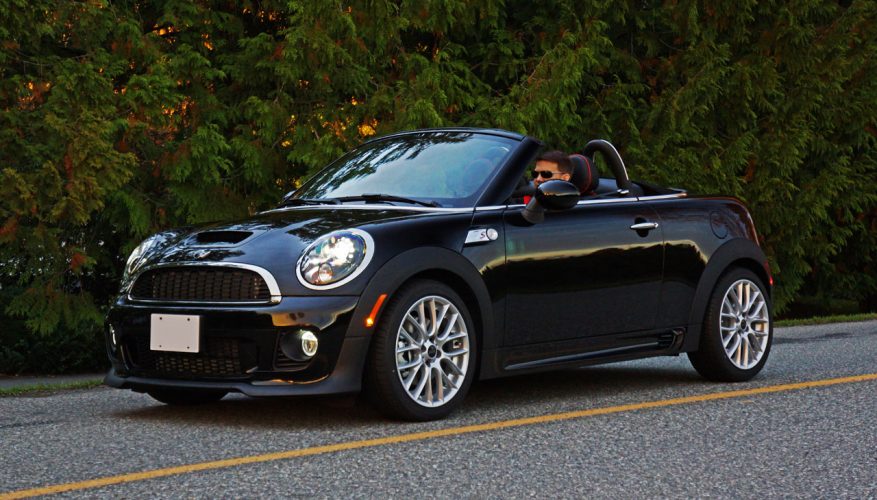 By: Trevor Hofmann
While Mini completely revamped the Cooper Hardtop last year and will bring a new five-door version plus a reworked six-door Clubman to market for 2015, the rest of the model lineup will remain mostly unchanged this year, and as far as I’m concerned that’s not a bad thing. I love the more aggressive look and slimmer bodylines of Mini’s outgoing generation, the sharply dressed Roadster being one of its most enticing examples.

I had opportunity to test a base 2014 Cooper Roadster not too long ago, and while I loved the way it looks, its impressive roominess in the cockpit and in the trunk, and of course the way it takes to the corners, the Cooper S Roadster satisfies my desire for more power without much drain on the pocketbook when it comes time to fill up.

Behind the Roadster’s impishly menacing grille is a more potent version of Mini’s 1.6-litre inline four-cylinder engine, using direct-injection and a twin-scroll turbocharger to raise its game from 121 horsepower to 181, and from 114 lb-ft of torque to 177 lb-ft; 192 on overboost. The difference between the two models isn’t merely noticeable, it’s a full blown category three storm of drama, the little turbo stirring up a whirlwind of get-up-and-go that immediately slingshots the tiny drop-top forward with near relentless energy. OK, maybe category three should be saved for the 208 horsepower John Cooper Works Roadster, but you get the gist.

Mini offers a close-ratio six-speed manual as standard or the optional six-speed automatic with steering wheel paddles included in my tester, and while a manual might be preferable for exacting the most out of the engine and maintaining as much control as possible through corners, the automatic doesn’t give up much in performance while providing a great deal more convenience within city traffic. For instance, the sprint to 100 km/h takes 7.1 seconds with the manual and just 0.2 seconds longer with the autobox, such an infinitesimal amount that I’m quite certain you won’t be able to feel it by the seat of your pants. My test notes remind me of just how impressive it was: “Paddle shifters react to finger flicks quickly, Mini’s automatic gearbox feeling a lot like an automated dual-clutch transmission.” In comparison the base Roadster needs 9.4 seconds to achieve the same speed with the manual, and a full 1.2 seconds more to do so with the automatic. Back to the whirlwind I spoke of before, you can certainly feel the difference between 7.3 seconds to 100 km/h and 10.6.

Along with the upgraded drivetrain my Cooper S Roadster tester was fitted with a set of larger cross spoke 17-inch rims and 205/45R17 rubber for more advantageous apex carving abilities (base models use 16s). These come as part of Mini’s JCW Package that also firms up the handling with a sport-tuned suspension while adding dynamic traction control, a JCW aerodynamic package, JCW exterior and interior packages, and a leather-wrapped JCW-badged steering wheel. While the base Cooper Roadster was wonderfully capable through the same sets of twists and turns I threw it through during the summer, the JCW-infused Cooper S Roadster was like piloting a race-prepped track car in comparison, while the added power allowed for a lot more excitement while exiting corners and barreling down the straights.

Of course, I’ve driven race-prepped cars and as brilliant as they are from a performance perspective their complete lack of interior refinement (or interior finishings at all) and zero sound deadening combined with ultimately abbreviated exhaust systems would be horrible to live with day-to-day. The Cooper S Roadster on the other hand is a bonafide luxury car, especially the way Mini outfitted this particular example. All Minis get the upscale premium treatment when it comes to soft touch surfacing and quality electronics, enhanced with retro-chromed toggled switchgear and superbly comfortable seats. My tester improved things further by adding a variety of extras such as the Premium Package, which includes a sensational sounding Harmon/Kardon audio upgrade, an auto-dimming rearview mirror, a side mirror package, automatic rain-sensing wipers, heated seats, a centre armrest, and rear parking sonar that’s much appreciated when the top is lowered and rear vision is reduced, plus front and rear fog lights.

Additionally, my tester’s Wired Package added USB and Bluetooth streaming audio, smartphone integration, voice recognition, Mini Connected (which is one of the most advanced infotainment systems on the market, especially if you’re pairing up an iPhone), and a navigation system, all set within a large circular central speedometer, the needle of which spins around the outside of the infotainment display for a truly remarkable visual.

What’s more, Mini added the Style Package that includes extra chrome inside and out as well as piano black accents to the interior. Standalone upgrades included black reflectors in the headlamp clusters, Championship black leather upholstery with hot red piping to match all the red stitching found throughout the rest of the cabin, while accessing the car was made easier with proximity sensing Comfort Access to go along with the standard pushbutton ignition.

Mini also integrates a set of standard roll hoops behind the driver and passenger’s headrests, while the reinforced windshield frame acts as a front roll bar, so as long as you’re securely locked into the seatbelts you’ll be kept as safe as possible even if a rollover occurs, at which point a crash sensor would shut off the fuel flow, turn the lights on and unlock the doors while Mini’s telematics system would automatically call for emergency help and alert the authorities of the situation. Of course, as part of the passive safety system a full suite of airbags is standard, while active safety solutions include dynamic traction control and dynamic stability control, plus ABS-enhanced four-wheel discs with brake assist and Cornering Brake Control to make sure that accident never happens in the first place.

The base Roadster starts at $28,900 plus $2,295 for freight and pre-delivery prep, whereas a Cooper S Roadster can be had for just a little more at $32,900. The S gets comfortable and supportive sport seats, plus a unique set of 16-inch rib spoke alloys, and a Sport button for getting the most out of the enhanced powertrain.

Eschewing the latest retractable hardtop trend, Mini continues forward with classic looking cloth tops for both of its convertible models that allow for lighter weight and better storage, while delivering good sound deadening thanks to lots of insulating materials and nice tight build quality. My tester’s top included semi-automatic operation, requiring a simple twist of a centrally-mounted release handle and then a little pull on a chromed toggle to power it down within its stowage compartment, which doesn’t infringe on cargo space one iota. Actually, the Roadster’s boot is 80 litres larger than the regular Cooper Convertible’s trunk at 240 litres total capacity, which also makes it roomier than the Mazda MX-5’s trunk.

All that performance and good fuel economy too? That’s just one of many Mini attributes that keep owners happy long after their initial purchase. I’m guessing that life with a Cooper S Roadster would be especially enjoyable, and certainly look forward to the next sunny day I get to take one for an extended spin.
©(Copyright Canadian Auto Press)
Car Shopping Tools