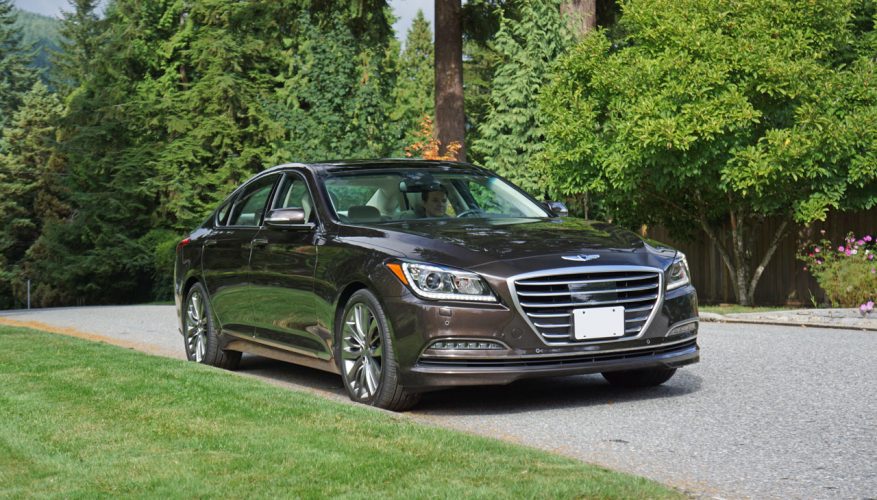 By: Trevor Hofmann
There must be some kind of law. Or at least a clause in the small print of Peter Schreyer’s old Audi contract that stipulates he’s not allowed to design a car for Hyundai that is better looking than the “competing” model at the four-ringed German luxury brand he used to work for. But even if his past employer could do something about the latest Genesis sedan’s stunning new styling, the sheer goodness in its engineering and impressive value proposed by its full feature set and comparatively down to earth pricing would ultimately win out in the end. Well, win out with price-conscious pragmatists who don’t give a damn about prestigious nameplates, at least.

Truly, the only thing the new 2015 Hyundai Genesis 5.0 Ultimate lacks that its German rivals possess is a premium badge, the V8-powered, eight-speed automatic-infused, all-wheel drive sport-luxury sedan one of the more impressive premium-level four-door players I’ve had the pleasure of piloting in some time.

Schreyer wasn’t personally responsible for the new Genesis design, by the way, but rather John Krsteski, Managing Director of Hyundai North America Design, the car being penned at the company’s Irvine, California headquarters. So if you like it, send happy thoughts to Krsteski and company, and if you’re not so enamoured don’t dump on Peter, although as Chief Design Officer of both Hyundai and sister-company Kia, he no doubt signed off on it.

Where the first-gen Genesis was an impressive car in search of some unique design personality, the new model comes to market with some seriously street savvy strutting capability borne of time tested styling elements. First off, its six-sided grille is mega, beginning at the usual location just below the hood line and then spanning east and west in an attempt to take over the entire frontal area, before deep diving downward, the fall only stopped by a narrow but necessary lower fascia. Closer inspection shows that only its upper four slots accept engine ventilation and even these are blocked at centre by a shiny square of plastic-covered technology (more on that later), the lower three slots filled in to aid its ultra-slippery 0.26 coefficient of drag. Both headlamp clusters and fogs incorporate de rigueur LEDs, while the elegantly shaped front fenders are thankfully devoid of equally popular faux side vents, a styling trend that’s almost as overused as those LEDs I just noted. Light emitting diodes show up again on the mirror cap turn signals, the high chrome-rimmed shoulder line resulting in Hyundai’s own take on the Hofmeister kink as the side window abruptly turns upward, while radically canted rear C-pillars eventually level off next to an elegant set of (once again) LED taillights, just above a sporty duo of twin oval exhaust tips to add yet more performance to the already athletic look. There’s nothing remotely wallflowerish about this design, or about the way the Genesis dances.

The old Genesis sedan was such a revelation through corners that it drew comparisons with the best of best sport sedans from Bavaria and elsewhere around Germany, not to mention the rest of the globe, and while the R-Spec nomenclature has been replaced with Ultimate in top-tier trim, Hyundai’s fabulous forty-eight-valve, direct-injected 5.0-litre Tau V8 remains mostly unchanged. Mostly, other than losing 9 horsepower. I’ll take its slight gain of 6 lb-ft of torque and advantage of peak horsepower now attainable 400 revs sooner, all necessary due to the 242 kilos (534 lbs) of extra weight the sleeker looking but fractionally longer new Genesis gains over its predecessor.

That weight can be felt at take off and in the corners, although the Genesis’ rigid body structure, upgraded four-wheel multi-link suspension’s sophisticated continuous damping control and new Magna-supplied HTRAC all-wheel drive help keep the 2,126-kilo (4,687-lb) car focused within its lane when pushed beyond reasonable speeds. The aforementioned V8 along with its 420 horsepower and 383 lb-ft of torque make sure of the latter, complemented by a very quick and smooth shifting ZF-sourced eight-speed automatic with steering wheel paddles, while HTRAC electronically controls the torque split between the front and rear axles depending on road and driving conditions, with fore and aft adjustment set automatically or via pre-set driving modes. Sport mode, for instance, will transfer up to 90-percent of twist to the rear wheels in the dry for a more engaging driving experience. The system and car has been exhaustively tested on Korea’s Yeongam F1 circuit as well as Hyundai’s new European test facility at the Nürburgring Nordschleife track in Germany.

It feels like it was born and bred in the Rhineland. Just southeast is where you’ll find the Genesis 5.0 Ultimate’s true engineering inspiration, not the aforementioned Audi A6 but rather BMW’s 550i xDrive that incidentally only weighs 76 kg (168 lbs) less than the substantive Hyundai. I know it would be considered sacrilege to even utter Genesis and 5 Series comparisons under your breath in and around BMW’s Munich homeland, but it’s also irreverent to not speak the truth and the deserving Genesis should be compared with the best from Germany, Britain, the U.S. and Japan.

For comparison purposes let’s agree that the performance of all premium midsize sedans is similar, Genesis included, even though the top-line Hyundai will walk away from some of its peers, especially the Japanese entrants and the Audi. The A6, 5 Series and the Cadillac CTS get turbocharged four-cylinder engines in base trim, good for fuel economy but nowhere near as powerful as the base Genesis’ 3.8-litre V6, rated at 311 horsepower and 293 lb-ft of torque. Unlike the BMW, the Audi doesn’t offer a V8 unless you opt for a much pricier S6, while the similarly powered Cadillac CTS VSport derives its output from a turbocharged V6 and doesn’t offer all-wheel drive despite its $75k base price. That’s about what you’ll pay for a 550i xDrive or Mercedes’ E550 4Matic, the comparable Audi costing about $10k more. And incidentally, neither Lexus nor Infiniti offer anything in this class with anywhere near the Genesis V8’s performance, while Acura’s V6-powered RLX is front-drive until you opt for the hybrid.

Respect requires me to mention the Chrysler 300 SRT as a competitor too, but despite strong performance and fairly good interior refinement, its aging styling, old school muscle car approach to power, antiquated five-speed automatic, rear-drive-only layout, dated chassis and lack of premium-level advanced technologies make it an also ran when put up against the top-line Genesis, while the price comes pretty close to the fully loaded Hyundai despite the domestic sedan’s shortcomings.

Right off the top the Genesis 5.0 Ultimate’s starting price of $62,000 plus $1,995 for freight and pre-delivery prep represents a significant value proposition over its similarly powered premium-badged rivals, at about $13,000 less than the majority and $23k less than the Audi S6, but this initial glance doesn’t factor in the Genesis’ supersized dose of standard features, including that advanced tech I just mentioned.

The list includes a slim credit card-sized smart key capable of triggering the proximity-sensing access and pushbutton ignition, a 7.0-inch electroluminescent Supervision gauge cluster, head-up display, heated power-folding auto-dimming side mirrors with integrated turn signals and welcome lights that display the Genesis logo on the ground beneath, a heated leather-clad powered tilt and telescopic steering wheel, premium Napa leather upholstery, wonderfully comfortable and supportive 12-way power-adjustable front seats including powered lumbar support with three-way heat and ventilation plus memory, powered driver seat thigh support and side bolsters, heated rear seats, adaptive and auto-leveling HID headlights with high beam assist and washers, rain-sensing wipers, adaptive cruise control with stop-and-go capability, an electronic parking brake, dual-zone automatic climate control with auto-defogging, a 9.2-inch infotainment system with navigation and an iDrive-like multimedia controller on the lower console, a fabulous 17-speaker Lexicon Discrete Logic 7 surround sound audio system, a rearview camera, front and rear parking sensors, a large powered panoramic sunroof, beautiful matte finish open pore natural wood trim, genuine aluminum accents, a suede-like soft microsuede headliner that wraps down each pillar, soft-touch plastics on the upper and lower dash, the console and all the way down the doors, rear side window sunshades, a powered Smart Trunk lid that opens just by standing next to it for a few seconds with the key fob in your pocket, 19-inch dark silver finish alloy wheels, all the usual airbags including two rear thorax bags for the back seat and one for the driver’s knees, blind spot detection with rear cross traffic alert and lane change assist, lane departure warning and lane keeping assist. The latter was as close to automated driving is I’ve ever experienced. If it wasn’t for the system telling me to put my hands back on the steering wheel, I would have kicked back and allowed it to completely take over, especially considering that this Genesis also includes autonomous emergency braking. Add this much kit to any of the Germans and their MSRPs jump up by $9,000 to $11,000, pushing their prices up to almost $90,000 with their freight charges added in, and nearly six figures for the Audi.

That last item, autonomous emergency braking is one of the reasons the Genesis walked away with the IIHS’ revered Top Safety Pick+ award, the first ever rear-wheel drive luxury sedan to earn this highest safety rating (the Genesis is also available with rear-drive in the U.S.) and the highlighted technology in Hyundai’s Super Bowl ad, “Dad’s Sixth Sense,” which was deemed the second most effective advertisement during the first quarter of 2014 (not the first quarter of the super bowl) and the third highest scoring ad of all time according to analytics firm Ace Metrix. Now that we’re talking awards the new 2015 Genesis is one of five “most loved” Hyundai models as noted in a Strategic Vision survey, the most of any manufacturer, while it was a winner of the Best Car Tech categories for both TechHive and PCWorld magazines during the 2014 Consumer Electronics Show (CES), took Texas Car of the Year honours, Top Family Choice in Greater Atlanta and it’s on the 2015 North American Car of the Year shortlist.

The Genesis 5.0 Ultimate won’t win any award for fuel economy, however, its 17.3 L/100km city, 10.5 highway and 14.2 combined rating edged out by all the Germans which use a lot of green technologies such as idle start/stop and regenerative braking to eke out greater efficiency. Then again, its requirement for regular unleaded immediately cuts about 10-percent off of every fill-up so its greater consumption won’t likely hit your wallet at all, and even if it did you could pay for a lot of gas with the $20k-plus you save at initial purchase.

Now that we’re talking practicalities, it’s important to point out that the new Genesis is larger inside and offers more cargo room than the car it replaces. This comes from its 75-mm longer wheelbase, despite its length only growing a miniscule 5-mm. Still, it’s larger than all of the competitive cars mentioned, closer in fact to these brands’ full-size models, which will either be a positive or negative depending on your priorities. Of course, with respect to the simple mass for money argument you can imagine how well the Genesis 5.0 Ultimate would stack up in a value competition against the Audi A8, BMW 7 Series or Mercedes-Benz S-Class.

With great new styling, thoroughly impressive power, deft handling, superb refinement, top-tier technology and so much more, Hyundai has built a new Genesis sedan truly worthy of premium comparison, especially when outfitted in 5.0 Ultimate trim. If your ego won’t get too bruised by owning a mainstream nameplate you should take the time to drive this car.