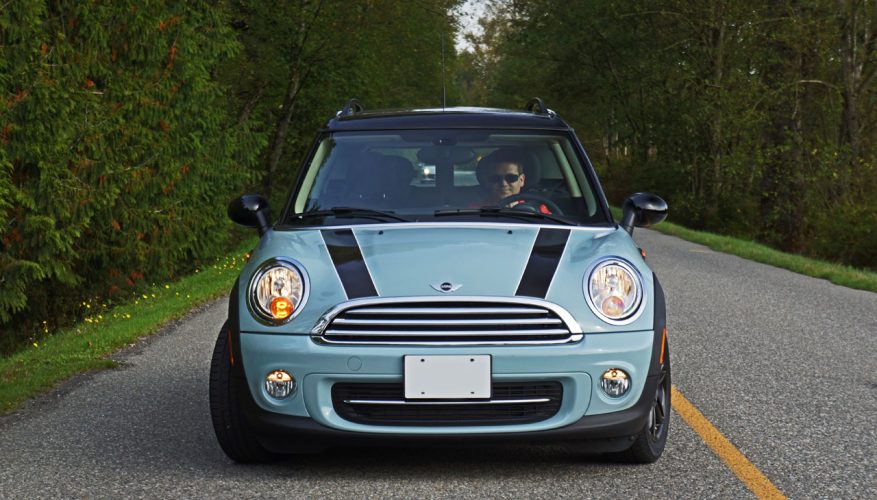 By: Trevor Hofmann
Let me make one point very clear before I delve too deeply into this review: If you’ve always wanted to buy a Mini Clubman but have never gotten around to it, now’s the time. The Clubman, as we know it, is no more after 2014, and the Cooper Clubman I recently drove is one of the last of its kind available anywhere. Don’t get me wrong, the Clubman name will likely resurface soon, something we can feel confident about since Mini showed the Clubman Concept at last year’s Geneva motor show, but in Mini’s quest to pull in yet more buyers by “unquirkying” itself, the new Clubman will get four regular side doors instead of this outgoing model’s three-door layout.

Yes, if you hadn’t noticed, the current 2014 Mini Cooper Clubman has a second rear-hinged “club” door on its passenger side that opens up clamshell-like in the same fashion as some four-door pickup trucks and a small number of high-end luxury cars, such as the Rolls-Royce Ghost and Phantom. Before Mini came to market with its Countryman crossover SUV in 2010, the Clubman was its most practical model, partly due to this extra side door making entering and exiting the rear seats a great deal easier, but mostly because that back door opens up to a considerably larger rear seating area that, thanks to an extra 63 millimeters (2.5 inches) of legroom, now fits six-footers without concern. Likewise, with 160 millimeters (6.3 inches) greater depth there’s 99 litres (3.5 cubic feet) of additional cargo space behind its 50/50 split-folding rear seatbacks and 270 litres (9.5 cubic feet) more when they’re folded flat, resulting in 930 litres (32.8 cubic feet) of total available cargo space, all behind a unique set of Dutch-oven doors that will either be a bonus or a bane to you depending on how you use the car. Getting gear in and out was no more difficult in my experience and they look wonderfully unusual, so I’m a big fan.

While 240 millimeters (9.4 inches) lengthier overall, the Clubman’s longer 2,547 mm wheelbase, which stretches 80 mm (3.1 inches) beyond the old 2013 Hardtop (that still measures the same as the current Convertible, Coupe and Roadster) and just 52 mm (2.0 inches) longer than the new Hardtop, helps it track better on the highway and through long sweeping curves while making it smoother over rough roads.

The added length only makes it 80 kilos (176 lbs) heavier than the old Hardtop’s curb weight, but in a car powered by a 1.6-litre four-cylinder that produces just 121 horsepower and 114 lb-ft of torque, every ounce counts. Still, the Clubman hits the scale at a svelte 1,230 kilograms (2,712 lbs) with its six-speed manual and 1,265 kg (2,789 lbs) with the as-tested six-speed automatic, so it’s not like the wee engine is forced to work too hard no matter what you ask it to do.

The way it sticks to the road mid-curve is one of the reasons the Clubman doesn’t need a lot of power. You simply don’t have to slow down much to take a corner, its adhesion to tarmac allowing you to maintain forward momentum along with optimal revs when exiting a corner. I experienced this first hand while taking the Clubman out for an extended run over a fabulous two-lane stretch of bending, curving, undulating roadway, ideal for testing out the lengthened Mini’s nicely sorted driving dynamics. Even though its wheelbase is longer than the regular Cooper Hardtop, the Clubman’s structure is ultra-rigid, which is no doubt one of the key reasons it not only stays planted to the pavement, but also why its suspension system has been allotted ample wheel travel to always feel comfortable while doing so. Even on rough country roads it never caused a commotion mid-corner where more firmly sprung competitors tend to bounce and jostle in their quest for traction. No, the Mini simply maintains its grip, which is what makes it such a bundle of fun to play with.

While a manual gearbox is often the first choice for playtime amongst driving enthusiasts, the aforementioned autobox is a pretty slick little number all on its own, with shifts that are quite quick and the benefit of manual mode via the gear lever or on the steering wheel by way of spoke-mounted paddles. Rowing through the cogs was helpful for maintaining total control during quick cornering, not to mention very useful for short shifting in order to save fuel.

As fun as the Cooper Clubman is to fast-track through a backcountry road, it’s also quite the little luxury car when enjoyed at a slower pace. My particular example came with three packages and some standalone options, the former starting with the Premium Package that adds automatic headlamps, an auto-dimming rearview mirror, heated front seats, a front centre armrest, a big panoramic glass sunroof, plus front and rear fog lights. Next on the list was the Wired Package, which adds USB and Bluetooth audio streaming, smartphone integration, voice recognition, Mini Connected (which is one of the best infotainment systems available today, especially if you’re pairing up an iPhone), and a navigation system, all housed within an ultra-large central speedometer pod which features a needle that circles around the outside of the infotainment display for some serious wow factor. Lastly, my Clubman tester came with a Travel Package that adds a set of roof rails on top plus a flat loading floor. My tester also featured a cool looking black gloss treatment on its base 16-inch rims, which matched up nicely with its black painted roof, black mirror caps and thick black twinned stripes that ran down the hood.

If you’re so inclined you can add additional option packages to your Clubman, such as the Sport Package that ups the wheel and tire size to 17 inches while also including sport seats and white turn signals, a Bi-Xenon Headlamp and Headlight Washer Package that adds HID headlights, headlight washers and white turn signals (if you didn’t already get these on the Sport Package), plus a Style Package with additional chrome exterior and interior trim, plus black lacquered accents inside. Finally, a Mini Yours Package was also made available on the Clubman, but being that very few new Clubman models are still available you might be hard pressed to find one. This special package adds Satellite Grey paint and black mirror caps on the outside, while inside it gets a two-tone Soda Sport leather-wrapped steering wheel, piano black interior trim, sport seats, and two-tone Pepper White and grey-striped leather upholstery that matches a two-tone theme on the dash and doors. I tested a Cooper Convertible with this package and mentioned that it made the tiny tot seem like the offspring of a Rolls-Royce.

Whether you keep your Cooper Clubman basic or load on myriad options and packages, which also include the performance boost of Cooper S and John Cooper Works trims, you’ll get a comfortable little luxury car with as much fun built in as day-to-day efficiency. And while this brilliantly unorthodox four-door (or should we call it a five-door by including the two swinging doors on the rear?) extended wheelbase Mini is on its way out, I for one look forward to seeing what Mini has in store for the Clubman of the future. After all, a six-door Mini certainly sounds intriguing.
©(Copyright Canadian Auto Press)
Car Shopping Tools