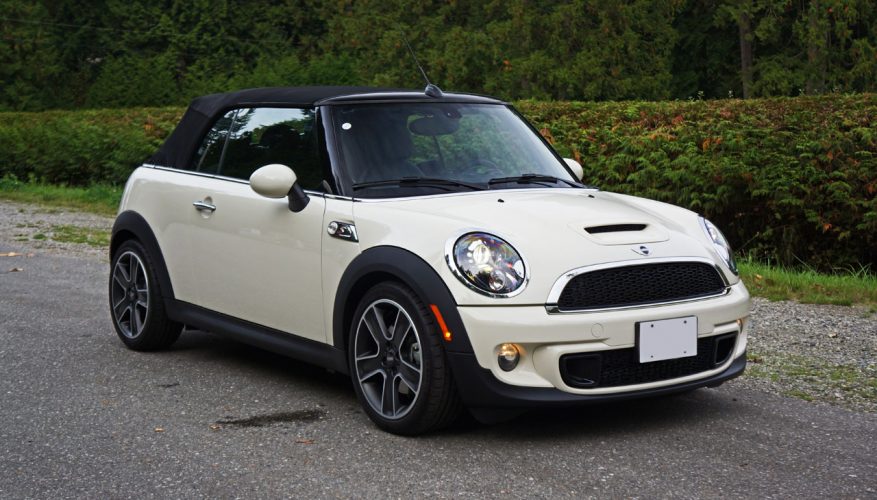 By: Trevor Hofmann
How can you make a Mini Cooper Convertible better than it already is? That’s easy, tag a bright shiny red “S” onto its nameplate.

For years the stylized S on the backside of any Mini model has signified a very worthwhile performance upgrade, not to mention other goodies to go along with its increased price point. The best part is the received reward is much greater than the money needed to move up from the base Cooper, which is why there are so many S-badged Minis zipping around town.

And they certainly zip quickly. Under the stubby little Mini hood is a direct-injected and twin-scroll turbocharged version of Mini’s heady little 1.6-litre four-cylinder, complete with 60 more ponies than the base Cooper at 181 horsepower and 63 additional pound-feet of torque at 177, although on overboost the Cooper S gives its driver a 78 lb-ft advantage! Sure, there’s more performance yet available in the John Cooper Works version, but that little 208-horsepower mind bomb requires a level of investment that makes it a rare sight.

JCW aside, the Cooper S is still great fun to drive through town or out on the open road. It’s the automotive equivalent to a five-hour energy drink, a small container that’s filled full of eye-popping power. While a short-shifting six-speed manual is standard, Mini outfitted my Cooper S Convertible tester with the optional six-speed automatic, but don’t start boohooing on my account. For sure I love the total driver involvement that Mini’s manual delivers, but the autobox is extremely quick shifting in Sport mode, where I left it 90-percent of the time, and its steering wheel-mounted paddles are thoroughly engaging when hard-charging through corners.

I took opportunity to do just that in the pastoral area where my partner and I went to shoot photos. She always enjoys going quickly in a capable car, and the ease that a Mini Cooper S Convertible takes to curves will make anyone feel safe and secure. We wound our way through the beautiful countryside, only a trace of fall colours showing on the few deciduous trees scattered between myriad evergreens, the formers’ leaves still holding fast yet trying their best to match the golden yellow of the twisting lane divider on the inky black stretches of pavement ahead, below and behind.

Our car’s 205/45R17 runflats, while smallish on some vehicles are large for a subcompact (the base Cooper S Convertible is shod in 195/55R16s), and they held their line perfectly, never squirming or making a squealing fuss underfoot and thankfully never veering from our single lane. The Cooper S Convertible’s front strut and rear multi-link suspension setup keeps the car seemingly locked to the road, yet provides a ride that’s much more comfortable than you’d probably expect.

Superb braking is something most would expect from a car that only weighs 1,295 kilos as tested, Mini having upped the Cooper S Convertible’s front rotor diameter by 14 millimeters over the base model to compensate for the sportier drop-top’s stronger performance. The automatic-equipped S Convertible will hit 100 km/h in just 7.4 seconds and the manual in a mere 7.2, which is 3.4 and 2.4 seconds faster than the base model respectively. Top speed also benefits, up 29 km/h to 220 with the auto and showing a 27-km/h improvement to 225 km/h with the manual-equipped car.

The Cooper S Convertible’s abbreviated 2,467-mm wheelbase means that cowl shake and structural shimmies won’t occur at all, such issues left to less rigid longer wheelbase drop-tops. Mini’s ragtop is tight like a little drum, critically important for its raison d’etre, which of course is weaving through serpentine ribbons of tarmac with unbridled enthusiasm. As you’ll already know if you’ve read my Mini Cooper Convertible review, I gave the Cooper S Convertible a fun factor of nine out of 10 (the base Cooper Convertible got an eight and JCW received full marks with a 10), as it leaves a grin on your face even when filling up at the pump.

Yes, fuel economy is another Cooper S Convertible benefit. Despite its much greater performance, when it’s time to refill the S-badged car’s 50-litre tank your wallet won’t get dinged much more than the base model thanks to a claimed rating of 7.7 L/100km city, 5.6 highway and 6.8 combined with the manual or 7.9, 5.8 and 7.0 with the automatic, compared to the base Cooper Convertible’s estimated rating of 7.4 city, 5.7 highway and 6.6 combined for the manual and 7.6, 5.6 and 6.7 with the auto.

Both models will make you rethink your priorities when it comes to baggage, however, as there’s only 170 litres of cargo space in the tiny trunk. But three’s a crowd anyway, right? Lay the 50/50 split-folding rear seats flat and all of a sudden you and your significant other will have 660 litres of gear-toting space at your disposal, which is more than ample for a weekend (or weeklong) getaway.

Traveling in a Mini can be a very rewarding experience, and I’m not just talking about how much fun you’ll have on aforementioned country backroads or like I just mentioned, saving on gas. Rather, all Minis are nicely equipped cars and my Cooper S Convertible tester was downright plush. Even the base Cooper Convertible, which starts at $29,500 plus $2,295 for freight and pre-delivery prep, comes with pushbutton ignition, a multi-function tilt and telescopic steering wheel, power windows with one-touch up/down all-round, automatic climate control, USB connectivity and Bluetooth hands-free, an on-board computer, multi-colour ambient lighting, plus a whole slew of other items expected in Mini’s near-luxury class, not to mention a powered fabric roof with truly useful sunroof capability that allows the front portion of the roof to be left open at speeds up to 120 km/h.

The Cooper S Convertible adds some additional kit to make that trip (and day-to-day life) all the more enjoyable, such as automatic headlamps, an auto-dimming rearview mirror, more comfortable and supportive front sport seats with heated cushions, plus rear parking sonar, while a number of options and packages can be added to keep the love affair flaming long after the honeymoon is over.

My tester featured the aforementioned six-speed automatic transmission that comes packaged with a stylish leather-wrapped sport steering wheel featuring paddle-shifters for $1,300, as well as an $1,850 Wired Package that adds USB and Bluetooth streaming audio, smartphone integration, voice recognition, Mini Connected (which is easily one of the best infotainment systems in the industry, especially if you’re pairing up an iPhone), and a navigation system, all integrated within the big circular central speedometer pod, the needle of which circles around the outside of the infotainment display for a visual that will wow your friends and family.

A standalone option included on my test car was a $750 Harmon/Kardon audio system upgrade that delivered impressive sound, while Mini also included proximity sensing keyless Comfort Access for $390, front fog lights for $250 and rear fogs for $100, plus a $750 Bi-Xenon Headlights with Headlamp Washer package that makes a crystal clear difference while night driving. Lastly, my Cooper S Convertible was coated in a brilliant White Silver Metallic paint costing $590, while the ultra-cool Black Star Bullet alloy wheels added an extra $250 on top of the $990 required for the Sport Package, the latter of which includes the sport suspension I mentioned earlier, plus dynamic traction control and white side marker lights. All of these options added $6,830 to the Cooper S Convertible’s $34,150 base MSRP, for a total equaling $42,980 before tacking on the $2,295 needed for freight and dealer prep.

Additional packages are available, including one that will even dress your Cooper S Convertible in JCW duds, adding everything but the more powerful engine, or alternatively a Mini Yours package that replaces the Cooper S Convertible’s performance-first black on black look with classy light grey detailing inside and out.

While $40k-plus might sound like a significant price to pay for a subcompact ragtop, you need to factor in that a Mini Cooper S Convertible delivers the kind of performance-luxury experience expected from a premium brand, just in a smaller, thriftier and more entertaining package. The little Cooper S drop-top lets you have your cake, eat it and share leftovers with your family and friends. It’s fun, functionality and efficiency combined with loads of luxury and high-tech, for a wind in the hair experience like no other.
©(Copyright Canadian Auto Press)
Car Shopping Tools