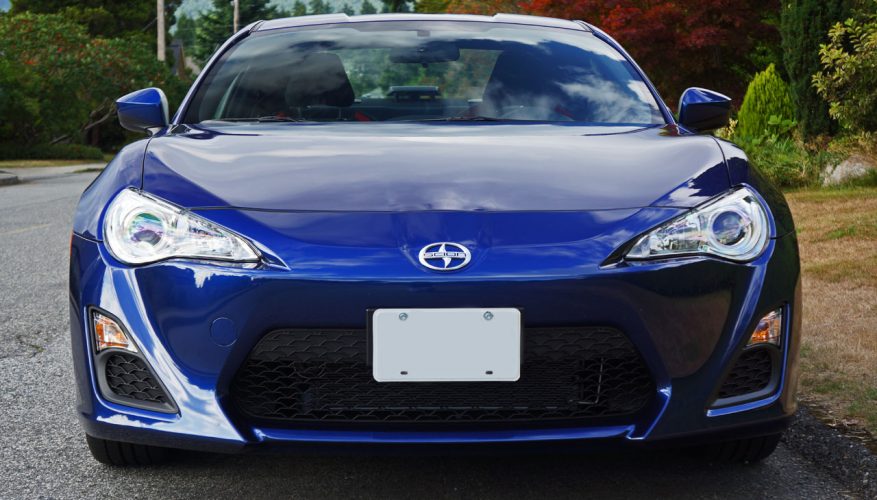 By: Trevor Hofmann
OK, I admit that I was a bit worried when Scion first announced they were changing up the FR-S’ suspension tuning for the 2015 model year. Why mess with perfection? The first two years of this Toyota subsidiary’s flagship were nirvana for drift fans, or any performance car purist with the ability to hang a vehicle’s tail out on a given corner while maintaining control. With some cars this is a recipe for disaster, but with the FR-S it’s been business as usual since the model debuted in 2012 as a 2013 model, made even easier (and safer for drift novices) when the model’s VSC Sport program is engaged. For 2015, getting tail happy won’t be quite as simple.

I experienced this with an updated 2015 Scion FR-S I tested recently. The new model wouldn’t let go as easily from its hind end, but it was markedly faster through the corners. The rear stays locked into position longer, and then when push comes to shove the front end lets go a little sooner, subtly understeering in a more traditional sports car style. All it took was a little corrective steering and pedal work and it was off to the races once again. All in all it’s a more balanced handling experience, brought about by stiffening the front suspension and retuning the rear dampers. And don’t worry it’ll still oversteer. It just takes a bit more speed.

The FR-S’ Subie-sourced, Toyota-massaged flat-four remains the same as last year’s model, with 2.0 litres of displacement, 200 horsepower and 151 lb-ft of torque. I’ve said this before and I’ll repeat it now, it’s all the straight-line performance this car needs. At a hair over 1,250 kilos the FR-S is a lightweight by today’s standards, and its low slung stance makes its 7.5-second sprint to 100 km/h feel quicker than it really is.

Feel is really what the FR-S is all about. There are many faster sports cars. Heck, there are a number of mid-size family sedans that are quicker off the line, but fling a Camry or Accord into a tight off-camber corner quickly and the tail-wagging won’t be the type that’ll make you grin and giggle. The FR-S will simply squirt through without a moment’s notice, its front strut and rear double wishbone suspension helping the car stay flat and 215/45R17s providing ample grip, true and ready for whatever else the road has to throw at it. If you can believe it, the changes made to the 2015 car’s suspension seem to deliver yet more feedback to the driver, making the FR-S one of the most visceral new cars on the planet, the six-speed shifter still a delight to flick through the gears, clutch take-up amongst the best in the industry, and big ventilated rotors ideal for scrubbing off speed.

Looking around the interior, Scion gave the dash a nice new carbon fibre-style facing panel, while the key was redesigned and new automatic on/off headlights added, the latter making the FR-S easier to live with day and night. The rest of the FR-S’ cabin appears identical to the outgoing 2014 model, which is to say that it’s very well built with quality materials, soft-touch surfaces in all the right places, good switchgear, easy phone connectivity, decent Pioneer infotainment, and two of the best sport seats in the industry, my tester’s black with red highlighted shoulder bolsters and red stitching to match the same thread colour used to bind together the leather-wrapped steering wheel, shift knob and boot, centre stack side panel trim, leather-like door uppers, armrests, and soft-wrapped door speaker surrounds. All taken in, the FR-S cockpit is a really attractive near-luxury experience, with sporting style of course.

The base price of the 2015 FR-S starts at $25,950 if you pay cash, as Scion will immediately knock $500 off the top without even haggling. For those planning to finance, the car’s MSRP is $26,450, which is identical to last year’s price despite the revisions, plus there’s $1,495 in freight and dealer prep charges automatically added on to either number. For a very reasonable $1,180 you can “upgrade” to a six-speed automatic transmission with standard paddle-shifters, which while not as engaging as the manual nevertheless makes for a great little sports car. The autobox boasts rev-matched downshifts to make you sound like a pro while keeping the engine in its sweet spot for optimizing corner exits, where you’ll likely appreciate the FR-S’ standard limited-slip differential.

I like that any sort of multi-function steering wheel can’t be had at all, the FR-S instead making its stand as a performance car first and foremost. Just the same it’s far from starkly equipped, with a tilt and telescopic steering column, all the usual powered accessories, air conditioning, cruise control, and the Pioneer entertainment system I mentioned before, which features a 6.1-inch colour touchscreen display, Bluetooth hands-free phone connectivity with audio streaming, auxiliary and USB ports, and eight speakers including two tweeters, two in the instrument panel, a woofer in each door, and two on the rear shelf. My tester included the optional infotainment upgrade, which adds navigation, dynamic audio and text-to-speech functionality.

From a practical standpoint the FR-S is pretty good, at least when compared to two-place competitors. Its rear seats would be tight for most adults, but the majority of young teens should be able to squeeze in just fine. The 196-litre trunk is small, but similar to others in the sports coupe class, while the back seat can be flipped down in order to make room for longer cargo.

Fuel economy? First, disregard last year’s numbers as they were derived from Transport Canada’s old two-cycle testing regimen. Now, all 2015 models need to adhere to a stricter five-cycle testing process, resulting in a much more realistic estimated 10.9 L/100km in the city, 7.9 on the highway and 9.6 combined for the manual, or 9.6, 7.0 and 8.4 respectively for the automatic.

I’m going to go out on a limb by guessing that you won’t be hypermiling your FR-S in order to eke as much fuel as possible from its 50-litre tank. No, FR-S buyers aren’t the same breed as Prius owners despite the same familial bond, and don’t feel guilty about it for a second. Despite its performance-first attitude the FR-S is greener than most mid-size sedans or crossover SUVs, putting less of a dent on the environment while commuting, but then on the weekend you’ll be able to light up a serpentine back road ahead of maximizing your skills while minimizing your lap time on the autocross course. Sports cars don’t get much better than the FR-S, and that this fabulous little track star can be had for less than $30k makes it especially sweet.
©(Copyright Canadian Auto Press)
Car Shopping Tools