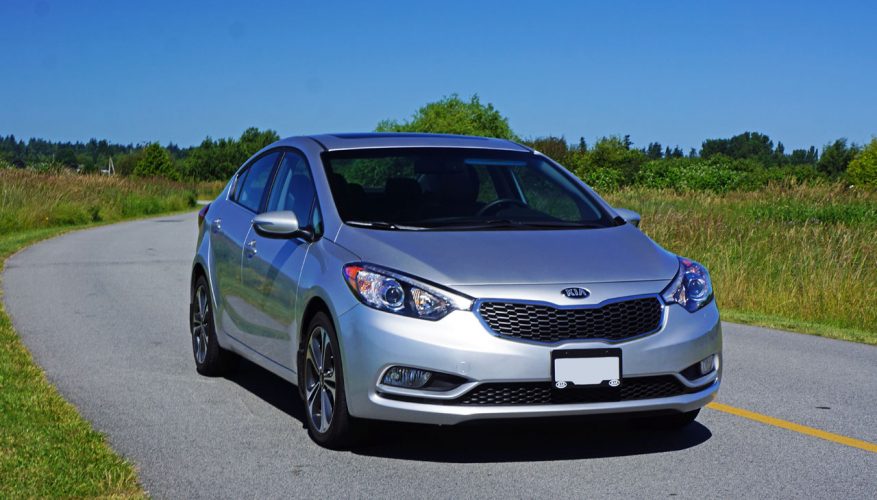 By: Trevor Hofmann
Kia is riding high in newfound popularity lately, for good reason. Its cars look better than most rivals’ offerings, overall quality is good, standard and optional feature sets are more plentiful than the competition, and according to J.D. Power, dependability is at least mid-pack, while its five-year comprehensive warranty beats most peers as well. Today’s consumers aren’t stupid. We recognize good value when we see it, so it’s no wonder the South Korean brand is enjoying sales success.

Nowhere is this more evident than with the sharp looking Forte Sedan. Redesigned for 2014, the Forte has gone from a sporty albeit cute little compact four-door to a sophisticated city slicker. Like its larger Optima sibling, you could put a premium badge on the hood and trunk lid and easily fool those unfamiliar with the car into thinking it’s worth a lot more than its $15,995 base price suggests (plus $1,485 for freight and pre-delivery prep).

Maybe it’s because the base car is so well equipped? While the usual 15-inch steel wheels with covers are included, Kia goes a step further by garnishing them with standard front and rear splashguards, adding solar glass up above and finishing off the look with body-coloured mirror caps and door handles. Those doors get powered locks and windows, while the side mirrors aren’t only powered, but heated too. Climb inside and sit down on the attractive standard black herringbone cloth seats and things get even better, the driver’s seat including height adjustment to accommodate most any body type, the steering wheel both tilt and telescopically adjustable, and if raining, the wipers are variable intermittent. Like I said, the Forte is a class above. Even that steering wheel gets standard audio controls, which connect through to a voice-activated four-speaker AM/FM/CD/MP3 sound system that incorporates satellite radio (with a three-month trial), aux and USB inputs, plus Bluetooth hands-free phone connectivity. A trip computer comes standard too, while the lower console integrates twin power outlets and the overhead console features map lights and handy sunglasses storage, whereas the sun visors at each side are illuminated. Standard safety features include the usual count of airbags plus four-wheel disc brakes with ABS, traction and stability control along with vehicle stability management to make all active safety features work together as effectively as possible, plus hill decent control. The Forte might not make you feel rich, but you certainly can’t lump yourself into the have-not category.

Still, that’s only the base LX model. You can dress it up further with LX+ trim that includes an automatic transmission, fog lamps, turn signals integrated into the mirror housings, 16-inch alloys on 205/55 all-season tires, remote keyless entry, a windshield wiper de-icer, air conditioning, three-way heated front seats, cruise control, two more speakers for the audio system, a sliding centre console armrest with a hidden storage bin, obstacle-detecting front windows, rear climate vents, Kia’s fuel-saving Active ECO system, and a power tilt and sliding glass sunroof for $20,095, or delete the sunroof and instead go with the “Winter Ready” package that includes everything else above plus a remote start, heated leather-wrapped steering wheel, a leather-wrapped shift knob, heated rear seats, a rear armrest with cupholders, winter floor mats, a full-set of winter tires (not installed), and a Kia-branded snowbrush in the trunk for $21,395.

Then again you might not want the automatic transmission, so optionally you can upgrade to the sportier EX that offers the advanced six-speed automatic with Sportmatic manual mode as an option but keeps the more playful six-speed manual standard. For $20,795 the Forte EX truly ups the ante with exterior and interior improvements such as standard fog lights, cool looking LED DRLs integrated into automatic headlights, power-folding side mirrors with integrated turn signals, split-chrome door handles, gorgeous 17-inch machined-finished alloys on 215/45 rubber, and a four-inch stainless steel exhaust tip on the outside, while the cabin gets a nice premium-like soft-touch dash-top and door uppers, cool carbon-fibre patterned trim, upgraded black metallic-embossed upholstery, a supervision primary instrument cluster with an integrated dot-matrix display, an LCD information centre, Kia’s UVO infotainment system with a back-up camera, an auto dimming rearview mirror, and Kia’s FlexSteer system that let’s you adjust steering effort between Comfort, Normal and Sport modes by pressing a button just above the cruise control on the right-side steering wheel spoke, as well as a number of additional items from the various LX+ packages such as keyless entry, the leather-wrapped steering wheel and shift knob, heated front seats, air conditioning, six-speaker audio, cruise control, front and rear centre armrests, windshield de-icer, and rear vents.

I was impressed before even getting out on the road, but as I would soon experience the surprises didn’t stop at the over-the-top Forte SX feature set, high quality finishings and great styling. Instead of the already strong base 1.8-litre four-cylinder engine, good for 145 horsepower and 130 lb-ft of torque, EX models and above get Kia’s enthusiastic 2.0-litre direct-injected four with 173 horsepower and 154 lb-ft of torque, and while I would have truly enjoyed rowing through the six-speed manual’s gears myself, the paddles behind the steering spokes made the automatic a lot of fun too. It gets up and goes with ample energy, and fortunately the Forte’s fully independent suspension setup and my car’s optional 17-inch rubber were up for the task, keeping the car in check even when I pushed it harder than most owners would. The ability to switch between the aforementioned FlexSteer system’s performance modes helped to enhance feel at the wheel as well, its tightest Sport setting where I felt most comfortable throughout my test week. To be clear, it’s not as rewarding a driver’s car as say the Honda Civic Si or VW’s GTI, but it finds a nicer balance between sport and comfort than these performance machines, and that’s what most of us are looking for in a daily driver.

Practicalities in mind, the Forte is accommodating too. It’s truly roomy front and back, while its large 421-litre trunk can be made more utile via standard 60/40 split-folding rear seatbacks.

Fuel economy numbers are 9.3 L/100km in the city and 6.3 on the highway for base model with the manual or 8.8 and 6.1 with the automatic. My tester’s claimed rating is 9.8 and 6.9 for the manual or an even thriftier 9.7 and 6.7 with the auto. And while I’m writing about the 2014 Forte Sedan, the numbers I’ve used are respective to the 2015 model that’s exactly the same but falls under new Transport Canada fuel economy guidelines that require a new five-cycle testing process that’s a lot more realistic than the old two-cycle procedure.

To say that the new Kia Forte Sedan impressed me would be an understatement. Like the brand’s marketing slogan, “The Power to Surprise”, the Forte completely surprised me over and over throughout my test week in the most positive ways, leaving me absolutely nothing to complain about. Yes, it’s no wonder Kia is growing in popularity by leaps and bounds.
©(Copyright Canadian Auto Press)
Car Shopping Tools