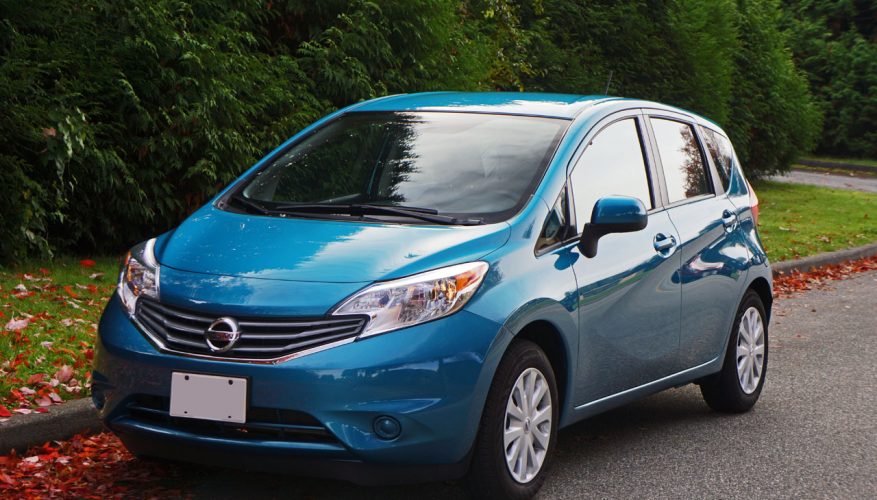 By: Trevor Hofmann
In recent ads, Nissan is touting itself as Canada’s fastest growing automotive brand, and with vehicles like the 2014 Versa Note it’s easy to see why. Compared to the outgoing Versa Hatchback, also a strong seller, the new model is arguably more stylish and obviously more refined, yet while improved in just about every way it remains roomier inside than its subcompact peers, with more comfortable seating, better ride quality and impressive cargo space, is feature-filled for the class it competes in, and is just generally good value.

Those that might be lured in by the model’s upscale styling should know first and foremost that the Versa Note is not a performance car in the slightest. Oh, don’t worry, it’ll accelerate away from a stoplight quickly enough and get you into plenty of trouble with the constabulary on the highway if you’re not paying attention to the posted limit, but it’ll take some time getting there. Of course, the Versa Note was never intended to compete in the hot hatch segment, leaving this niche category to the much more expensive Fiat 500 Abarths, Ford Fiesta STs and Mini Cooper S’s of the world. Rather, the Versa Note plays out its existence in the much larger and more profitable “comfortable and efficient A to B transportation at the best possible price” category. To that end the Versa Note excels. Its seats are extremely comfortable, its ride exceptionally good for its subcompact segment, and handling easily good enough for the class.

The base car rides on the same 15-inch steel wheels with wheel covers as my upgraded SV test car, complete with a set of 185/65HR15 all-season low rolling resistance tires. Vehicle-speed-sensitive electric power steering does a good job of pointing the Note in the direction you want to go, while that nice ride I mentioned a moment ago comes via an independent strut-type front suspension and torsion beam rear axle with stabilizer bars at both ends. It’s a proven setup that again provides adequate handling while its more compact design doesn’t cut too far into interior roominess.

Nissan fits a fairly basic 1.6-litre, DOHC, 16-valve four-cylinder engine under the hood, capable of 109 horsepower and 107 lb-ft of torque; it packs variable valve timing but lacks direct injection or turbos. Its engine output is why I mentioned, “improved in just about every way” in my opening paragraph, because the hatchback it replaces produced a much more stimulating 122 horsepower and 127 lb-ft of torque. While 109 ponies might have elicited excitement from hot hatch fans back in the eighties, now such minimal power merely lets buyers know it’s a car in which performance should be measured in L/100km and not straight-line acceleration.

To that end the Versa Note with its optional continuously variable automatic transmission (CVT) is a gas pump pleaser, achieving a claimed 6.1 L/100km city and 4.8 highway rating via the outgoing two-cycle Transport Canada rating system, which should be used to compare the Note with other 2014 models. Incidentally, the base five-speed manual is rated at 7.4 city and 5.4 highway. The same CVT-equipped car put through the new five-cycle 2015 testing process gets an estimated 7.5 city and 6.0 highway (8.6 city and 6.5 for the manual), which seems more realistic because I averaged around 7.0 L/100km in mixed city/highway driving that included a lot of hills, and while always paying attention to the way I drive to eke out as many miles per gallon as possible, I wasn’t hypermiling one iota. The old more powerful Versa hatch could only manage 7.3 city and 5.8 highway with the CVT, by the way, which should appease most of those lamenting the loss of 13 horsepower and 20 lb-ft of torque.

As mentioned earlier, another Versa Note strongpoint is its value proposition. Even in base S trim its list of features is impressive, with standard items including bright and clear Fine Vision electroluminescent primary gauges, dual power heated side mirrors, tilt (but not telescopic) steering, Bluetooth hands-free phone connectivity, air conditioning set into a simple and easy to use three-dial, two-button and single-slider HVAC interface, four-speaker AM/FM/CD/MP3/WMA audio with an auxiliary jack, RDS, speed-sensitive volume, and illuminated steering wheel-mounted controls, silver accents on the dash and vent rings, fabric upholstery, 60/40 split-folding rear seatbacks, an intermittent rear wiper, stability and traction control, front disc and rear drum brakes with ABS, electronic brake force distribution and emergency brake assist, plus all the usual airbags for just $14,298 as well as $1,567 for freight and pre-delivery prep.

As good a deal as the Versa Note in S trim appears, an even more serious value proposition can be had by moving up to my tester’s mid-grade SV trim, which for only $1,800 more completely dresses up the Note by adding upgraded cloth upholstery with a squiggly wave-like blue and black pattern in the seat inserts that’s really refreshing, plus the same fabric used for the door trim, as well as a leather-wrapped steering wheel, more silver accents added to the shift knob and shifter surround, chrome interior door handles plus chrome-accented centre vents and parking brake detailing, an upgraded Tricot fabric headliner, a six-way manual driver’s seat instead of the base four-way one, a driver’s seat armrest, a glove compartment damper for softer opening, a trip computer and exterior temperature display added to the primary gauge cluster, more upgrades to the infotainment system including hands-free text messaging, NissanConnect with Mobile Apps, streaming audio via Bluetooth wireless technology, satellite radio, a USB port, and a rearview monitor, plus other conveniences such as remote keyless entry, auto-locking power locks, power windows with driver’s one-touch auto-down, cruise control, a rear-seat centre armrest with integrated cupholders, a cargo cover, and an extremely useful Divide-N-Hide adjustable cargo floor. Should I let you catch your breath before we continue?

And that’s just the second of four trim levels, with a sportier looking SR just above which can be had for $2,600 more than my SV, or the more luxurious SL model. Some highlights from the former including a leather-wrapped sport steering wheel, variable intermittent wipers, a five-inch display audio system (optional on my SV), upgraded sport synthetic-suede seat trim with orange accents and stitching, a unique sport grille and darkened headlight treatment, sport front and rear fascias plus extended side sills, fog lamps, LED turn signals integrated into the mirror caps, a rear roof spoiler, 16-inch five-split spoke alloy wheels on 195/55HR16 all-season low rolling resistance tires, and last but not least (as well as not the least bit sporty, so I really don’t understand why Nissan includes it as standard equipment on the “sport” model) a standard Xtronic continuously variable transmission (incidentally also included as a $1,300 standalone option on my SV tester).

The SL isn’t top of the line per se, because it’s only $2,000 more than the SV and therefore a full $600 less than the SR, but it targets a more luxury-oriented buyer and therefore gets the five-speed manual as standard. Seriously? Yes, I’m not making this up as odd as it sounds. Sometimes I just need to give my head a shake. Did the product planning committee that sorted out the Versa Note’s available trim features really come from the same company that produces the fabulous 370Z Nismo and supercar-like GT-R? Then again the GT-R doesn’t come with a manual transmission at all, but its lightning-quick paddle-shift actuated six-speed dual-clutch automated gearbox is certainly no CVT. Of course, those who want an autobox in the Versa Note should take comfort in the news that the CVT is available across the line, so luxury fans can upgrade their SL with the automatic to suitably go along with this model’s less sporty looking 16-inch alloys. Additionally, the SL gets all of the same non-sporty upgrades as the SR, while adding proximity sensing remote access with pushbutton ignition, a more upscale infotainment system that includes a 5.8-inch colour touchscreen with voice-recognition, navigation, SiriusXM Traffic, and an Around View back-up monitor, as well as upgraded cloth upholstery and heated front seats.

No matter how much you fill the Versa Note with features, hard plastic surfaces are everywhere. Yet while not offering some of the soft-touch enhancements as a number of its subcompact contemporaries it’s nevertheless a good looking, nicely finished cabin. What it does better than the other guys is deliver commodious space. There’s more than enough room for large adults, including those who breathe the thin air of the upper stratosphere. Headroom is lofty front and back, while shoulder room and rear legroom is also quite good for the class. If you frequently load up your car with gear, the Versa Note might be your ideal companion due to 532 litres of capacity behind the rear seats and 1,084 when they’re folded flat. And yes, you read that right: the rear seatbacks fold completely flat, unlike some in the segment that leave a big lump where the load floor and seatbacks don’t meet evenly.

At the end of a wonderfully comfortable, relaxed and totally efficient week with the Versa Note, I couldn’t help but be satisfied with it. For a car priced in the mid-teens that comes so well equipped and delivers such excellent fuel economy it would need to do something very poorly to lose my respect, and the Versa Note does nothing poorly at all. It’s totally and completely competent and no doubt perfect for most commuters’ requirements. That it looks so much better than the car it replaces is just a bonus.