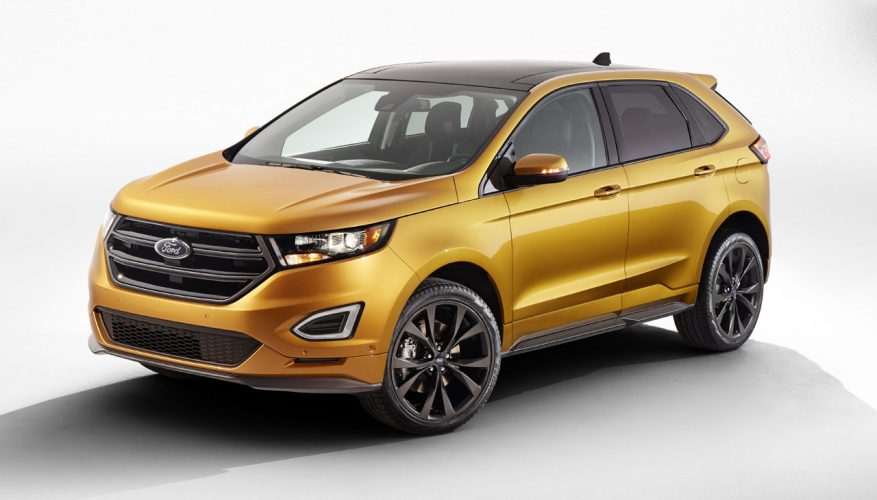 By: Simon Hill
The third-generation 2015 Ford Edge made its worldwide debut recently from the familiar surroundings of the company’s Dearborn, Michigan home, but there was little else familiar about the all-new mid-size crossover’s introduction.

The 2015 Ford Edge introduces several new technologies to Ford’s lineup including adaptive steering, enhanced park assist, side parking sensors, and a front camera with washer. It also introduces a pair of new EcoBoost turbocharged powerplants – a 2.0-litre four-cylinder that produces 245 horsepower and 270 lb-ft of torque, and 2.7-litre V6 that produces 300 horsepower and torque in line with traditional V8s according to Ford. The 2.0-litre EcoBoost engine is the base powerplant, making the 2015 Edge the first Ford product equipped with an EcoBoost engine as standard equipment. A naturally aspirated 3.5-litre V6 rounds out the engine lineup.

All three engines are mated to Ford’s SelectShift six-speed automatic transmission with standard-equipment paddle-shifters. The 2.0-litre engine will be available in either front-wheel drive or all-wheel drive, while the V6 engines get standard all-wheel drive.

Outside, the new Edge is slightly longer and taller than the previous version and it has gained Ford’s now-familiar hexagonal grille at the front, prominent character lines along the side, and a full-width taillight bar at the back. The body structure has been substantially stiffened and the suspension was redesigned to better isolate road imperfections and absorb noise without compromising handling.

Inside, the 2015 Edge is more spacious than the previous-generation model, with greater legroom, headroom and cargo space. It boasts significantly improved materials and design, with the various interior elements arranged to reduce visual cutlines. The dashboard and centre console are designed and shaped to look like one thin, streamlined piece, and a central eight-inch LCD touchscreen supports infotainment functions on many trim levels. The new Edge also features improved interior storage, with a covered media bin on top of the centre stack, a pass-through storage area beneath the climate controls, an open storage area on the instrument panel, and large pockets on each door.

The 2015 Ford Edge will be available in SE, SEL and Sport trims, plus – for the first time – a top-of-the-line Titanium trim. It will go on sale throughout North America in early 2015.