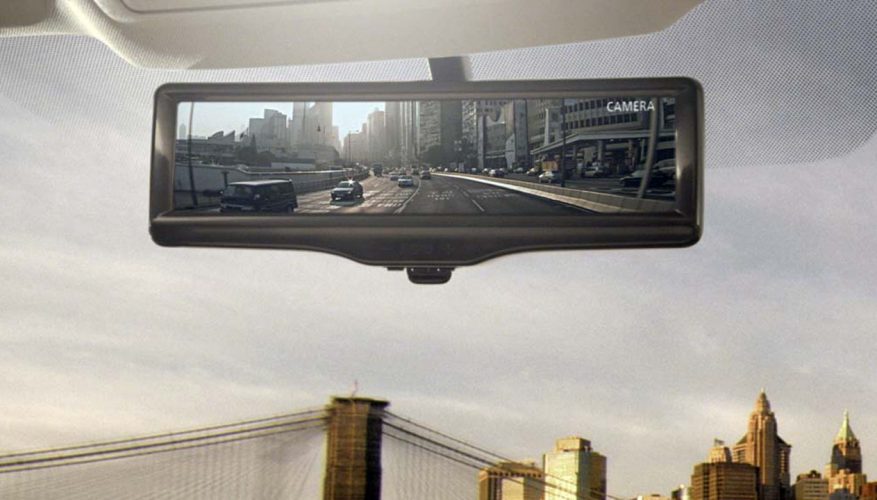 While there’s nothing new about the idea of replacing rearview mirrors with a discreet camera and a monitor inside the car, most efforts to date have focused on door- or fender-mounted exterior mirrors. Two notable recent examples of this include the hyper-efficient Volkswagen XL1 (which won’t be sold in North America) and the sleek, futuristic Tesla Model X (which is awaiting Tesla’s appeal of the current mirror regulations). But while replacing the outside mirrors may offer aerodynamic and stylistic benefits, it doesn’t offer much in the way of functional benefits and relies entirely on the electronics working correctly to provide rearward vision. For the U.S. federal government, the benefits just don’t seem to outweigh the risks.

It can also accommodate for low light situations and glare in a way that conventional mirrors simply can’t, meaning that it can offer superior vision under a wider variety of lighting conditions.

Unlike backup cameras, the Nissan Smart Rearview Mirror is on all the time, unless the driver switches it to conventional mirror mode. And with the camera mounted at about the same height and angle as the display (therefore about the same height and angle as a conventional mirror) the image on the screen is very close to what would be seen in a normal mirror. A menu and buttons allow the driver to adjust the contrast and tilt the camera. Nissan says the most immediately noticeable difference when shifting between mirror and camera modes is that any obstacles inside the car vanish.

Nissan demonstrated the system in a Nissan Rogue with a bouquet of helium balloons in the cargo area blocking rearward visibility. In practice, it was noted that there’s a difference between the mirror and the camera system in terms of colours and contrast, and fast moving objects can sometimes smear slightly. But testers reported that after about 15 minutes of use the video mirror becomes as familiar as a regular mirror – and much more effective if there are passengers, tall cargo or helium balloons in back. Combined with Nissan’s Around-View system, which is a back-up camera offering complete side and rear visibility, the Smart Rearview mirror makes it easy to see surrounding cars and curbs when parking.

Because the Smart rearview mirror offers redundancy and functional advantages, Nissan is optimistic that it won’t require U.S. regulatory permission to install the mirror in U.S. vehicles, which it plans to do in the next couple of years. In this way, the Smart rearview mirror could establish a precedent for the further application of rearview video technology. Already, the NHTSA has embraced mandatory backup camera technology for 2018, so momentum is clearly shifting.
©(Copyright Canadian Auto Press)
Car Shopping Tools