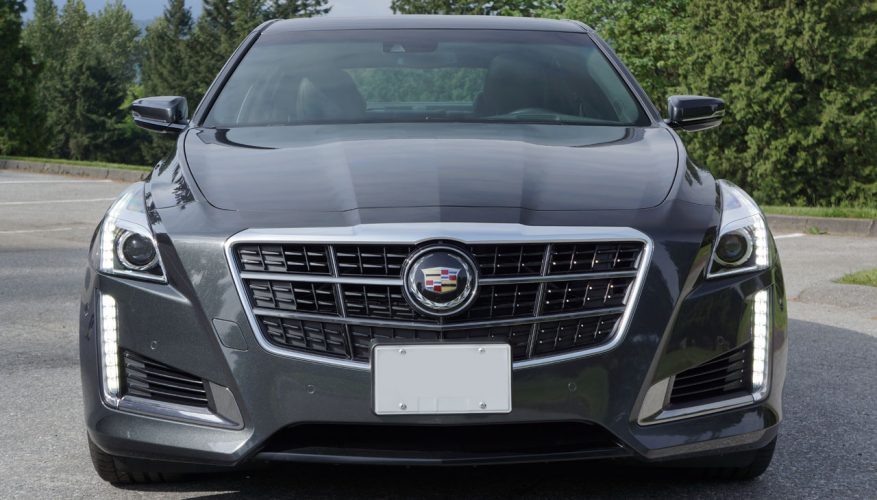 By: Trevor Hofmann
Did you hear the news? Cadillac has come up with an absolutely brilliant way of enticing you out of $75k and leaving you grinning from ear to ear about it. It’s called the 2014 CTS VSport, and it’s friggin’ fabulous!

The other news is the 2014 CTS, a car that’s completely redesigned from the ground up. I loved the previous-generation CTS, especially in Sport Wagon trim. That particular CTS body style is still available, as is a two-door coupe, but the four-door has been totally reworked to make way for the more compact ATS that slotted underneath last year. Now the CTS sedan has grown to take on the A6s, 5 Series and E-Classes of the world, let alone the TL, GS, Q70, XF, et al, and it’s fully up to the task.

When you heard “V6 models” you probably thought that other CTS iterations utilize a V8, but that’s not exactly true. Yes, a V8-powered CTS will arrive sometime later this year or early next with Cadillac’s coveted “V” attached to its alpha designation, but the other engine in the CTS lineup is actually the same lively 2.0-litre turbocharged four-cylinder available in the smaller ATS. That’s the base powerplant, capable of a very reasonable 272 horsepower and 295 lb-ft of torque from as low as 1,700 rpm, good enough for moving 1,640 kilos (3,616 lbs) of luxury sedan up the highway onramp without holding up traffic, while delivering very impressive claimed fuel economy numbers of 10.5 L/100km in the city, 6.6 on the highway, and 8.7 combined in rear-drive trim, or 11.1 city, 7.1 highway, and 9.3 combined when outfitted with optional all-wheel drive, although pricier premium fuel is recommended to extract all of the power out of this engine. The V6 I mentioned previously only requires regular unleaded. It measures 3.6 litres in displacement and makes a perfectly competitive 321 horsepower and 275 lb-ft of torque; yes that’s 20 lb-ft less torque than the four-banger. Its official fuel economy numbers are 11.4 city, 6.9 highway, and 8.7 combined with rear-drive or 11.6, 7.6, and 9.8 with AWD.

My rear-drive-only CTS VSport tester also came fitted with a 3.6-litre V6, albeit with two turbochargers bolted on for an adrenaline inducing 420 horsepower and 430 lb-ft of torque. This is BMW M3 and Lexus IS F territory, as is the car’s lightning quick shifting paddle-shift actuated eight-speed automatic transmission (the rest of the lineup makes do with a six-speed autobox). When starting it up the VSport runs extremely rough, as if there’s a pair of radical racing cams under the manifolds, but it sounds fabulous as its dual exhaust makes a lot of wonderful noises. Soon it smooths out into an edgy idle, letting you know this car was never meant to be anything like your grandfather’s Cadillac. To say the CTS VSport is energetic off the line is doing it a disservice, as the car’s takeoff is breathtaking. Likewise its ability to stick to a tight winding road with super sedan-like temerity is downright shocking, the VSport a five-passenger Universal Studios theme park thrill ride. Specific to the VSport, an extra capacity cooling system keeps engine temperatures low, while an electronic limited-slip rear differential, performance-tuned suspension, staggered front and rear tire widths wrapped around 18-inch ultra-bright machined finished wheels with Midnight Silver painted pockets round out the handling upgrades; the V-Series specific grille just making it look extra special.

Along with Tour, Sport, and Snow/Ice modes, the CTS VSport gets a Track mode as part of its driver selectable Magnetic Ride Control suspension. Track mode increases steering weight, which is already quicker turning in VSport trim, and adjusts the suspension’s calibrations for the best possible handling when pushed to the limit. I took it down my usual unpopulated country back road “test track” and was surprised at how well it took to the really tight, reserved-for-a-Lotus-Elise corners, but this is no featherweight Brit.

Rather, the large American is about as accommodating as cars in the midsize premium E-segment get, with ample room for bigger folks up front and truly commodious rear quarters. To give you an idea, there’s about three inches of headroom left over with my five-foot-eight frame in back. Despite its lengthened rear end, however, the CTS still comes up short on trunk space at 388 litres, with all competitors larger except Acura’s TL.

Cadillac doesn’t shortchange on interior quality, fit, finish and features, though. Truly, the crested-wreath division didn’t just finish the VSport in the usual soft-touch plastic surfacing, but rather it boasts both smooth and perforated stitched leather on the dash top to match the wonderfully comfortable and totally supportive seats, while the door uppers are skinned in leather and suede-like alcantara. Additionally, the dash and door trim is upgraded with what appears like genuine carbon fibre. Very nice. I couldn’t find a cheap piece of plastic anywhere. All pillars are wrapped in the same high-quality woven fabric used for the roofliner, but such is expected in this class.

Also expected, but not appreciated by me at least, is the glossy piano black lacquered plastic that covers the steering wheel and centre stack. This surfacing treatment is showing up in everything from subcompact economy models to top-line luxury cars like this CTS VSport, and while it looks good in the showroom it doesn’t wear well at all, attracting dust and smudges immediately after cleaning and worse, scratching all too easily. The steering wheel hub and spokes are saturated in the stuff, and while constantly smeared with thumbprints its myriad buttons are tight fitting and nicely damped. Even better, the VSport’s chromed metal paddle shifters situated just behind are some of the best the industry offers. They’re ultra-long and therefore easy to flick no matter where the steering wheel is positioned.

The TFT display in front of the driver is very detailed and customizable, although its graphics quality leaves something to be desired. Let’s face it, after becoming accustomed to the utter brilliance of today’s iPads with their retina displays, not to mention most other tablets, laptops, TVs and smartphones on the market, consumers just won’t stand for anything but the highest resolution from our high-priced cars.

The graphics from Cadillac’s CUE infotainment system are better, mind you, and the system is much more user-friendly than it was at launch. Likewise the VSport’s standard audio system sounds fabulous no matter what music you’re listening to, whether picking up the sweetest sibilance from Mozart’s Clarinet concerto in A major or pounding out dance tracks like Pharrell Williams’ Happy (if you haven’t heard that one enough already). Below the audio interface is a highly efficient HVAC system that’s once again ultimately easy to negotiate through, but make sure you don’t touch the Cadillac “V” at its base because it will automatically raise the entire faceplate to expose a handy cubby complete with USB plug. Speaking of powered actuation, the cupholders on the centre console (which include slick looking metal bottoms) can be covered over via a powered leather lid. Very slick, Cadillac.

What wasn’t slick was an auto-braking system that thought a regular-height curb was a wall and joltingly slammed the brakes on to avoid what it felt was a certain fender bender. This would be a great help if there were truly something in the VSport’s path, so better safe than sorry I suppose. Another negative was the need for 91-octane premium fuel, but this is par for the course amongst high-powered sport-luxury cars. The ability to pump without removing the fuel cap is a rare and useful convenience, however.

The CTS VSport is filled with conveniences, as one expects with a Cadillac. Along with the aforementioned VSport upgrades, the car gets the majority of features available with lesser CTS models. For instance, the VSport gets the base CTS model’s E-Z Key passive entry system with pushbutton ignition, heated steering wheel, powered tilt/telescopic steering column, auto-dimming rearview mirror and side mirrors, two-way driver seat and exterior mirror memory, heated front seats, Cadillac’s CUE infotainment system with its eight-inch colour LCD touchscreen, Bose surround-sound audio with satellite radio, remote start, active aero grille shutters, Twilight Sentinel, full suite of airbags including side thorax bags for the outboard positions of the rear seats plus two for the driver and front passenger’s knees, TPMS, and OnStar. The base model even comes with a set of Brembo four-wheel discs.

As mentioned above, all of this performance and luxury doesn’t come cheaply, but then again $74,495 plus $1,800 for freight and pre-delivery prep is very competitive for what Cadillac is offering. I’m guessing that an hour spent behind the wheel of a new CTS VSport will have you quickly forgetting the price anyway, and rather coming up with ways to include the extra cost in your budget.
©(Copyright Canadian Auto Press)
Car Shopping Tools