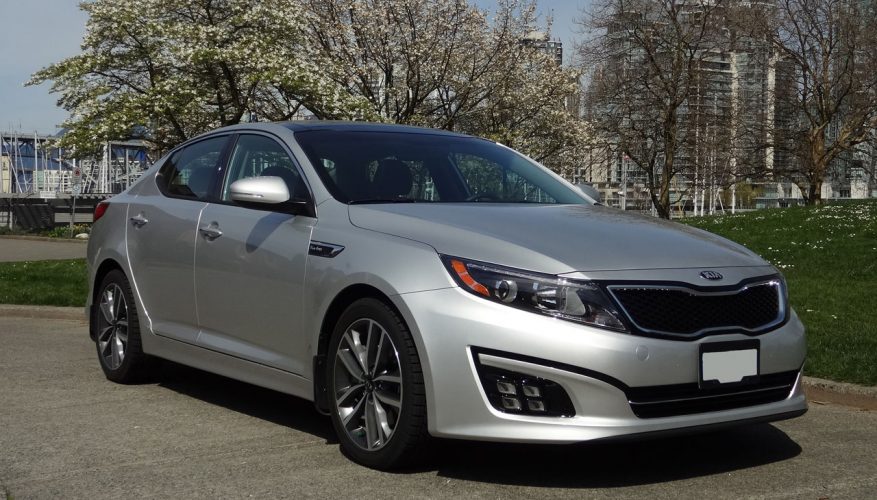 By: Simon Hill
When the third-generation Kia Optima was introduced to Canadians for the 2011 model year, it caused quite a stir. The Peter Schreyer-designed sedan replaced the inoffensive blandness of the second-generation car (which was called the Kia Magentis here in Canada) with bona fide style. Three years later the Optima’s athletic, coupe-like profile still looks pleasingly contemporary, so the Korean automaker has taken a conservative approach to the mid-size family sedan’s mid-cycle refresh.

Externally, the changes to the 2014 Optima are limited to revised front and rear fascias and some trim details (for instance, the decorative fender vents get a chromed slash bezel instead of a horizontal splitter). At the front, the fog light housings have been reshaped to create the impression of a narrower lower grille, and the SX now gets quad-pod LED fog lights. At the back, the taillights have been restyled, the diffuser panel widened, and the lower reflectors moved up a little.

None of the changes fundamentally alter the car’s overall look, and at first glance the casual observer might not notice them at all. I think the front end looks a little busier than it was before (so either more interesting or less cohesive, depending on you viewpoint), while the back end is clearer win, with an edgier, more modern look.

Inside, the 2014 Optima has redesigned seats, and there’s a new larger 4.3-inch colour display screen nestled between the gauges in the instrument panel. Newly available features include blind spot monitoring with cross-traffic alert, and an 8-inch navigation and infotainment screen. The SX Turbo also gets an available drive-mode selector that allows the driver to change the powertrain response and steering weight.

In terms of its mechanical bits, the Optima carries on unchanged. LX, EX, and non-turbocharged SX models get a 2.4-litre direct-injected four-cylinder engine that produces 192 horsepower and 181 lb-ft of torque. SX Turbo models like my test car get a turbocharged 2.0-litre four-cylinder engine that cranks out a V6-worthy 274 horsepower and 269 lb-ft of torque. Both engines are paired with a six-speed automatic transmission driving the front wheels, with the SX Turbo getting paddle shifters and the drive mode selector.

When I picked up my SX Turbo test car I hadn’t yet researched all the changes, but after a reasonably long drive on the highway one of the first things I jotted down in my notes was that the car had "very comfortable seats," so I’ll give Kia a clear win on that front.

The different drive modes – Normal, Eco, and Sport – are accessed via a button under the right-hand spoke on the steering wheel. They work as expected, with Eco mode softening things up and short-shifting for economy, Sport mode firming the steering and holding the engine revs higher for maximum performance, and Normal mode striking a reasonable balance between the two extremes.

Overall, the Optima delivers a comfortable and pleasantly engaging driving experience. The sport-tuned suspension in my SX Turbo test car felt well sorted, providing good handling and a compliant ride over undulating road surfaces and larger bumps. It could sometimes be a little jarring over smaller, sharp-edge bumps, however, and I found the electric steering to be quite numb regardless of what drive mode I used (I don’t imagine it helped that the test car was still fitted with winter tires, even though it was late spring when I picked it up). On the bright side, if there was any torque steer it was negligible enough that I didn’t notice it.

This is especially impressive because the 2.0-litre turbocharged engine in the SX Turbo pulls strongly even from low revs, and in Sport mode will haul the 1,573-kg sedan from 0-100 km/h in about 6.8 seconds, compared to 8.7 seconds for the bread-and-butter 2.4 GDI engine. In terms of economy, my test car was showing a long-term average of 12.4 L/100km when I picked it up and I got pretty close to this during my week with the car, achieving an average of 12.8 L/100km in mixed driving. In practice, I found that this translated to just over 15 L/100km in the inner city, and about 9 L/100km during suburban highway driving. Transport Canada’s official 2014 city/highway ratings are 10.3 / 6.4 L/100km, but using the more realistic upcoming five-cycle test the SX Turbo ends up rated 11.8 / 7.6 / 9.8 for city/highway/mixed driving.

Aside from the comfortable new seats, Kia continues to do a very good job on the Optima’s interior. The styling reminds me of the Audis of a few years ago, with a soft-top dash and door uppers (both front and rear), good quality switchgear, and restrained use of brushed metal trim. My SX Turbo test car featured heated and cooled front seats, a fat, flat-bottomed sport steering wheel, perforated black leather seats with cloth trim, a nice-sounding Infinity premium audio system, and plenty more. The major controls are all logically placed, and I found the infotainment and navigation systems generally intuitive to use.

My one real complaint is that there’s no mid-point stop built into the sunroof/sunshade control: it’s programmed to open the sunshade and then go right ahead and open the sunroof, so if you want just the sunshade open you have to watch as it slides back and stop it manually at just the right moment. The same goes for closing just the roof if you don’t want the shade to close as well. It drove me bonkers. My test car also had a sticky passenger-side power-folding mirror, so you’d sometimes have to manually fold the mirrors and then unfold them again to get it into position, but that counts as a minor glitch that should be easily remedied under warranty.

Space-wise, the Optima’s back seat isn’t quite as spacious as some of its rivals, but it’s still plenty roomy enough for a family sedan, allowing me to fit three tall teenagers back there without any complaints. The trunk will stow 437 litres of gear, and there’s a 60/40 split folding seatback for when you need to carry longer items, but the old-school hockey-stick trunk hinges do take up a certain amount of space when you slam the lid shut, therefore if you’re loading groceries you’ll want to be careful where you pack the eggs.

In base trim the Kia Optima LX starts at $26,180 including the $1,485 destination fee, and comes with all the expected features such as power locks and windows, power mirrors, manual air conditioning, tilt and telescoping steering wheel, automatic headlights, 16-inch alloy wheels, Bluetooth hands-free connectivity, and a six-speaker AM/FM/XM/CD audio system with auxiliary and USB inputs. It also comes with all the safety gear today’s families demand, backed up by solid crash test results (including an "Acceptable" rating for the tough new small-offset front impact test).

The SX trim, which starts at $34,580 destination in, gets most of the EX goodies and adds even larger 18-inch alloys, a sport-tuned suspension, larger front brakes, LED fog lights, and unique body trim. It doesn’t, however, get the panoramic sunroof. The range-topping SX Turbo, as tested, has a base MSRP of $36,280 destination included. This not only gets you the upgraded turbocharged engine and all the gear from the SX, but also the panoramic sunroof. The one thing conspicuously missing, however, is the heated steering wheel, because for some reason Kia decided that it doesn’t work with paddle shifters.

For drivers who like a bit of pizzazz with their family sedan, the Kia Optima offers an alternative to the tried-and-true fleet of Honda Accords, Toyota Camrys, Nissan Altimas and Volkswagen Passats populating suburban neighbourhoods across the country. Sure, the second-generation Ford Fusion and stylish new Mazda6 are giving the Optima a run for its money in the looks department, but three years after its introduction the refreshed Optima remains a good-looking car that provides excellent value for money in base trim, and a real sense of luxurious performance in higher trim levels.