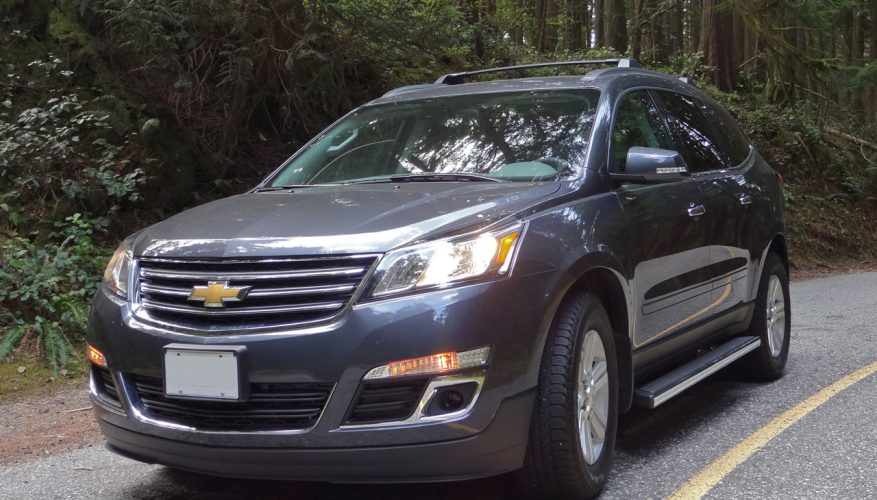 By: Simon Hill
When it comes to big family haulers, there are two schools of thought: those who think a minivan is the way to go, and those who believe a three-row crossover is the better alternative. Chevrolet falls squarely into the latter camp, having replaced its Uplander minivan with the three-row Traverse crossover for the 2009 model year.

Available in either front-wheel or all-wheel drive, the Traverse is a nicely proportioned crossover with a straightforward sense of style and purpose. It has changed only slightly since its introduction, with a refresh for the 2013 model year that saw it get a new (and to my eye far better looking) grille and front fascia, together with redesigned Camaro-like taillights and a refreshed interior featuring improved materials and a restyled dashboard to create a decidedly more upscale ambience. For 2014, the only new changes are the addition of a couple extra USB charging ports, and newly available lane departure warning and forward-collision alert (standard on LTZ models and optional on 2LT trim).

Power for all trim levels, whether front-wheel or all-wheel drive, comes from a 3.6-litre V6 hooked up to a six-speed automatic transmission. The engine produces 281 horsepower and 266 lb-ft of torque in stock form, and the LTZ trim adds a dual exhaust that bumps the power up to 288 horsepower and 270 lb-ft of twist.

On the road the engine and transmission do a perfectly good job of motivating the 2,196 kg all-wheel drive Traverse, and I found that the big crossover had plenty enough power to get ahead of traffic when needed. Acceleration from 0-100 km/h takes about 8.5 seconds, which is pretty good for a vehicle of this size, but you can definitely hear the engine labouring away when you push it, partly because the transmission keeps the revs quite high in order to provide reasonable performance.

Transport Canada’s city/highway/mixed fuel economy ratings for the AWD version are 13.0 / 8.6 / 11.0 L/100km, and in mostly city driving I got north of 15 L/100km which is about on par with what I’ve previously managed in the Honda Pilot, Hyundai Santa Fe, and even the Dodge Grand Caravan in similar city driving.

Ride and handling are better than in a typical minivan or full-size SUV. The Traverse isn’t quite sedan like, but it does have reasonably precise steering, a solidly planted feeling around corners, and a smoothly comfortable ride. It is large, however, and you notice this when manoeuvring in tight quarters. That said, it’s smaller than a full-size Suburban, and not really much different from your average minivan, and it does come with a standard backup camera, which helps a great deal. The brakes react with confidence to provide decently quick stops, and independent testing ranks the Traverse as better than the average crossover in this department.

Inside, the Traverse provides very good room for a crossover. The front seats offer plenty of space in every dimension, although my wife felt that the seat squab was a bit short (I didn’t have this complaint myself, so it’s possible she simply hadn’t yet found the sweet spot with the optional eight-way adjustable passenger seat). Her bigger complaint related to the headrests, which are relatively bulky, extend a fair ways forward and downward, and can’t be adjusted fore and aft. I found them merely a little awkward at times, but for my wife they caused uncomfortable interference with her ponytail no matter how she set her seat.

The middle-row seats generally got good reviews from my staff of teenage critics, or at least they did once said teens finally figured out how to slide the seats aft, which isn’t easy if you’ve already loaded up the cargo space behind them. My 2LT test vehicle was fitted with a 60/40 split-folding second-row bench to provide seating for eight, but second-row captains chairs are the standard arrangement with 2LT and LTZ trims. The LS and 1LT trims get the standard second-row bench as standard, with the captains chairs an option for 1LT trim.

The third row seats offer enough space for a couple of adults for short trips, and good space for a couple of kids for longer trips. Three-across seating is possible, but best restricted to shorter runs with kids. I liked that there was decent elevation between the seat squab and the floor, a dimension that’s often very tight in three-row crossovers.

From a purely practical standpoint, the Traverse offers more cargo space than just about anything other than a full-size Suburban or an actual minivan. With all the seats folded you can stuff 3,293 litres worth of stuff inside, compared to 4,049 litres if you had a Dodge Grand Caravan. With the second-row seats in place there’s 1,991 litres of space, and with all seats deployed there’s 691 litres, which is still enough for a full load of groceries, a nice picnic lunch, or a whole lot of soccer gear. Folding the seats is accomplished quickly and easily with the pull of a single lever or strap for each seatback.

The standard seating material is cloth, with leather upholstery optional on 2LT trim (as in my test vehicle), and perforated leather standard on the LTZ. The dash is soft-surfaced, as are the armrests, console top and a few other bits, but for the most part the interior is built from basic rigid plastic, and I did notice a few misaligned edges at some of the joints. On the plus side, I quite liked the standard blue ambient lighting strips hidden inside the dashboard’s silver-coloured plastic trim.

The 1LT bumps the price up to $39,595 including destination for the front-drive version and adds a few pieces of additional equipment including fog lights, park-assist sensors, 18-inch aluminum wheels instead of 17-inch steelies, body-coloured mirrors and some exterior trim. Inside, the additions are limited to a leather-wrapped steering wheel, eight-way power driver’s seat, and an extra airbag between the driver and passenger. Selecting 1LT trim, however, does open up the options list to allow a lot more à la carte personalization compared to base trim.

The 2LT starts at $43,645 destination in and includes everything from the 1LT plus a power liftgate, auto-dimming mirrors, three-zone automatic climate control, universal garage door opener, heated front seats, second row captains chairs (a bench becomes optional), and a 10-speaker Bose premium audio system with MyLink connectivity, Bluetooth streaming audio capability, Stitcher radio, and independently-controllable rear headphone jacks. The 2LT also opens the options list further, although one option that’s notably not available is pushbutton start – I found it rather quaint to be twisting an old-school key in a vehicle rocking leather seats and a $45K-plus price tag.

LTZ trim, which starts at $49,845 including destination with front-wheel drive, gets everything in the 2LT while adding the power-enhancing dual exhaust, power-folding exterior mirrors, bigger 20-inch wheels, unique exterior detailing, perforated leather upholstery with an eight-way power passenger seat, dual memory settings for the driver’s seat and mirrors, heated and cooled front seats, a heated steering wheel, and the previously-mentioned new-for-2014 standard lane departure warning and forward collision warning. My 2LT test vehicle had these as optional add-ons, and they work as expected, beeping to alert you if you drift out of your lane without signaling, or beeping and flashing if you fail to brake in reasonable time when approaching another vehicle from behind.

My test vehicle also included a whole bunch of other optional equipment including a heavy-duty trailering package (the Traverse can tow up to 2,359 kg), a rear seat entertainment package, navigation, dealer-installed running boards, and the leather seating with eight-way powered passenger seat. In total these extras added $6,515 to the model’s base price (which is $45,045 including destination for the AWD version), for an all-up price including destination of $51,560. That would certainly get you a whole lot of minivan with money left over, but it’s competitive with other similarly equipped crossovers such as the Honda Pilot, Hyundai Santa Fe XL, Mazda CX-9, Nissan Pathfinder, and Toyota Highlander. And let’s face it, if you fall into the crossover camp, a minivan just won’t do.