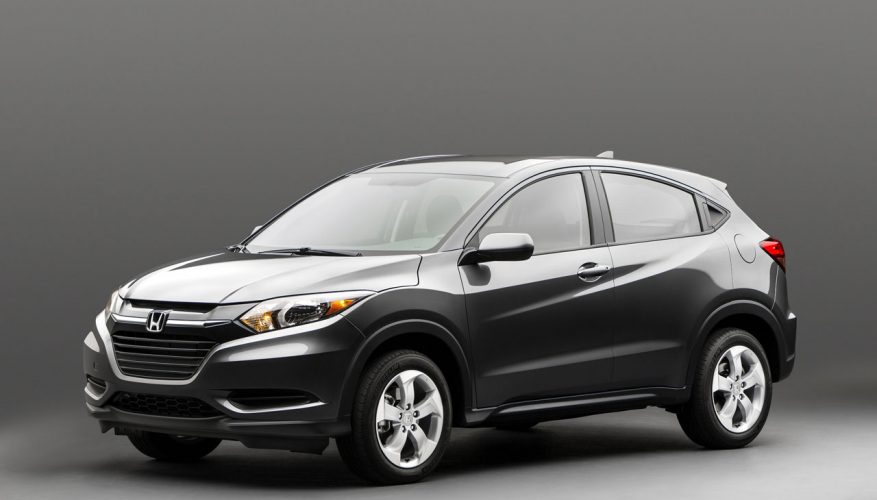 By: Trevor Hofmann
We reported on the upcoming 2015 Honda HR-V at the beginning of this month, only knowing its name and that it would closely resemble the Urban SUV Concept that showed up at the Detroit auto show in January. Now, the New York auto show behind us, we can see exactly what Honda has in store for North American small SUV buyers later this year.

The HR-V is based on Honda’s smallest North American model, the Fit subcompact hatchback. Like the Fit, it’s diminutive in size and therefore capable of fitting into those all-important “Small Car” parking spots, while even more critical will use less fuel than Honda’s larger CR-V and Pilot models. We won’t know fuel economy estimates until later this year when it goes on sale, but we do know that the HR-V is 228 mm shorter, 25 mm narrower, and 25 mm lower than Honda’s ever-popular CR-V, and weighs about 308 kilos less.

The new HR-V will arguably have an edge on some of its competitors in styling, however, its attractive design incorporating a bisected two-tier grille, sharp diamond-shaped headlamp clusters, swoopy upswept belt and shoulder lines, and rear door handles that get hidden within the black C-pillars for a sporty CUV/coupe-like appearance.

Being that the HR-V is based on the Fit, it can take advantage of that model’s impressive rear seating/cargo system dubbed Magic Seat. The Magic Seat folds very flat into the floor for hauling taller than average cargo, while the seats’ lower cushions can alternatively be flipped upright to stow gear in front on the floor, leaving the usual rear cargo area intact behind the seatbacks.

Another Fit opportunity is the potential of a hybrid model for Canada, that little car available in other markets with a gasoline-electric powertrain, as is the Japan-market version of the HR-V, dubbed Vezel, which combines a 1.5-litre engine with a 22kW electric traction motor. While this powertrain option may not arrive here for some time if at all, the regular HR-V will receive the Fit’s 1.5-litre direct-injected four-cylinder engine along with a fuel-efficient CVT (continuously variable transmission). Rumours of a turbocharged variant are hitting the webs, so there’s a possibility of a second more powerful engine down the road. What we do know for sure is that the new normally aspirated HR-V will be available in front- and all-wheel drive.

The new HR-V will also be built in North America, although not at Honda’s CR-V facility in Alliston, Ontario. Rather, Honda’s new production plant in Celaya, Mexico that also builds the Fit will be home to the new crossover.

"Both Fit and HR-V demonstrate how great things can come in small packages, and no one does this better than Honda," said Jeff Conrad, senior vice president and general manager of the Honda automobile division for American Honda. "Together these models also represent Honda’s step-by-step expansion of our production in the region, which has been key to our success in America for more than 30 years."

Honda will have more detailed information about the HR-V closer to its availability this fall.
©(Copyright Canadian Auto Press)
Car Shopping Tools