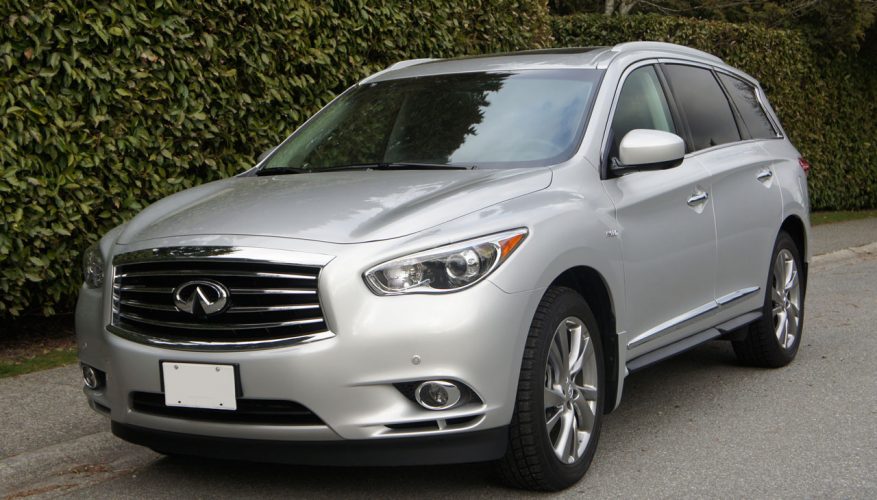 By: Trevor Hofmann
In today’s luxury market, if you don’t find a niche and fill it quickly you’ll lose out to more innovative competitors. Infiniti isn’t unaware of this fact, and while it’s very advanced with technologies it hasn’t taken the ultimately risky first move of creating a given market segment. In fact, Infiniti hasn’t yet entered the popular four-door coupe fray. Rather, Infiniti normally comes to battle in a proven category well armed with attractive design, excellent quality, innovative features and great value. Not a bad plan for a company that’s still devoid of any compact models let alone a full-size flagship luxury sedan. Infiniti might be changing its stripes, mind you, as the QX60 Hybrid fills a niche that’s been empty for a very long time.

No, Infiniti wasn’t first with a hybrid luxury crossover. That title goes to Lexus with its RX, and more recently followed up by the Porsche Cayenne Hybrid. Infiniti is first, mind you, with a seven-occupant luxury crossover hybrid. Certainly Cadillac has offered its Escalade Hybrid for premium buyers who want to haul even larger quantities of people and cargo, but anyone who’s driven that big behemoth truck-based SUV knows that its maneuverability and fuel economy are nowhere near car-like. The QX60 Hybrid, on the other hand, is about as nice to drive as big seven-person CUVs get, with a comfortable ride and comparatively agile handling. Its drivetrain is smooth and powerful, overall quietness and refinement impressive, and equipment level up with the best in the business, while pricing is very reasonable for this class of vehicle.

At $54,500 plus $1,995 for freight and pre-delivery preparation, the QX60 Hybrid is priced lower than many of its competitors base MSRPs, and those are crossovers that don’t offer fuel-efficient hybrid powertrains. That it also comes standard with the same Premium package that costs more with conventionally powered QX60s is another bonus. The Premium designation gives it a heated leather-wrapped multi-function steering wheel, ultra-comfortable heated eight-way power-adjustable front seats with two-way driver’s side memory linked to two individual proximity sensing intelligent keys that allow keyless entry and connectivity to the ignition button, plus leather upholstery, tri-zone automatic climate control, a seven-inch colour infotainment display with a reverse camera, automatic HID headlights, a powered glass sunroof, a powered tailgate, and of course all the usual luxury features expected in this class such as powered windows, cruise control, traction and stability control, a full assortment of airbags, etc.

Also expected in this segment are higher quality soft-touch plastics in all the key areas, and while this is true for surfaces your hands might touch or arms may rest on, the QX60’s dash top remains a harder plastic that looks just fine but nevertheless doesn’t measure up to the class standard. Then again, we come back to price, and I certainly would be willing to live with a minor downgrade in perceived quality in order to save thousands at the time of purchase. The maple wood trim is real, hard-drive navigation with voice recognition extremely good with unique landscape and regular aerial views, AroundView monitor one of the best in the biz, and the 13-speaker Bose AM/FM/XM/CD/MP3 audio system with Bluetooth phone/audio connectivity plus USB and aux inputs absolutely wonderful. Add such features to its German competitors (not that there are any in the seven-passenger luxury hybrid arena, as previously stated), and pricing will soar.

Infiniti does offer options, however, my tester fitted with a $9,000 Theatre, Deluxe Touring and Technology Package combination that adds a seven-inch colour monitor to the back of each front headrest along with a DVD video system for the entertainment of rear passengers, making up the “Theatre” portion of the package; heated and cooled front seats, heated rear seats, a panoramic glass sunroof, 20-inch alloy wheels and more for the Touring package component; and an upgraded 15-speaker surround sound audio system, intelligent cruise control, distance control assist, an efficiency-assisting "Eco Pedal" that actually presses back on your foot if you’re trying to drive too aggressively in Eco mode (a feature that Infiniti claims will reduce consumption between five and 10 percent), remote engine start, blind-spot warning and intervention system, forward collision warning with brake assist, backup collision prevention, lane departure warning, and lane departure intervention comprising the Technology portion of the package. It all makes for a premium level crossover that’s hard to beat, and when mixed with its innovative drivetrain’s superb combination of performance and thrifty fuel economy the QX60 Hybrid is one of the most efficient ways for seven people and their gear to get around town.

I say “around town” because hybrids don’t usually save their owners much money if primarily driven on the highway. A quick glance at this model’s Transport Canada EnerGuide rated fuel economy, which claims to achieve 7.6 L/100km in the city and 6.9 on the highway compared to 10.9 in the city and 7.8 on the highway for the conventional V6-powered QX60 AWD, is evidence enough. You can even do better with the V6 if you opt for a cheaper FWD version, which ekes out an unexpectedly good 7.6 L/100km on the highway and also impressive 10.5 in the city. As you can see, it might be difficult to make a business case for the 0.7 L/100km difference between the Hybrid regular FWD QX60 when driven on the highway, but the city numbers make the case quite clearly in favour of the QX60 Hybrid, with the electrified version a formidable 3.3 L/100km better than its V6 AWD equivalent. That kind of efficiency can really add up, Infiniti claiming a 30-percent improvement over the regular QX60 AWD and 28-percent benefit over the FWD model, making the Hybrid a good choice for urban dwellers.

All of this would be anticlimactic if the QX60 Hybrid was boring to drive, but its 2.5-litre supercharged four-cylinder gasoline-powered engine and 15-kW electric drive motor combine to make 250 spirited horsepower and 243 lb-ft of torque, which compares well to the V6 engine’s 265 horsepower and 248 lb-ft of torque considering the aforementioned pump savings. There aren’t any transmission drawbacks for going the hybrid route either, with both vehicles coming standard with a continuously variable gearbox, otherwise known as a CVT, which is considered one of the most efficient types of transmissions available and thus heavily used amongst hybrids and increasingly popular with conventional powertrains too. Its standard all-wheel drive might be a bit of a drain on fuel economy, although winter driving is never a problem, which is something critical for my ski-addicted family. Likewise for the ABS-enhanced four-wheel disc regenerative brakes, which help to make extra electrical power under braking and don’t feel artificial when doing so, allowing nice progressive stops without being overly abrupt, a problem with some hybrids.

As mentioned, the QX60 Hybrid is spirited off the line, but it doesn’t stop there. It’s also a strong performer on the highway and plenty agile on a curving roadway especially when in Sport mode (the QX60 Hybrid incorporates a four-way driving mode selector with Sport, Standard, Eco, and Snow modes), although I wouldn’t go so far to call it sporty. No, Infiniti has always been clear about the QX60’s objective. It’s designed to be a luxury crossover for families, especially those bordering on affluent that still have small kids, or small grandkids. When Infiniti introduced the regular QX60 (as the JX35, incidentally, the name given to the model before the brand revised its entire naming strategy for 2014), the marketing team included a child seat with each test vehicle just to show we journalists how incredibly functional its 60/40-split second row is. While each side slides forward for third-row access and lay flat for loading longer items, the former process can be done without removing a forward-facing child seat (although you’ll want to remove the child). Any parent of small children will know this is extremely convenient, as child seats are a pain to install even with the “new” LATCH systems that allow you to simply click them into place.

That third row is larger than most in its class, by the way, with room for all but oversized adults, but you might want to slide the second-row seats forward (up to 14 cm fore and aft) to allow ample room for knees and feet. That second-row also includes reclining seatbacks for optimal comfort, and of course the optional second-row seat heaters will get oohs and ahs from your back passengers, my kids enjoying them immensely.

Cargo capacity is a QX60 boon, the Hybrid not giving anything away to the regular model thanks to the same 447 litres of storage space behind the third row, 1,155 litres behind the second row, and 2,166 litres when the two rear rows are folded flat.

As mentioned initially, Infiniti has made a name for delivering attractive design, excellent quality, innovative features and great value, and this QX60 Hybrid will only help foster its good reputation. That the premium Japanese brand is now first to offer a seven-passenger luxury crossover hybrid shows that they’re willing to forge ahead into segments unknown, although it’s probably riskier that its competitors haven’t entered this category rather than a risk for Infiniti to do so. Kudos to Infiniti either way, as the QX60 Hybrid is one very good luxury crossover.
©(Copyright Canadian Auto Press)
Car Shopping Tools