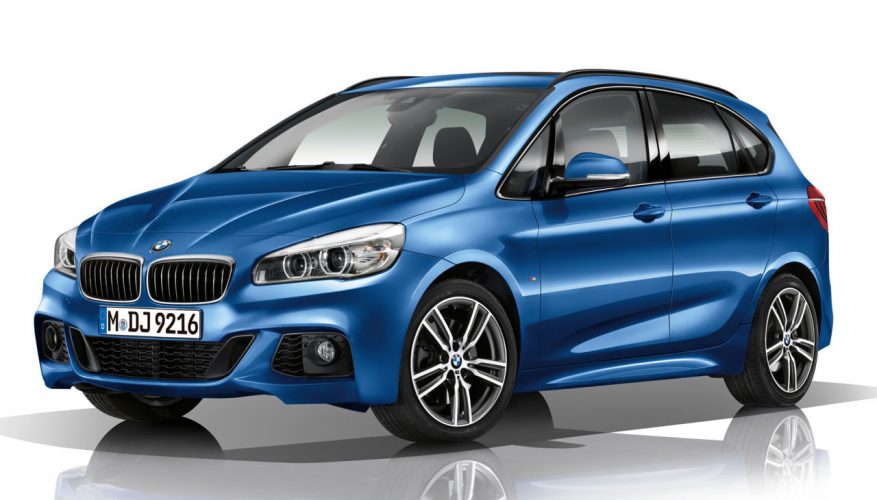 By: Trevor Hofmann
BMW’s latest model has been given the M treatment, not to mention one of the longest names in autodom: 2 Series Active Tourer M Sport.

Attaching the legendary M moniker to the German brand’s first foray into front-wheel drive passenger cars might seem like sacrilege to the Bimmer faithful (the car itself is already causing enough of a stir), but nobody scoffs at the automaker’s Mini division and its Cooper S models, or even better its John Cooper Works (JCW) cars.

Along that vein the 2 Series Active Tourer M Sport will be a zippier version of the company’s new compact five-seater, a tallish MPV that’s more about practicality and pragmatism than any BMW that’s ever come before. Instead of an actual M-badged model, the 2 Series Active Tourer M Sport is more of a sport package, as the name implies, with all the expected upgrades such as a blacked out grille, aero body kit, 17- or 18-inch alloy rims on lower profile tires, a performance-tuned suspension, as well as Alcantara-trimmed sport seats boasting blue stitching to match its Estoril Blue exterior paint.

Will it be a Mini Cooper S fighter? Only time will tell if the 2 Series Active Tourer M Sport will be accepted by fans of the performance-oriented brand, but making that name longer still, with xDrive added to the end, would certainly help heal a few bruised blue and white roundel egos.
©(Copyright Canadian Auto Press)
Car Shopping Tools