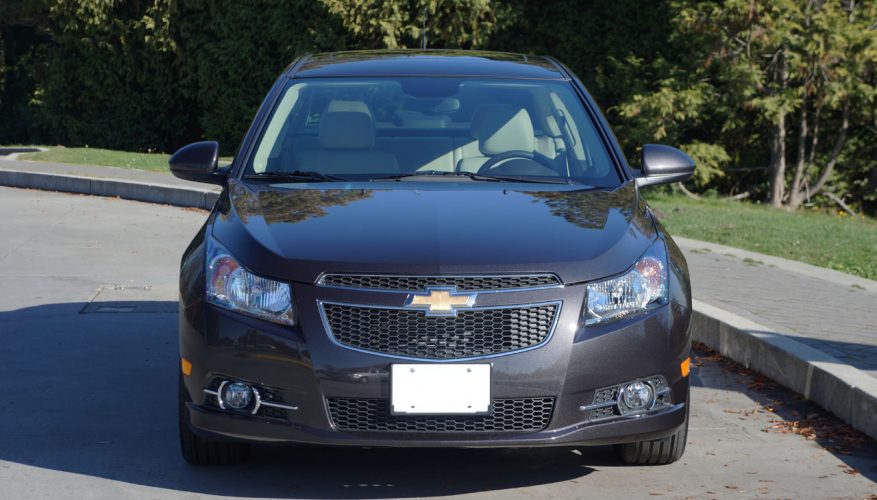 By: Trevor Hofmann
Just one drive and you’ll realize what all the fuss is about. When the Chevrolet Cruze first came on the scene in 2010 as a 2011 model, we journalists were all impressed. Folks, that was only four years ago. I’ve driven at least one new Cruze every year since, and each time I get inside, poke around and then go for a drive I’m reminded just how good this little car is within compact market that’s getting ever more competitive.

Last year I tested one in LT Turbo trim, with a two-tone interior, leather seats, a great sounding stereo and loads of other top-tier features. This time around I received a near identical test car, the only difference being a slightly different shade of gray paint dubbed Tungsten Metallic, a new colour for 2014. Additional new colours include Red Hot, Rainforest Green Metallic and Blue Ray Metallic, with the only other change being the addition of a new 2.0-litre Clean Turbo Diesel engine option.

That latter item is extremely bold for a domestic manufacturer. So far only Volkswagen offers turbo diesel models in the compact class, and has developed a very loyal following by doing so. It’s difficult to say if Chevy’s clientele will warm up to the Cruze Diesel like import buyers do, but they’d be smart to give the fuel-efficient mill a try. After all, it delivers 151 horsepower, which is very good for the compact class, and 264 lb-ft of torque or 280 with overboost, either number being tire squealingly brilliant!

The Cruze’s other two engines are impressive too, with the base 1.8-litre four producing 136 horsepower and 123 lb-ft of torque, and the tiny 1.4-litre turbocharged four-cylinder under the hood of my tester good for 138 horsepower and 148 lb-ft of torque, which is stronger than many in the compact class. A fuel-efficient six-speed manual comes standard across most of the line, with a special Eco version included with the Cruze Eco, while a six-speed automatic comes standard with the diesel and optional across the rest of the Cruze lineup except for LTZ trim, where it’s standard.

The result of all of these high-tech components is good overall performance and great fuel economy, the diesel eking out a highway rating of 4.2 L/100km, which for your information is better than the smaller Golf TDI. City mileage is rated at a claimed 7.5 L/100km, which is still very good. The base engine is hardly a guzzler either, with an estimated rating of 8.2 city and 5.4 highway with either the manual or the automatic, while the 1.4-litre turbo that I tested is good for a claimed 7.8 city and 5.2 highway, no matter the transmission chosen. That special Eco model I mentioned earlier manages a little bit better mileage at an estimated 7.2 city and 4.6 highway with its triple overdrive-enhanced unique manual gearbox, or 7.8 and 5.0 with the automatic. What’s more, all but the diesel require regular unleaded, further reducing your monthly fuel bill. By now we all should know that we can’t expect to achieve these numbers in real-world conditions, the Transport Canada rating system getting an overhaul for the next model year, at which point claimed mileage numbers will better reflect reality, so for now only use them for comparison purposes, as every other manufacturer has to go by the outdated Canadian government guidelines.

As mentioned, the Cruze’s interior is very nice, with lots of soft-touch surfaces and high quality detailing, like the Euro-style woven roofliner that melds perfectly into the optional sunroof. The leather upholstery is better than most offer in this class, too, and the leather-wrapped steering wheel feels good in the hands with comfortable contoured indentations for thumbs and a substantive meaty feel overall.

A switchblade-style key fob fits in the usual steering column slot, lighting up a great looking blue-green on black gauge package and numerous backlit buttons, knobs and switches throughout my tester’s upgraded interior. Also coming to life, Chevy’s MyLink infotainment system is a cut above most peers, with a bright, clear display that has the ability to connect to your smartphone for music, pictures and even navigation. A backup camera was also included in my tester, handy for reversing in crowded parking lots let alone bicycle-strewn driveways, while my tester’s manual climate control system was easy to operate and very nicely laid out. You’ve got to set the three-way seat heaters to your preferred temperature, but once again Chevy ups the ante with more available settings than most of its competitors. All the switchgear used to access these features is top-grade too, and large enough for use with winter gloves.

Urge Overkill’s Sister Havana pumped through the audio system courtesy of SiriusXM satellite radio’s ’90s alternative station Lithium, my tester’s stereo the six-speaker stock setup rather than the optional 250-watt nine-speaker Pioneer upgrade. The basic system worked well enough for me, although give me a week with the Pioneer and I’ll get back to you.

I’d need to move up to LTZ trim to get the better system (or at least get it as a standalone upgrade for $385, or add the $1,485 Sun and Sound package that also includes a sunroof, the latter of which was already included in my tester as a $1,100 standalone option). My car was a 2LT Turbo with a few extras. My tester’s interior was two-tone in Light Natural (beige) and a chocolate brown dubbed Cocoa, leather covering the former (on the seats at least), all part of the Cruze 2LT’s standard equipment package, a trim level that starts at $21,395 MSRP (plus $1,600 for freight and pre-delivery prep). Additional 2LT features include a six-way powered front driver’s seat, Chevrolet MyLink infotainment, satellite radio, 16-inch machined face aluminum wheels on 215/60 all-season tires, and the 1.4-litre turbocharged engine.

A quick glance at my tester and you’ll be able to see the 16-inch rims have been swapped out for 18s in an eye-catching double five-spoke silver-painted design, the tires upgraded to 225/45R18s to match. These come as part of the RS Appearance package, as do the RS badges on the lower front portion of its front doors. Additional RS equipment includes fog lamps, a ground effects package, a rear deck lid spoiler, rear disc brakes, an upgraded compound crank with Z link rear suspension setup, an upgraded instrument panel cluster, and lastly Jet Black leather upholstery. Jet Black? I know that this is strange, as you will remember that my tester included two-tone natural and cocoa leather, which I’ve since been told was a special order. Either way, the RS package is an excellent deal at $1,875.

A number of additional packages and standalone features can be added, with individual items being the aforementioned Pioneer sound system, navigation for $795, front and rear illuminated sill plates for $570, passive entry with pushbutton start for $370, remote vehicle start for $275, an oil pan heater for $100, and a tire pressure monitor for $65, which was actually included in my tester, while many of the items already mentioned in the RS package can be had on the standalone list too, and of course the six-speed automatic transmission that was added to my tester adds an extra $1,495. Additional packages include the Advanced Safety package that adds rear parking assist, rear cross traffic alert and side blind zone alert for $885; the Protection package with all-weather floor mats and an all-weather cargo mat for $225; and a Convenience package with illuminated visor mirrors and an auto-dimming centre light for $180.

I should probably go over the Cruze’s other trim levels so you can get an idea of the best fit for you, starting with the base LS model and moving up through the line. The base LS, at $15,995 plus freight, includes remote keyless entry with power locks, power windows with express-down all-round, power mirrors, tilt and telescopic steering, manual eight-way adjustable front seats, fabric upholstery, a six-speaker AM/FM/CD/MP3 audio system with auxiliary input and satellite radio, a driver information centre, 60/40 split-folding rear seatbacks, body colour door handles, chrome beltline mouldings, 16-inch steel wheels on 215/60 all-season tires, OnStar telematics, ABS-enhanced brakes, traction and stability control, and all the usual airbags plus one for the driver’s knees and two for the rear outboard seats. Above that, 2LS trim adds air conditioning with electronic climate control and air filtration for a total of $18,095.

The next model up the food chain is the 1LT at $19,495, which adds the more powerful and more fuel-efficient 1.4-litre turbocharged engine, plus heated mirrors, cruise control, and driver’s window express up/down. I’ve already gone over 2LT trim so I won’t do that again, therefore we’ll move onto Eco trim that, for $21,095 plus freight, adds the special six-speed Eco manual transmission, an aero package that includes air shutters on the lower front grille, a special air dam, underbody aero panels and a rear spoiler, plus a tire repair kit replacing the spare tire, and 17-inch lightweight alloy wheels on 215/55 all-season low-rolling-resistance tires.

If you opt for the $24,945 2.0TD diesel, along with the engine upgrade you’ll get the same aero package, tire repair kit and 17-inch alloy wheels on low-rolling-resistance tires as with the Eco, plus a standard six-speed automatic, four-wheel disc brakes, and a remote starter.

While all these features sound great, I’m guessing most buyers will go a bit more conservative when outfitting their Cruze, because pragmatic realities usually win out in the compact class. Practicality in mind, the Cruze’s trunk is very large at 425 litres (the Eco gets an even larger 436-litre trunk while the diesel’s is smaller at 376 litres), and as mentioned that cargo area can be made yet more accommodating with its 60/40 split-folding seatbacks.

The 1.4-litre turbocharged engine’s performance is quite strong off the line, seeming to deliver even more get up and go than the numbers suggest, while the Cruze’s ride quality is second to none. On that note I wouldn’t say it’s the sportiest of compact contenders, but I believe that was never Chevy’s mission. After all, while it’s fun to go fast once in a while, and the Cruze is fully capable of winding its way through a serpentine backcountry road, truth be told most of us spend the majority of our driving time on boring inner-city and rural roads, often littered with bumps and potholes that make a suspension setup like the Cruze’s much more enjoyable than any firm, taut alternative. Likewise the Cruze is a superb highway companion, a car that can cruise at high speeds all day long and never tire you out, always feeling substantive and solidly planted while optimally comfortable for the class.

As you can probably tell, I truly like the Chevrolet Cruze. This is a car that verifies General Motors is doing what it takes to maintain strength in the market and, hopefully for their sake, profitability overall. For you, the Cruze is an excellent choice in the compact sedan segment.
©(Copyright Canadian Auto Press)
Car Shopping Tools