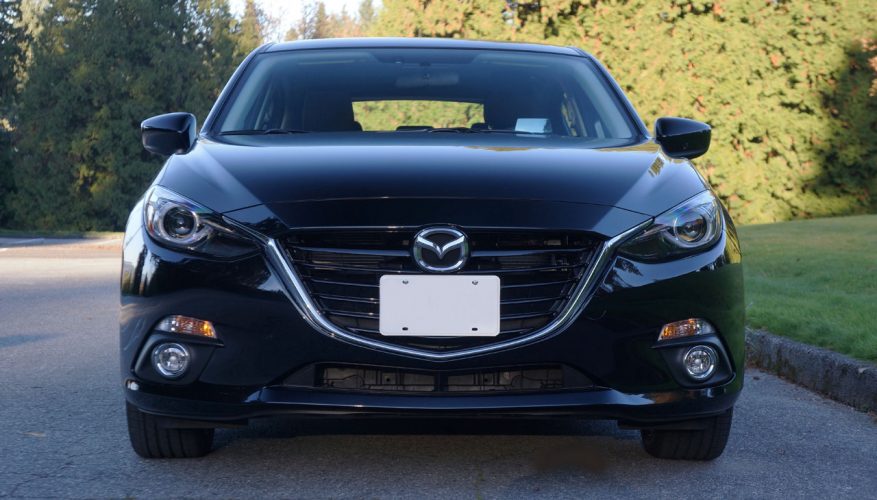 By: Trevor Hofmann
If there was ever a question as to whether Mazda is trying to bridge the gap between mainstream and premium the new 2014 3 is the answer. In some ways it even bests German luxury brands and in most cases it squarely beats its similarly priced competition.

The upscale treatment is best experienced in the 2014 Mazda3 Sport GT, top of the line in the go-fast Japanese company’s compact arsenal. Yes, there’s no Mazdaspeed3 this year, our fingers collectively crossed for the return of the tire-shredding beast along with (hopefully) some of the refinements of this new naturally aspirated regular 3 included. These refinements boast a higher quality full soft-touch dash-top plus soft-touch front door uppers, much better electronics including a BMW iDrive-like lower console-mounted rotary controller that Mazda calls HMI (Human Machine Interface) Commander Switch and BMW-like fixed colour screen protruding up from the centre dash-top, plus a heads-up display unit in front of the driver, even nicer switchgear than the outgoing model and some of the most appealing interior and exterior styling in the compact segment.

If you like the new CX-5 compact crossover utility and Mazda6 midsize sedan, you should feel much the same about the compact Mazda3. Like in previous years, it comes in four-door sedan and five-door hatchback body styles, the latter dubbed Sport here in Canada. My Sport came in top-tier GT trim, which means its stylish new headlights get bi-xenon beams while attractive 18-inch alloys inside 215/45 all-seasons round out the bottom half of the design. The aforementioned heads-up display is included in GT trim too, as is navigation within the infotainment system, plus proximity sensing access with pushbutton ignition, dual-zone automatic climate control, as well as paddle-shifters to actuate the new standard six-speed automatic transmission; the six-speed manual available with the base GX and mid-grade GS can’t be had with the sportiest GT model. Go figure?

The slick-shifting autobox mates up to a larger 2.5-litre direct injection SkyActiv four-cylinder engine good for 184 horsepower and 185 lb-ft of torque, enough to get the little 3 moving along at a quick clip. I drove a GS model prior to this GT and the extra 29 horsepower and 35 lb-ft of torque makes a big difference, although keep in mind when testing that it feels like an average fuel-efficient hatchback until driven hard in Sport mode, when it really comes alive.

The chassis is easily up to the workout, the Mazda3’s front suspension made up of MacPherson struts, coil springs and a stabilizer bar and rear setup incorporating multi-links, coils and another stabilizer for full independence, with plenty of lightweight aluminum used in construction. The car’s rack-and-pinion steering is very direct and accurate feeling, and includes rpm-sensing variable power assist that gives greater control at all speeds. Getting hard on the brakes results in quick stops thanks to four-wheel discs with ABS and electronic brake force distribution as well as traction and stability control, while you can even upgrade the GT to include i-ELOOP regenerative braking, a system similar to those used in hybrids that pulls otherwise wasted energy created during braking and reroutes it to ancillary electrical systems that otherwise would add drag to the engine.

The i-ELOOP regenerative braking system comes as part of the $2,500 Technology Package, which also includes some premium-level equipment that once again reminds us of how Mazda wants to bridge that gap between mainstream and luxury. Top of the list is High Beam Control that automatically turns on the high beams on darker roads and then returns to low beams when an oncoming car or taillights are detected ahead. Those headlights are also self-leveling and adaptive allowing better visibility ahead and mid-corner. Blind Spot Monitoring and Lane Departure Warning are also included, as is Smart City Brake Support that first warns the driver and ultimately applies the brakes if a panic-braking situation is detected. Lastly, the Technology Package adds satellite radio.

Of course, the GT also includes some of the features in the lesser GS trim, such as a six-speaker HD radio, trip computer, cruise control, rear seat armrest with cupholders, and new this year the infotainment system I spoke of earlier, which uses a very clear TFT colour display and comes with a very handy rearview camera. Also included is an SD card slot, the HMI Commander knob I spoke of earlier, and turn signals integrated into the side mirror housings. Things upgraded from GX trim when getting a GS include standard air conditioning, 16-inch alloy rims and a rear spoiler (on the sedan).

A GS Convenience Package can be added, which gets more features that come standard with the GT such as three-way heated front seats that can really get hot, heated mirrors, a leather wrapped steering wheel, shift knob and parking brake handle, and rain-sensing wipers. A Moonroof Package can be added too, including the moonroof, of course, and fog lights.

After all that I’d be remiss not to tell you about the standard Mazda3 GX features, so here goes. The 16-inch wheels are steel, windows and locks powered, the latter via a remote, while the mirrors are powered too. The steering wheel gets tilt and telescoping functionality as well, nothing new here. But wait a minute, entirely new for the baseline 2014 Mazda3 GX are auto-off headlights, Bluetooth hands-free phone connectivity, and a dual exhaust system for that also new 155 horsepower 2.0-litre SkyActiv four-cylinder engine and six-speed manual SkyActiv gearbox I mentioned before, vastly improving life at the bottom of the 3 line.

As good as the base car likely is, I was fortunate enough not to suffer through such rudimentary transportation, instead enjoying the good life in a Mazda3 Sport GT. I know it wasn’t a manual, but shifting through the automatic gearbox was made as enjoyable as possible via manual shift mode that actually holds redline if pushed to its rev limiter. The engine pulls strong and the car feels light and nimble, even more fun to toss around than the old 3 GT, yet the ride is somehow more comfortable too.

Speaking of better, the navigation system now tells you which streets you’re passing even when it’s in audio mode, and other aspects of that infotainment system are just as advanced. For instance, the radio has a program that will find all the local stations automatically for you, almost like Audi’s MMI system. The only problem is that it doesn’t always find all the stations, omitting even the very strong ones, and oddly it doesn’t put them in any sensible numerical order, instead just randomly placing stations all over the place. As mentioned, the big rotating HMI dial used for accessing the infotainment system works a lot like iDrive or Audi’s MMI. Three buttons surround the controller for quick access to Home, Radio or Navigation settings, plus a return button. The volume button is to the right, but of course I was more inclined to use the volume switch on the steering wheel spoke. And remember I mentioned the heads-up display a couple of times before? Mazda actually calls it Active Driving Display. At first I thought it only showed the vehicle speed, which would have been totally redundant because about five inches below is the exact same digital speedometer readout, albeit not in bright blue. In actual fact its other functions are only used if employing other functions or in case of emergency, such as the speed settings while using cruise control, turn-by-turn navigation directions, distance and lane guidance, lane departure warnings and operation, and panic-braking warning and operation. Impressive.

Yes, that’s a lot of trick content for a compact hatchback, which is why I was surprised that the Sport GT didn’t come near the $35k threshold. The fully loaded car I tested was priced much more reasonably at $30,855 plus $1,695 for freight and pre-delivery prep, while the regular Sport GT starts at $26,855. For those wanting a great car without all the premium features, the base Mazda3 GX sedan can be had for as little as $15,995 plus destination.

Add extremely efficient operation from either engine to the low entry price and things look even brighter. The best economy comes from the 2.0-litre engine that’s good for a claimed 6.7 L/100km city and 4.8 highway when mated to the optional automatic, although the 2.5-litre mill I tested is still efficient at an estimated 7.3 city and 5.2 highway, or better yet the GT with the i-ELOOP regenerative braking system is said to get 6.8 city and 4.9 highway; all use cheaper regular unleaded.

Other practicalities include a roomy interior that seats four adults comfortably and five in a squeeze, plus cargo space under the hatch is quite accommodating at 572 litres behind the rear seats and 1,334 when the 60/40-split seatbacks are folded flat. The sedan’s trunk can hide away 350 litres of gear.

So how do I like it? While not perfect, the new 2014 Mazda3 might just be the best compact car in the entire mainstream segment, so much so that I’m once again trying to decide if it’s good enough to be classified in with many of the premium compacts when outfitted in GT trim. I’m leaning towards the latter, but its price pulls me back to the former. It’s just a label anyway, so who really cares. The truth is, the 2014 Mazda3 Sport GT I drove is as good as compact cars get.
©(Copyright Canadian Auto Press)
Car Shopping Tools