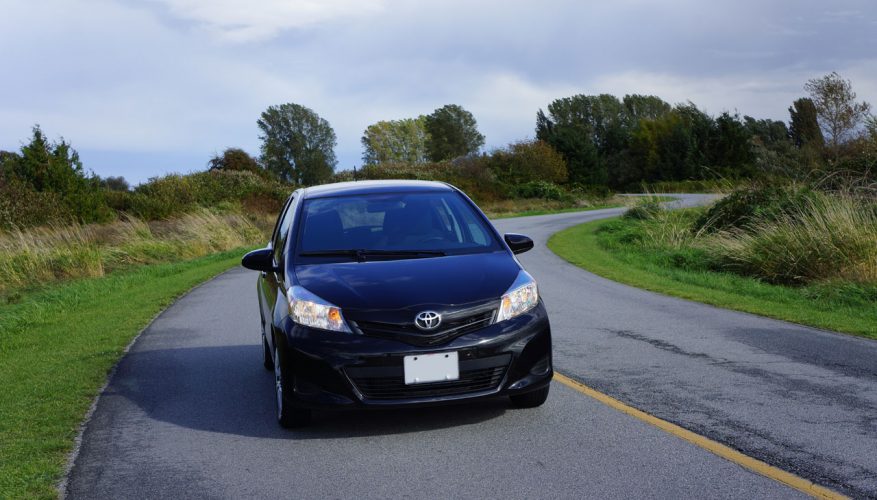 By: Trevor Hofmann
You’d think that a week in a relatively simply subcompact would be boring, but the 2014 Toyota Yaris was anything but. And no, my tester wasn’t the 414-hp Yaris Hybrid-R Concept that’s been wowing attendees at auto shows in recent months, but rather a bone stock mid-pack Yaris LE Hatchback with (yes, sigh) an automatic transmission.

It would have certainly been more engaging with a five-speed manual, the standard transmission offered, the optional choice being a four-speed automatic sans manual mode, but somehow this little tike put a smile on my face every time I took to a set of winding corners. Putting throttle to the floor won’t exactly pin you to the back of your seat, but the Yaris’ 16-valve, DOHC, 1.5-litre four-cylinder’s 106 horsepower and 103 lb-ft of torque definitely made light work out of the Yaris Hatchback’s 1,020 kilo mass, which is part of the reason why it felt so good in the curves. Again, nothing radical at all under the floorboards, just MacPherson struts up front and a Torsion beam in the rear, but the way Toyota has sorted it out makes for some very entertaining driving.

I’ve already told you if this were my very own Yaris I’d opt for the stick shift, but I must add that I’d go for SE trim too. It replaces the base model’s steel wheels on 175/65R15 all-season tires with sportier 16-inch alloy rims on 195/50 all-seasons, while adding more comfortable and supportive sport seats, and a leather-wrapped steering wheel with cruise and audio controls, the latter connecting through to an upgraded six-speaker stereo, plus keyless entry, power windows, air conditioning, and an intermittent rear washer/wiper for convenience’ sake. Last but not least, a sportier skirt package, rear spoiler and fog lamps dress the Yaris SE up to look much more appealing.

Just the same my tester was painted black for a serious, purposeful look. It included the SE’s keyless entry, powered windows, air conditioning and cruise control as part of a $900 Convenience Package, which was nice, along with additional LE features such as heated power-adjustable mirrors and a tachometer set in the instrument binnacle. These get added to the base CE’s impressive list of standard features, which include four-speaker AM/FM/CD/MP3 audio with aux and USB ports, Bluetooth hands-free connectivity, powered locks, intermittent wipers, a tilt steering wheel, digital clock, multi-information display, cloth seats, rear washer/wiper, front and rear splash guards, ABS-enhanced brakes, traction and stability control, and a full allotment of airbags including one for the driver’s knees. Air conditioning can be added as a standalone option.

As important as its features, or maybe more so, is the Yaris accommodating personality. It’s extremely comfortable for four adults and can fit five in a squeeze (not so much of a squeeze if there’s a child in the middle), while it’s a decent gear hauler with 286 litres behind the rear seatbacks or 441 litres made available if you tumble those 60/40-split dividers down; 433 litres in the three-door hatch.

Yes, two body styles are available, a three-door (two-door plus hatchback) only available in base CE trim and a five-door in LE and SE trims, and just in case you were wondering, zero changes have been made to the Yaris since last year and other than the sedan being discontinued, not a lot since the model year before that when it was introduced as an all-new model.

Critics knock the Yaris for its older tech drivetrain. I’ve already mentioned its transmissions, the manual being short a highway gear compared to most rivals and the automatic missing up to two forward gears when compared to regular torque converter autoboxes or dual-clutch automated transmissions offered by subcompact competitors, not to mention infinite cogs compared to those with continually variable transmissions. The same Yaris with a six-speed manual, six-speed auto or CVT would no doubt deliver better mileage, but the current car does very well just the same at a claimed 6.6 L/100km city and 5.2 highway with the manual or 6.7 and 5.5 with the auto; my real world results were closer to the U.S. EPA’s combined metric-converted rating of 7.4 L/100km. Either way that’s great economy, but what might matter even more to would-be buyers is Toyota’s claim of “Epic Reliability”, which isn’t just a crafty marketing ploy. The marketing works because the automotive market knows its true, and I’ll take diehard dependability over slightly better fuel economy any day.

That all the Yaris’ reliability, well equipped and nicely refined interior, great handling and sharp styling starts for only $14,255 plus $1,495 for freight and dealer prep is reason enough for it being such a big seller. My LE automatic tester with its Convenience Package upped the ante to $16,995 plus freight, while the sportiest SE automatic starts at $20,255.